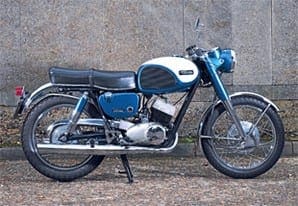 If the bike in camera this month looks a little old fashioned that’s only because it is. The YDS3 was the machine which brought Yamaha to thepublic’s attention in Britain. It was late 1964 and the timing could not have been better for Yamaha’s sales and marketing team coming hot on the heels of the racing success that year with Yamaha taking the crown in the 250cc class. It was also the first Yamaha model to be sold in substantial numbers globally.

The YDS3 was well received by most of the motorcycling press of the day, road test features in the magazines generally gave a very favourable impression of the bike. Positive media coverage did much to boost sales from 1965-67.

Visually the YDS3 was significantly different from contemporary Hondas and its two main colour schemes – either in blue or red with a white pearlescent pattern on the fuel tank – instantly set it apart. There was also a more conservative black with a fern silver tank pattern and side panels option, but this was imported in much smaller numbers.

The YDS series was based around the German MB250 Adler but with substantial updates. The most significant was the fitting of Yamaha’s then new and revolutionary automatic two-stroke lubrication system; the now famous ‘Autolube’. Although common place now, the system changed how many potential buyers genuinely saw two-stroke motorcycles; the days of premix were over. Metered oiling substantially reduced the possibility of an engine seizure due to an inadequate supply of oil, or plug fouling from too much of it.

'Further attention to detail was evident with lubrication nipples on several of the control cables (the tool kits even contained a cable oiler just like a grease gun), grease nipples on every pivot point plus ingenious touches like the luminous ignition switch cover to aid insertion of the ignition key in the dark.'

Ease of use and quality engineering were very obviously key goals for the Yamaha R&D team. The new model had a revised duplex frame, a five-speed gearbox, three way adjustable rear shock absorbers, twin leading shoe front brake, adjustable friction steering damper, steering lock and a tyre pump all as standard equipment. Less obvious, but no less important, there were cush-drives in the gearbox and the rear hub to reduce transmission snatch.

Further attention to detail was evident with lubrication nipples on several of the control cables (the tool kits even contained a cable oiler just like a grease gun), grease nipples on every pivot point plus ingenious touches like the luminous ignition switch cover to aid insertion of the ignition key in the dark. ‘Idiot’ lights in the combined speedo/tacho informed the rider of charging, neutral and high beam status further enhancing ease of use.

In 1964 this all amounted to one seriously impressive and well thought out motorcycle for your £272-19s. The price was evidently aimed at taking the wind out of Honda’s sails.

The bikes quickly gained a reputation for being the fastest 250cc two-stroke on the street and it wasn’t uncommon to hear reports that they could, and would, often out-accelerate British bikes more than twice their cubic capacity. Although the crown was then taken a year or so later by the arrival of Suzuki’s T20 Super Six the DS3’s reputation remained formidable.

At the start of the Classic Jap movement the Yamaha twin proved to be a popular bike for the early restorers within the nascent scene. Parts supply was surprisingly strong and many examples that had been laid up were readily and easily restored or recommissioned. Times have changed over the last three decades and the YDS3 has probably fallen out of favour which is sad at best and heinous at worst. The bike is still as viable on the road as, say, a Honda CB72 and the worst that can be said about it is that its crankshaft mounted clutch is a little grabby.

Although Yamaha had manufactured bikes previously with gear train mounted clutches the return to the engine speed clutch was allegedly for increased torque, this also explains the width of these engines. If the motor needs a few more revs in order to get going then so much the better; it’ll give you, the rider, the chance to hear that amazing exhaust.

It’s not for nothing that period road tests sought to capture the combination of inlet roar and exhaust note. Perhaps the best analogy was likening the YDS3 to an angry wasp. The good news is that unlike the insect it doesn’t matter how much you goad the Yamaha it won’t attack you. Surprisingly civilised for a period sports machine the YDS3 still makes for good all-round lightweight Japanese classic today. If we were in the market for an early Oriental stroker we’d be giving one of these very serious consideration here at CMM.