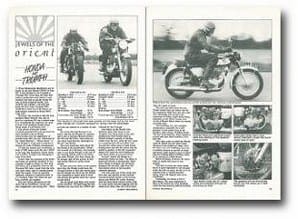 When Motorcycle Mechanics got its hands on the new Honda CB450 in June '66, it was decided to run it against a Triumph 500. Good idea, but they then chose a production racer which, it was claimed, had had no special tuning but was, in those immortal words, 'just carefully put together'. All well and good, but how many Triumph 500s would have come out of the factory as meticulously prepared as Ernie Hall's Tiger 100?

However, the conclusion that the fully equipped Black Bomber was only as good as a sporting 500 has a double edge to it, considering the relatively low state of tune of the standard Honda motor. Never mind, it's all history now… The arrival of the new double overhead camshaft 450 twin has been the most heralded event in British motorcycling since the appearance of parallel twins after the war. Publicised as the "Black Bomber", "Black Hawk" or " The Dragon", it has sent a cold shiver through the ranks of British manufacturers.

To find out exactly how it performs, a team of MM testers took the new CB450 to the long, fast Snetterton circuit, along with a 500 cc Triumph twin belonging to tuner Ernie Hall. 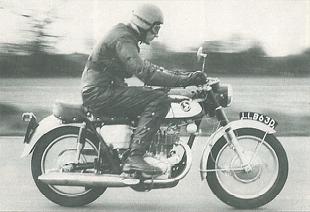 Emie's bike was selected as the motor and frame are perfectly standard. It was originally bought by Ernie in 1959 from the factory as a production racer for the Thruxton 500 miler. Apart from the twin carb splay head, there is nothing special about the engine. It has no specially lightened, polished or balanced parts. It is a standard Tiger 100 which has just been carefully put together.

The only frame alterations are the usual clip-on handlebars, racing seat, plus megaphones and racing tyres — fitted as Ernie has entered in a number of club races.

We chose this bike because it so nearly matches the Honda for capacity, and is also a typically British product; the 500 and the 650cc class bikes are also those most directly challenged by the new big Honda.

The most shattering thing about the big Honda is the acceleration. Within two seconds of a full-bore, tyre-burning start, it was doing 30mph; at the end of the standing quarter mile it was doing just under 90mph. The front wheel can be brought right off the ground in first and second which are pretty close ratioed.

In neck-and-neck starts on the quarter mile strip, the Honda could leave the Triumph behind in first and second gear, but the change into third saw the British twin beginning to steam away in front and passing the quarter mile line a good second ahead.

On top speed, both bikes were pretty evenly matched. 102mph being the best obtained one-way from the CB450 and 104mph for the Triumph.

The brakes on the Honda were infinitely better than those on the Triumph. Too much meat on the twin leading shoe front Honda brake at 30mph brought a squawk of burning rubber from the tyre, while the rear came to a smoking halt with incredible ease. An odd fact which came to light during braking tests was that the clutch must be pulled in quickly, or the still connected engine will cause the most frightening rear wheel judder as you slow down.

Turned out
In every respect the Honda is a beautifully turned out bike. The finish of black and chrome is immaculate, while every fitting is compact and obviously designed into the bike, right from the twin mirrors down to the eccentric camshaft adjusters.

The twin carbs are 32mm choke KeiHin units and operate on the constant vacuum principle similar to the moving piston type British SU carbs. Starting with the push button electric starter calls for some pretty accurate juggling with the choke lever when cold, but is first touch when the engine is warm. 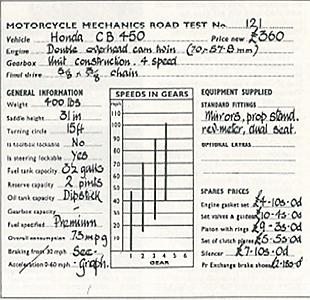 The only real black mark the new Honda earned from our testers was for the suspension. Both front and rear units were alarmingly soft and gave the impression of riding a giant elastic band, especially on the twisty, bumpy club circuit at Brands Hatch where we carried out initial tests.

The headlamp, too, was strangely unimpressive, especially for a well-planned 12-volt system such as the Honda's, with a fuzzy, ill-defined beam. The rest of the electrics, which include a neutral and main beam indicator, were first rate.

Only other point on which the Honda could be faulted was the rather harsh vibration in the middle rev range. Once the meter rose over 6,000rpm, however, it suddenly became as smooth as butter and power really started to pour in. Ideal long run cruising speed is 80mph, when it's as smooth as a Rolls-Royce.

Below 4,000rpm, however, the motor starts to snatch and power is nonexistent.

This lack of power low down means that it is quite impossible to use top gear inside the built up areas, but this is to be expected from a "double-knocker" motor, which will happily buzz up to 10,000 rpm.

Technically, the motor is full of innovations. The most celebrated of these is the torsion bar valve springing which has been heavily publicised mainly because of its novelty. An ordinary spring, it should be remembered, is also a torsion bar coiled helically to occupy less space. The sole advantage of the bar is that it has less tendency to cause valve float at very high rpm.

One enormously long chain drives both overhead cams direct from the centre of the camshaft— with no less than seven guide and jockey wheels, made of synthetic rubber, to keep it in order.

180 degree throw
Another innovation is the 180 degree throw crankshaft assembly — which is a complete, factory assembled unit Nearly every other parallel twin made has pistons that go up and down together; the Honda's move alternately, and this is one reason for the incredible smoothness high up the rev range.

Down in the combustion department, the Honda is again novel, with the use of cast iron "skulls" set in the hemispheres of the alloy head. Compression ratio at 8.5 :1 is lower than one might have expected, but it is still sufficient to produce a claimed 43bhp at 8,500rpm.

To sum up — the new CB450 is a wonderful and welcome addition to the big bike range on the British market But in all round performance it is only equal to a well turned out sporting 500 — and the cost of spares is enough to make anyone think carefully.