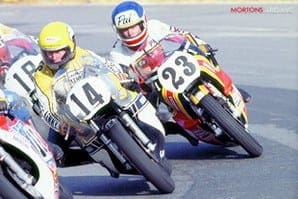 Few motorcycles had such a dramatic impact on road racing in the 1970s as Yamaha’s TZ750. While Yamaha had been successfully providing 250cc and 350cc machines for club and international racers alike since the mid-60s, the TZ750 burst on the scene in 1974 and changed everything, becoming the machine of choice for any rider keen to make an impact on the increasingly popular 750cc class.

The four-cylinder two-stroke provided easy access to the level of power, which at the time was only available to factory-supported racers in the Formula 750 class, a category that had been growing since the success of inaugural races such as the Daytona and Imola 200 milers.

Formula 750 had originally been devised to promote superbikes such as the BSA and Triumph 750 triples, Honda’s CB750, Suzuki’s GT750 and Kawasaki’s 750 H2.

The most potent of these, the two-stroke three-cylinder Kawasaki, churned out 74bhp. Kawasaki’s bigger 903cc Z1, which was ineligible for F750, turned out 82bhp which when it was launched in 1972 stunned the motorcycling world. 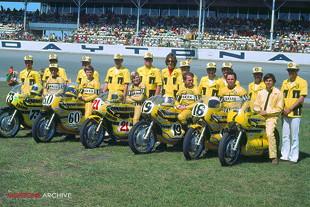 Yet there was I, a rookie tester for the weekly paper Motor Cycle, being let loose on the first TZ750 to be brought into Britain. Rumours of its fierce potential had been circulating since the first examples had appeared in the US eight weeks earlier at the end of 1973. Essentially its engine was two TZ350 twins on a common crankcase developing a claimed 90bhp in a production racer that weighed 322lb dry. It was the most powerful production motorcycle that had ever been offered for sale.

The scene of my date with destiny was Oulton Park where, at the end of February 1974, former works Yamaha rider and multi Isle of Man TT winner Chas Mortimer was testing the bike for the first time after it had been imported by his sponsor Danny Keaney. The TZ750 had been brought from Liverpool docks a couple of days earlier and still had packing case dust scattered all over it.

The story of how we came to be about to test a bike that would two weeks later provide Italian multi world champion Giacomo Agostini with his first Daytona 200 win in a Yamaha one-two-three and dominate the road racing world for the next decade is a bit roundabout.

In 1973 Yamaha didn’t have a suitable model it could adapt for Formula 750 racing, for which the American Motorcycle Association (AMA) required that 200 examples be homologated before the beginning of the season. Its only current big production bike was the heavy TX750 twin tourer. Two years earlier however the factory had revealed its GL750 four-cylinder 750cc prototype in Japan, production plans for which were shelved when fuel prices rocketed after the Yom Kippur war in the Middle East. 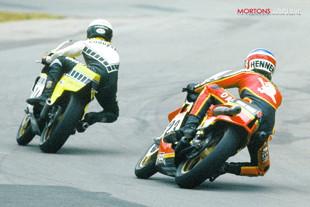 Racing was another matter though. Although Yamaha’s TZ350 twin had won Daytona in 1973 in the hands of the Flying Finn Jarno Saarinen (who was tragically killed at Imola just months later), the factory needed something along the lines of its successful works 500cc fours. Soon after, Kel Carruthers, the former world 250cc champion who masterminded the rise to fame of Kenny Roberts, tested a prototype 750 four, codenamed YZ648/OW19, in the US. He apparently liked the bike but was unimpressed by its high-speed stability and called for chassis changes.

It was just three months before the end of 1973 (in October) that Yamaha’s engineer Naito and designer Matsui were given the go-ahead to develop the machine. When the machine was revealed at the 1973 Tokyo show, the racing world was stunned. The TZ750 had no connections with any road bike that Yamaha made, yet it was AMA-legal and by December the requisite 200 examples had been homologated. The price tag in the US was less than $4,000.

Close scrutiny of Chas Mortimer’s machine revealed that its engine did indeed use two water-cooled twin-cylinder blocks on the common crankcases. In the spares kit were two built-up 180-degree crankshafts showing that they were separate with central gears driving another double-width gear on a countershaft, which connected with the clutch gear on the right and through another pair of gears rotated the water pump and Hitachi ignition unit on the left side and the clutch gear on the right. Spiral gears from the countershaft drove a gear pump in the sump to force lubricate the six-speed gearbox. A user-friendly touch was that the gear-change shaft projected out of each side of the cases, so that linkages were unnecessary to switch sides.

It wasn’t a 750 though. With the same 64 x 54mm internal dimensions as the 350 twins, the capacity came out at 694cc and the factory designation was in fact TZ700A. But there were other differences from the twins. 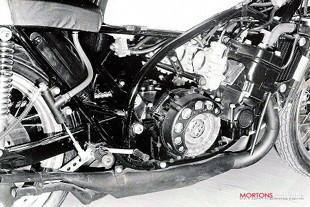 The crankcase drive arrangement meant that the crankshafts rotated backwards, so that the piston thrust was on the exhaust port side of the cylinder bore. Also unlike the TZ350 twins, the TZ750 used reed-valves in the intake ports fed by a bank of four Mikuni 34mm carburettors, while the exhaust port timing was shortened to widen the power band. Four exhaust pipes were crammed into the fairing, their profiles altered from conventional expansion chamber practice to get them to fit without impeding cornering clearance.

All this was mounted in a duplex tubular steel frame similar to the 350cc racers with tubes running from the steering head to the swingarm pivot. Two more tubes swept under the engine to connect with a conventional pair of vertically mounted spring-damper units. Brakes were almost identical to those used on Yamaha’s big road bikes with twin 11.75in discs gripped by twin opposed-piston calipers. Wheel sizes were conventional 18-inchers with Dunlop Racing tyres (KR84 front and the latest KR97 200 rear) on light alloy rims.

A bigger version of Yamaha’s signature racing tank and seat slotted onto the frame, which was wrapped in sleek white and red fairing. I could hardly wait to jump aboard.

But first, Chas Mortimer gave the bike a check over, topped it up with petroil mixture and coolant, and fired it up easily with a quick bump start. The clatter from the exhaust system filled the pit lane as the engine temperature gauge rose to 80°C and Chas took it out onto the track.

He came in after a lap, the trials-type chain tensioner chattering over the bike’s discordant racket. The plugs were oiling up with an over-rich mixture.

'Christ, it’s so quick,” said Chas. “It came onto four over the back and things really happen when you open the throttle. It’s incredible!'

“Christ, it’s so quick,” said Chas. “It came onto four over the back and things really happen when you open the throttle. It’s incredible.” That was just what I needed. Here was a seasoned and experienced world class race winner raving about the bike’s performance, even when it was running rough, pulling to the left and the tyre pressures needed raising. Appropriate spark plugs were fitted and the steering damper removed. 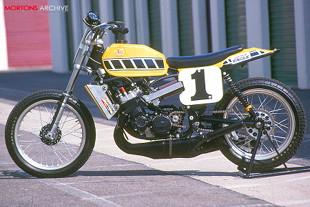 It was my turn. Chas’ comments were still ringing in my ears as I sank into the seat. “I’m used to fast bikes but this is ridiculous,” he said. “You have to be careful only to put the power down on the straight.”

Sinking into the seat I was surprised that it didn’t feel much bigger than the 350, apart from the wider fuel tank. Easing it out onto the track, it pulled away like a road bike and could be flicked about with confidence. Above all it was, dare I say, almost comfortable with plenty of room to tuck in behind the fairing bubble.

If it hadn’t been for the cacophony of the unsilenced pipes, below 8000rpm the engine was as docile and as flexible as any roadster, the reed valves enabling it to pull cleanly from below 4000rpm. Added to this, the steering was light and the controls silky, even the twistgrip with four cables to the carbs.

'But, as I said at the time, if ever there was a Jekyll and Hyde motorcycle, this was it. Opening up beyond 8000rpm, as Chas had warned, the engine hit its power band and the front wheel lifted, forcing me to grip the tank and hang on as if I was on some out-of-control roller coaster…'

But, as I said at the time, if ever there was a Jekyll and Hyde motorcycle, this was it. Opening up beyond 8000rpm, as Chas had warned, the engine hit its power band and the front wheel lifted, forcing me to grip the tank and hang on as if I was on some out-of-control roller coaster, desperately trying to get more weight over the front end.

On a TZ350 the sudden and intoxicating rush of power could at least be kept under control simply because it was much lighter, but the big four was in another league with corners rushing up and looking increasingly narrow at frightening speeds. The engine’s smoothness cloaked its evil intentions too, beguiling you into the feeling it could be tamed.

Fortunately the huge brakes, though based on 650 roadster units with gripper pads, were more than ample for the four’s 366lb tanked-up weight. As confidence built up I then had the sobering realisation that I’d been using only the four lower ratios of the six-speed gearbox. Fourth was good for more than 140mph at 10,000rpm and there were still two more ratios to use on the Daytona gearing that equated to 170mph in top.

Yamaha was being cautious about the TZ750’s power it seems. Could the factory’s claim of 90bhp, which equated to two 45bhp 350cc twins (not far from the 39bhp air-cooled RD350 roadsters of the time) be on the low side? To find out, another of the production TZ750s was run on a rolling road at a Dutch testing station. The result measured at the back wheel was 97bhp at 10,400rpm. 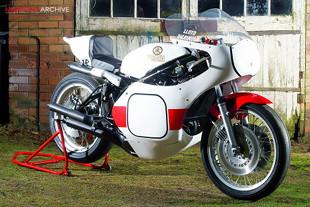 For Chas Mortimer, that TZ750 proved to be a money spinner, even though the Formula 750 class had yet to be officially ratified by the FIM for another year. For about £4000 he had a race ready machine with spares to last most of a season including two spare cylinder blocks, two crankshafts, six pistons, clutch plates, carb spares, sprockets and even a modest tool kit.

“That bike made me a lot of money,” he recalled. “It was ideal for the European circuits because it was so easy to ride. Others thought it difficult, but I was lucky with the handling. I even won on the twisty road circuit at Macau. I was chasing works rider Hideo Kanaya who crashed into a slower rider while he was leading. I bought another TZ750 for the next season but I hated it. It wasn’t the same bike.” He retired from racing in 1980 after being knocked off and breaking his pelvis at the August Bank Holiday meeting at Oulton Park.

Yamaha developed the production four into a full 747cc racer through the 1970s alongside its OW works machines, utterly dominating the Formula 750 class both sides of the Atlantic for a decade.

Around 550 examples of the TZ750 four were made by Yamaha along with a number of engines that were also used for sidecar racing. An obsolete racing bike in the 1980s (as in earlier years) very quickly became either cannibalized or left to rot. So there are few left and even fewer in original condition. One rarity is the monoshock TZ750E owned by Lincolnshire classic racing fan Lloyd Dickinson. Until it was fired up at the recent Telford classic off-road and racing show, it had never been run. It is so valuable it will never be raced, says Lloyd.

So any TZ750 is a worthy bearer of the ‘classic’ title, because it generated fear and fame in equal measure for so many years, and still does.