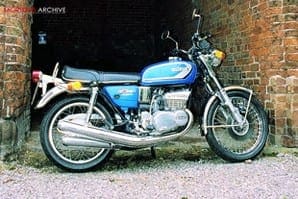 Kawasaki and Yamaha’s contribution to global pollution levels is well known but it’s worth remembering that Suzuki was actually the last of the Japanese giants to abandon the two stroke.

Honda showed uncanny foresight by not bothering with ring-dingers in the first place of course, but Yamaha had been producing the XS-series 650cc parallel twins since the late 1960s. Even Kawasaki had embraced valves and camshafts from 1972 with the Z1 (not forgetting their previous BSA A10 copy, the W650 of course).

Suzuki, on the other hand, sat back and watched the world disappear in a haze until 1977, when the GS range was finally unveiled.

During the previous half decade the GT two stroke triples had been the mainstay of their medium and large road bike range. Available in nominal 380cc, 550cc and 750cc sizes, they were always seen as a soft option to Kawasaki’s 'Green Meanies'.

While the GT750 Kettle, aka the 'Water Buffalo', is fondly remembered, the GT550 had a particularly low profile and now tends either to be completely forgotten or confused with a later Kawasaki that happens to have the same model designation. Meanwhile, GT380 junior is beginning to be appreciated it seems.

Suzuki’s triple used the same square 54 x 54mm bore and stroke as the twin, for instance, giving an actual capacity of 371cc. An optimist might expect the resultant engine to produce two and a half times the 250’s power output, giving about 45 bhp.

24mm Mikunis
Sadly, it doesn’t quite work like that. For one thing, the triple used 24mm Mikunis rather than the twin’s 26mm (or 28mm on later bikes) carbs, partly explaining the more modest claim of 38 bhp at 7500 rpm. To put that into perspective, the S3 Kawasaki offered 42 bhp from 400cc, while the Honda CB350 (actually 325cc) mustered 36 bhp.

One thing the GT380 never lacked was weight – at around 380 lb, it wasn’t that much lighter than a Triumph Bonneville. And if you want to make an even more odorous comparison, the latest 150 bhp Yamaha R1 weighs almost the same.

Road testers were always keen to mock the 380’s podginess, yet by mid-Seventies standards it wasn’t particularly gross. The problem here was really mostly psychological – as is usual with people who work for motorcycle magazines!

Partly because of the big Ram Air shrouds over the cylinder head, partly because it had 33% more silencers than strictly necessary, the smallest Suzuki triple looked a bit ungainly. In reality, those allegedly lean, green and mean Kawasaki triples were hardly any lighter and almost identical in wheelbase.

Even now it does tend to look like something from another planet. The convoluted 3-into-4 exhaust remains an object of wonder. For technical reasons, a 3-into-1 pipe just won’t work on a two stroke triple, but surely there was no need to share the centre cylinder’s output between two underslung silencers?

Then there’s the (in)famous Ram Air cowling to consider. Cooling the centre pot of an in-line triple will always be a trial, so it’s just possible that scooping the breeze into the cylinder head area is a good idea. On the other hand, you might imagine that at low speed, putting a lid on the top end would actually make the engine run hotter. The main advantage was probably to reduce noise, while from a practical point of view the spark plugs were definitely more difficult to remove.

The true worth of Ram Air was perhaps illustrated when Suzuki dropped it from later GT250s when they made the engine more powerful, which, paradoxically, would have made cooling more critical…

Behind the marketing excesses lay a fairly basic, mildly-tuned two stroke engine. That may partly explain why the test GT380L started immediately and soon settled to an even tickover with no juggling of the enrichment lever. Unlike on the 250, the kickstart is on the right and is easy to use despite its awkward folding action.

So, with a nose crammed full of nostalgic fumes, I tapped into first (an action confirmed on post-L models by the celebrated Digital Gear Position Indicator)  and burbled off into the countryside. The riding position is very comfortable, thanks to a pair of handlebars that are raised slightly without straying into cow-horn territory.

Plenty of seat padding too, and the suspension coped well with rural potholes at low speed. Unsurprisingly, the gearchange action felt like the 250’s; delightfully slick and light and far better than most modern ‘boxes which have to transmit so much torque.

It soon became apparent that the 380 was not over-endowed with the latter attribute. Although the engine happily breezed along at low revs at constant speed, opening the throttle produced very little in the way of acceleration.

Crisp crackle
Once past 5000 rpm the engine perks up and makes a crisp crackle. While it’s not as jangly and distinctive as a Kawasaki triple, the tone is similar. At the same time, the vibration that appears in the footrests in the mid-range disappears so the 380 is a smooth cruiser at motorway speeds. Rubber mounting is the secret here: in-line threes are good for primary and secondary balance but they have a fierce rocking vibration as revs increase.

Apart from the dubious advantage of Ram Air, the engine featured something called ‘Suzuki Recycled Injection System’, which was supposed to stop unburnt petroil collecting in the crankcases.

As I remember all too well from my mis-spent youth (when a friend owned a GT380 and I had a Honda CB250G5), what SRIS really did was hoard all the oil during slow-speed interludes. Then, first time it was given a burst of revs out of town, the most almighty cloud of smoke would billow out for a minute or two. My Honda was a lot slower than the Suzuki and it was about five miles ahead before I could see where I was going!

Two stroke oils have improved tremendously since then, so this is not quite as embarrassing now. Relatively speaking, petrol is a bit cheaper too, but a consumption figure of about 35 mpg is nothing to be proud of, considering the limited performance.

Evaluated in classic terms, none of this matters much. Out on the 2002 road, the bike felt stable and secure at normal speeds. The tall 19-inch front wheel and laid-back steering geometry virtually guarantee slow responses but I can’t see how 38 bhp is going to overpower the sturdy-looking double-cradle frame. As discerning readers of this magazine will appreciate, a bike with handling limits within sight of legal speed limits can be more fun to ride. I like two strokes but by the time the GT380B was de-listed in 1979, priced at £795, it was beginning to look like a dinosaur.