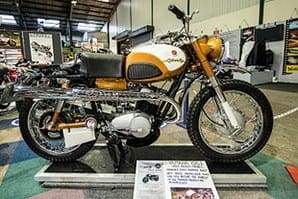 The best in show winner was an extremely rare 1959 Yamaha YDS1 1959 Ranch Model. The 'bike' was bought as an incomplete pile of bits six years ago and was finished just before the show. Yamaha described the Ranch Model in its sales literature as 'Specially built and designed for terrain and cross-country areas or for slow, tedious duties.' We're not sure about that, but it is utterly exquisite and a credit to owner Mark Cowdery. 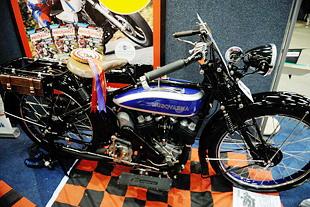 Rodney carried out a full restoration between 2002-04. The frame, V-twin engine and gearbox are Husqvarna's own manufacture. Husqvarna is one of the oldest motorcycle manufacturers, as it started making motorcycles in 1903.

This bike was brought to England around 1970 but never used. It was taken in part exchange for a Rover machine wanted by a Swedish enthusiast. It was advertised for sale in 2000 and I was the first person to respond, and luckily a deal was done. The machine was virtually complete and in good condition and all tinware was sound, but the bike needed a full restoration.

The trophies will be presented to the owners in the Main Hall at 4pm by our guest of honour, track legend Christian Sarron.