With the launch of its massive six-cylinder Z1300 in 1979, Kawasaki triumphed in showing how Japanese design ingenuity alone could never succeed in overcoming the dynamic necessities of a motorcycle.

The late, great Vic Willoughby, technical editor of Motor Cycle, said it best in his description of the factory’s biggest bike of the 20th century: “Kawasaki achieved the incongruous distinction in sacrificing a sophisticated and wholly admirable engine to an overall concept totally alien to the very essence of a motorcycle, as least as understood in Europe.

“Some 700lb of material for the standard model could better have made two light, lithe and much less thirsty single trackers.”

No doubt. But perhaps the Z1300 was before its time. Well before its time. Nowadays, of those who still own examples of the six-cylinder monster more than a quarter love it for what it is: a lavish example of excessive engineering framed in a conventional motorcycle format.

Now, however, we have the choice. Bike design has evolved in every direction: slim, light, flashy, garish, whatever we want. And indeed we do now enjoy machines with much more power weighing almost half as much as the six. 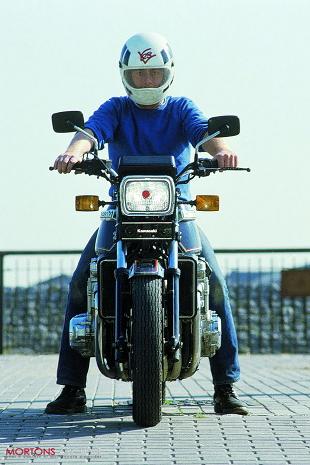 Back in 1979 the Z1300 was the pinnacle of power. With 120bhp on tap it usurped the 105bhp of Honda’s CBX six, launched a year earlier, but at a price. If you wanted the power you had to suffer the consequences of even more weight and unwieldiness. It would be another five years before the GPz900R arrived with a more manageable balance of handling and performance.

And yet I have to say that back in 1979 I got a buzz out of riding the Z1300 test bike supplied to Which Bike? magazine. Its awesome presence would have been enough.

But the six handled better than a bike weighing 653lb had a right to. At high speeds – 90-100mph on just a whiff of throttle – on motorways it would sit with the supreme confidence and stability of a Jumbo jet.

It also had a sting in the tail. The Z1300 could accelerate so hard and wilfully that you could easily find yourself in over your head. Beam past a string of cars on a less than smooth road and suddenly you could find the suspension overloaded as the whole plot would wobble and shake on swoopy curves.

At least the Honda CBX looked as if it might be fast and furious and not a little demanding. The Kawasaki was, and probably still is, seductive and beguiling. Push it to the edge of the envelope and the consequences would be nasty. It was an electric chair in Conran covers.

It happened to me in the most embarrassing of ways. Once in London I was parking the Z1300 on an awkward camber. I placed a steadying boot on road that wasn’t there and ended up in a heap with the bike on its side like a beached whale. And I couldn’t raise it alone. Now that’s sad.

Unfaired motorcycle
What makes the Z1300 so appealing now is that it takes the conventional unfaired motorcycle of the 70s to its extreme. Everything is where you normally expect it to be: the engine, exhaust system, frame, fuel tank, wheels and brakes, all are much like any smaller Japanese bike. With the Z1300 there was just more of it.

As such the six was a caricature of a motorcycle. And one that despite the efforts of the designers to build in a host of clever features fell short on the fundamentals.

For example, the original Z1300 I tested in 1979 had suspension soft enough to make it squat under the power of the otherwise satisfactorily potent disc brakes. And it wasn’t the overall width of the engine that was a problem, more that the designers had been unable to reduce width across the footrests because of the need to accommodate the drive shaft, a problem that also showed up on the Z1000ST. Because of this the footrests were too high (13.5in from the ground unladen) and too wide (25.5in tip to tip) so for any rider over 5ft 6in the riding position was too cramped for comfort over long distances. 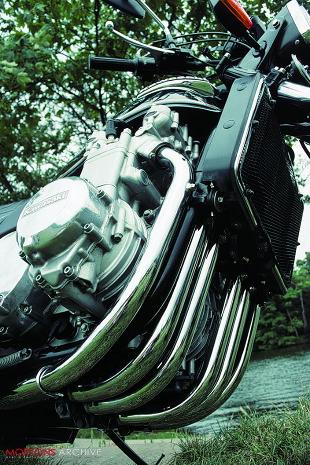 By the middle of 1980 I’d obviously forgotten this and many other deficiencies, because in a moment of weakness when musing about the need for a long-term test machine with the legs for high-speed touring I phoned Kawasaki UK and suggested the Z1300. Clearly they needed to promote the bike and jumped at the opportunity.

So a few weeks later in June we took delivery of a run-in Z1300-A2 with 616 miles on the clock. On a trip from London to Nottingham and Scunthorpe it was immediately obvious that some design changes had been made and not all to the benefit of the handling. At the rear the lower shock mounts has been modified to prevent them coming adrift and the springs had been stiffened, improving cornering clearance and reducing the grounding suffered on the original A1 model.

Inexplicably the front fork sliders had also been revised with single clamp bolts for the wheel spindle rather than two, and while this didn’t matter much during high speed cruising meant that the steering was soggier, calling for an inordinate amount of effort in twisty bends that I hadn’t recalled from the original test bike.

But was it quick! Zipping along the arrow-straight Ermine Street two-up at 120mph was a breeze. (We weren’t able to performance test at MIRA because the facilities were unavailable to us at the time, but 135-140mph flat out looked reasonable.)

Despite the use of a bigger sump with additional baffles problems continued. Kawasaki saw fit to put a sticker on the tank top warning owners to check the oil with the bike on the centre stand, and although the level was correct the pressure-warning lamp would occasionally flicker, the result of an electrical fault.

Poor response
With so much power on tap, you’d expect the engine lively to the twistgrip. In fact it was peaky, with poor response from below 2000rpm. And that was, apart from the bike’s weight, probably why its fuel consumption was poor. Most time I’d top up the tank at 170 miles when it would take five gallons, for a consumption of around 33-34mpg.

At least our bike was reliable (some weren't). Our managing director took it on a tour around the continent that lifted the mileage to 5000 without any trouble. Soon after I clocked 640 miles in a weekend trip to Northumberland and back, but this time with the cruising speeds pegged to 80-85mph, and consumption improved to 38-40mpg, but still more I’d regard as satisfactory.

Contributor Tim Stevens, who had been working at Hesketh, faired better on another continental trip, averaging 44mpg, but he criticised the gear ratios. While top gear gave 4150rpm at 70mph with plenty in reserve, bottom gear was too high, which made riding in traffic a chore, particularly because engine braking was high on a closed throttle leading to unnecessary jerky progress. 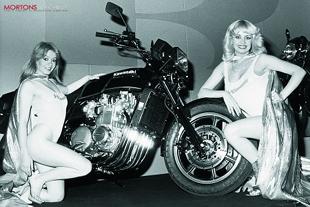 My biggest beef with the Z1300 was its high running costs. Fuel and tyres (two rears in 5500 miles) were expensive, not to mention insurance (£393 a year for a 22-24-year-old in London at the time), but the biggest cost was depreciation. Lack of demand for the Z1300 had dented residual values to the point where an owner would lose up to £1200 in a year, more than the running costs.

We got a lot of flack about that from Kawasaki UK, which had probably expected a eulogy, but it quantified our collective feelings about the bike.

Nearly three decades on it’s of little consequence. The Z1300 was the zenith of a period of Japanese motorcycle design that was leading up a cul-de-sac. In the 21st century similar extremes of absurdity are offered by massive custom bikes. But now you at least have a choice in avoiding them.