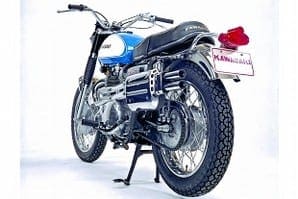 In all honesty there are probably enough claims and counter claims behind the models in their various guises to keep a team of modern lawyers in work for a generation.

Kawasaki assimilated Meguro around 1960 when the latter fell into financial difficulties. However, to muddy the waters Meguro had previously made a parallel twin called the Senior, which may or may not have been an analogue of one or more British machines including the A7/A10. At some point, prior to the acquisition by Kawasaki, Meguro built what was very obviously a 650 twin with more than a hint of an Armoury Road about it; there are even suggestions that the BSA group may have licensed the rights of the A7 to Meguro. With Kawasaki in charge the ante was upped and the bike exported, with limited success, with an obvious priority stateside where British iron was in favour.

Despite severe finger waving and the usual name calling over cheap Japanese imitations, it was obvious to anyone but the casual observer that the bike was anything but a direct ‘me-too’ rip off. The A10 was a long-stroke motor (70mm x 84mm = 646cc), compared to the W-series engines which were just over-square in architecture (74mm x 72.6mm = 624cc).

The resultant Japanese unit benefited from lower piston speeds, better combustion, lower pumping rates in the crankcases and hence less propensity to leak oil. The difference in Kawasaki’s capacity was more than compensated by its ability to rev thereby delivering more power. Larger gasket faces, superior electrics, cutting edge metallurgy and other refinements allowed the W marque to be a commercially viable entity for longer than it had any right to be.

The bike soldiered on in Japan until 1975 when it was already eclipsed by the Z1 and Z2. The company’s own Z/KZ750 twin was only a year away and there was little perceived need to keep the old running alongside the new. Strangely there are more than a handful of these bikes on the classic scene and the remarkable similarities and obvious differences to their obvious British stimuli always make them a focal point at any event. Over the bikes’ life cycle the large parallel twin’s popularity peaked then declined and it’s only in the last few years that the engine configuration has come back into vogue. The new W-series (650 and 800) play strongly to the looks and style of the earlier models and we reckon that’s no bad thing.