By 1967 Honda’s, by now almost legendary, CB72 could trace its ancestry back a decade. Although a phenomenal machine, its profit margins are believed to have been low. Honda decided to produce a more conventional, and therefore cost effective, machine that was less over-engineered and without some of the CB72’s design foibles. Importantly, the company also elected to run five-speed gearboxes; an omission on the outgoing model that had served to compromise flexibility and rideablility.

The bikes were ground-up designs and shared little with the previous model. A full cradle tubular steel chassis replaced the spine frame, the engine moved to an over square bore and stroke architecture in search for more revs and the styling morphed into a trendy 60s two-tone paint in candy and white. The CB250 was aimed at the younger rider and the slightly stuffy old world, yet blatantly, oriental styling that had singled the CB72 out as radical in 1960 was ousted for an altogether more modern look. Visually more airy, the clever use of the paint schemes captured the buyer’s eye straight through the showroom window with white side panels complementing the lower half of the tank and the headlamp.

At its launch the CB250 was very much the four-stroke benchmark in terms of performance, reliability and kudos; it also had a gloriously addictive exhaust note. Often overshadowed at the time by its bigger brother, the CB350, the quarter-litre twin was almost a byword for Japanese engineering ability. Over a decade the bike went through a series of revisions as Honda’s front line learner bike and was sadly, but inevitably, marginalised by the more powerful and reliable two-strokes. That said it was, and remains, a great machine and the K-series could well have inspired the phrase 'You meet the nicest people on a Honda'.

The Ks – CB250 (1968)
Latterly (and wrongly) entitled the K or K0 the bike runs a relatively boxy two-tone tank in either candy red or sardine blue on the upper portion with cream/white lowers, side panels and headlamp shell. The seat is a flat basic design with simple piping to the side and cover devoid of any ribs or welts. Mudguarding is a little old fashioned with quite deep valances; the front forks feature rubber gaiters. 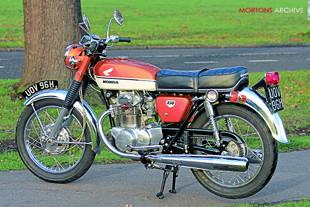 Little verifiable evidence seems to exist for the K1 variant and many see this derivative as little more than a model year stop-gap until the introduction of the K2. Rubber fork gaiters are replaced by steel covers finished to match the candy paintwork of the petrol tank. The seat of the K1 features distinctive ribbing for the first time and there are some engine and trim revisions.

CB250 K2 (1970)
UK models all delivered with candy gold replacing previous blue or red options with side panels still in white/cream. The headlamp shell of the K2 is now in black (to cut down on parts variation at the factory). The tank now features a candy gold line within the lower white/cream section. Both mudguards now have minimal valancing; the rear unit sports a rubber mudflap and a horizontal support stay. Once again minor year-on-year engine upgrades.

CB250 K3 (1971-72)
Visually, the K3 appears to be very different from the previous models, with a rounded tank, a wide black flash and one white pinstripe. The tank also features a chrome strip on its lower edge and has a Monza type filler cap. The seat is much deeper with a flowing chrome side-strip that swoops above the shock mounts and large rectangular seat strap buckles. The side panels are more rounded and feature bifurcated louvres to the front edges. All panels are finished in candy gold.

CB250 K4 (1973-74)
This is probably perceived as the definitive K-series 250. The paint scheme is similar to the K3 in candy gold with three white pinstripes within the black flash. The seat piping of the K4 is much lower in the rider’s section of the seat and the side panel badges on the K4 are significantly more prominent than on previous models. 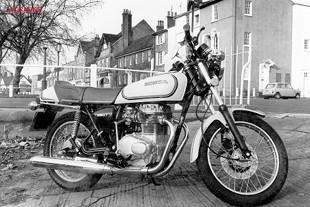 The final years – CB250 G5 (1975-76)
A serious makeover totally enlivens the appearance with angled silencers, new colour schemes and graphics. The front end is very similar to the CB400/4 and the forks are now exposed. The gearbox receives a sixth cog which is very much an overdrive.

CJ250T (1976-77)
The bike runs plain colour schemes in yellow or red with panelling and tail-piece that mimics the CB750 F1. The starter motor is deleted and exhaust is a two-into-one unit on the right of the bike.