This month’s magazine is simply stuffed full of old motorcycles, a veritable bevvy of Britbikes plus an odd Italian for added entertainment. Just £2.50 on subscription, or here’s how to buy a single issue…

AJS Model 31 CSR
When Lawrence Howes took on the renovation of an AJS 650 twin he was sure that the engine didn’t need much attention, it would be a quick project to complete, and he was bound to make a profit. Thus began a decade of enduring love against all odds

BSA A65 upgrades
Some say the final BSA 650 might be the best-ever British twin. This is because the design incorporated both a short stroke for high revs and a big valve area for more power. But this smooth-looking engine needs sorting to make a truly great useable classic. Derek Pickard does all the work and gives all the details

Matchless G80 rebuild
This month, Frank’s continuing quest to build a late AMC 500 single moves onto the clutch. Is he a real man, clutching at straws, or is there a complicated joke about straw men in here somewhere?

Moto Guzzi Nuovo Falcone
In the UK, when we go for an acclimatisation ride on an unfamiliar old bike, it’s probably a Sunday afternoon bimble to the pub and back. In Canada, Nick Adams does things rather differently. He wanted to get to know his Guzzi 500 single, and the wilderness was calling

Norton Commando rebuild, pt4
Some restoration projects should carry a health / wealth warning, as Stuart Urquhart discovered the hard way. His Mk2 Interstate is finally finished. So what’s it like to ride? And was it worth all the effort and the not inconsiderable cost?

Norton Model 18
Peter Winter’s father bought the bike in 1941, and it’s been in the family ever since. Last month he told us all about the bike’s interesting history. Now Frank Westworth takes it for a turn and experiences the delight of a rigid / girder-forked prewar single

Royal Enfield / Rickman Métisse
Combine the very last, very best of Royal Enfield’s beefy 750 Interceptor twins with a race-bred Rickman chassis modded for the road and what do you get? Nolan Woodbury reveals all

1926 Triumph Model P
Triumph’s bargain-basement sidevalve single of the mid-1920s was not the best advertisement for the marque’s aspirations towards engineering excellence. It did mark, as Rowena Hoseason discovers, something of a turning point in the firm’s fortunes

Triumph T150 rebuild, pt4
The UK-spec T150 is gradually being transformed into something with rather more mid-western styling. At last, this project is complete and ready to return to the road

Triumph Sprint Special
Some specials are accused of being all show and no go. Not this one. Intended to be ridden hard and fast on sprint circuits, this pre-unit Triumph twin has been taken out to 820cc and runs on methanol…

PLUS! Graham Ham’s ShedQuest visits a veritable wizard in the workshop, the proud owner of some stunning vintage V-twins; PUB tries to hibernate but doesn’t quite succeed; Dave Minton remembers riding a motorcycle through a tree trunk; and RC readers rattle on about the Triumph Phoenix prototype, big end bolt stretch, Commando clutches, Wulf engines, stippling techniques and a clattery Ducati. Plus there’s news, events info, small ads and more.

Or read it on your desktop: subscribe to the digital version of RealClassic – now available for iPad, Android and an assortment of other electronic devices… 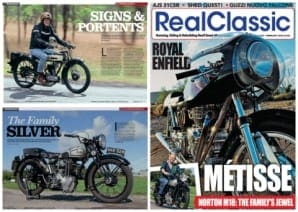