Aerodynamics help turn a flat twin into a tourer that can boldly go where no Scoop has been before: BMW’s R100 RS. 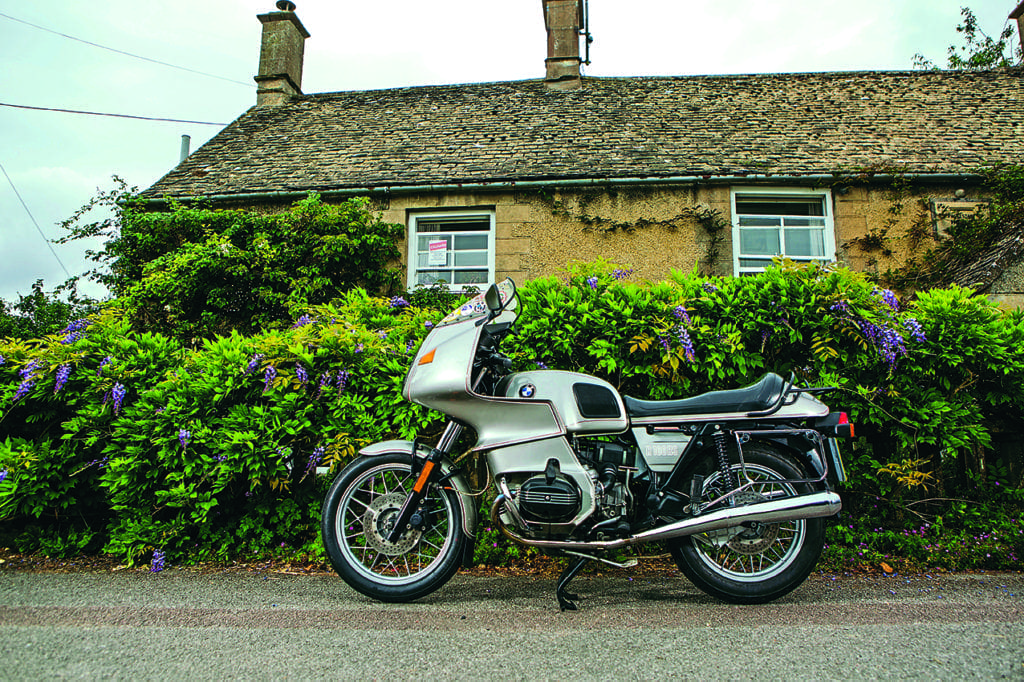 We’re outside drinking at the local, when two BMWs pull up. This is a rare event due to their cost and the rampant inflation of the period. Even rarer are the riders who are both only mid to late 20s but there’s a twist here; both bikes are the latest R90 S models. These are BMW’s new flagships and ostensibly unlike any Beemer before them. Built with sports bikini fairings and tricked out in factory smoked paint they appear to be the complete and utter antithesis of every boxer twin before them.

Fast forward to today and I finally get to ride a big boxer twin. 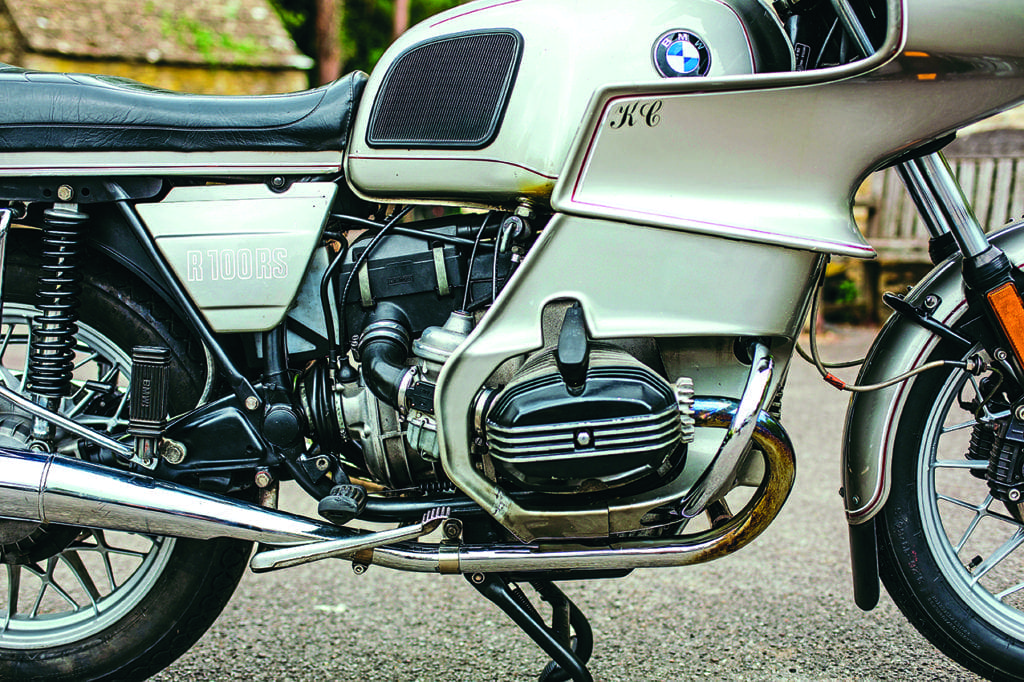 Our test bike has been provided by Karl Chadwick who has something of a thing for BMWs. The big twin is unquestionably a beast of restrained beauty vaguely similar to the R90 S but with one hundred or so extra cubes, more plastic panelling, less flashy paint and a host of minor revisions that further enhance the big twin’s capabilities.

The most obvious facet to a touring Beemer is its fairing. Designed to aid mile munching it’s as much a thing of function as it is of form. Perhaps more form. When you look at the various profiles carefully and you can spot key design features. The nose cone-cum-headlight is moulded to send the air both up and down. Upward and the air hits a small but significant lip at the top of the screen, thereby passing above the rider’s head. Downwards and the air meets a pair of carefully profiled aerofoils that add a degree of down-force which will counteract any lift tendencies.

Yes, it’s that time again. The run up to Christmas can be an extremely stressful time finding ideal gifts for your nearest and dearest. So, we’ve made your life a hell of a lot easier with our exclusive Christmas Gift Guide! Check out some of these must-haves for classic bikers…

Up a little and backwards a tad the exposed fork stanchions are semi-sealed at their tops to avoid turbulence entering into the cockpit area. And below the aerofoils those horizontal cylinders and heads sit in carefully sculptured depressions specifically designed to encourage optimum cooling. This is no basic machine, there’s just so much technology going on there; every reasonable effort has been made to ensure the bike carves through the air effortlessly.

Elsewhere the bike is subtly minimalist or simply functional, depending on your view point. The seat may look spartan but knowing BMW’s fastidious R&D will doubtless be superbly comfortable. The vestigial side panels fill small gaps in the frame and partially hide the large battery necessary to turn over the big twin. BMW weren’t the first to use a tail piece but their own interpretation of the concept might just as well be a trademark it’s so instantly recognisable. Decent quality mudguards may not be not be every rider’s prime consideration but if you were planning on crossing countries and possibly continents then you’d have a special appreciation those the R100 RS has on offer: sleek, unobtrusive yet capacious they doubtless do exactly what they were designed for. 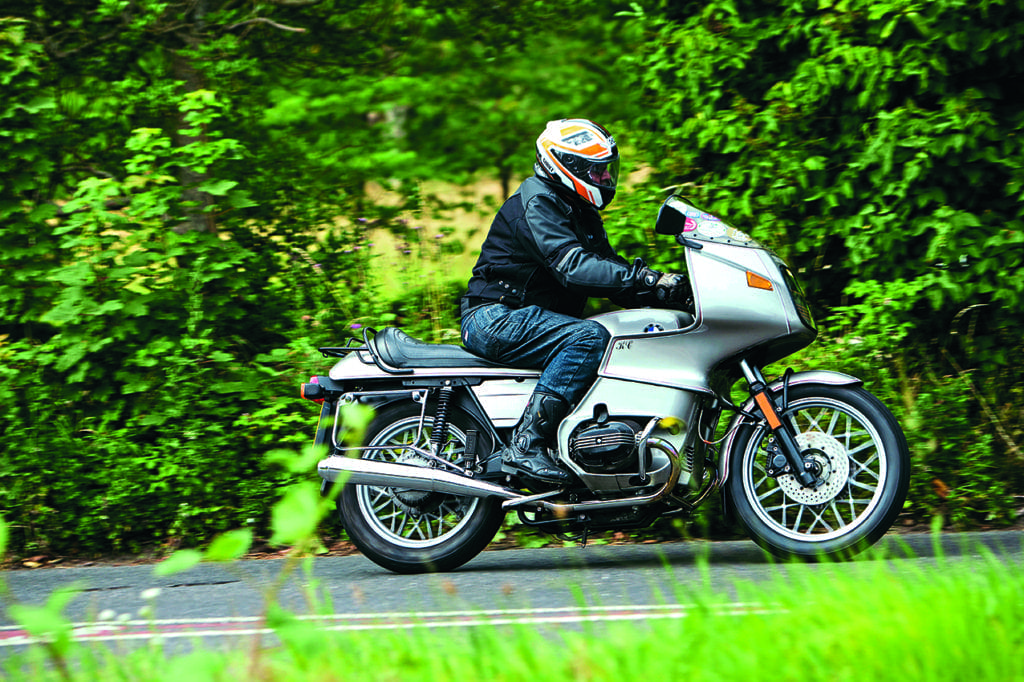 All fine and dandy but of course you’ll be wanting to know what it’s like to ride and the simplistic answer is ‘unlike anything from Japan’. From the moment you swing a leg over that saddle it’s a singularly unique experience that definitely takes some getting used to. Rather than having any pre-set expectations it is far better to let the big Beemer introduce itself to you. First off put the choke on; BMW has finally located it up on the left bar rather than hidden away on the side of the engine. Fuel taps on both sides turn on with a reassuring thwack as the levers locate into their proscribed registers. Our test bike also comes with the sideways operating kick-start lever but we’ll be giving that a miss at present thanks. Thumb the starter button and marvel as the big beast comes alive; if you want a classic motorcycle packed with positive character not the negatives excuses that supposedly pass for the same then you genuinely need to consider one of these. A blip of the throttle has the bike nodding momentarily to one side, but that’s what they all do sir!

The clutch doesn’t require a Herculean effort to pull it in and with a muffled whump we’re into gear and away. Big four-stroke twins are a unique experience but the flattened out version is something else altogether. The manner in which boxer engines make their power is far better experienced than described. Loping suggests the bike is somehow a laggard but it’s not. Deceptive might imply we’re in Honda VFR750 territory yet we aren’t. In essence the bike gets a mighty wiggle on and seems happy making progress at almost any speed in any gear. Okay, it’s not a rev-happy missile but then it’s not an old plodder either. It is quintessentially an air-cooled BMW flat twin. 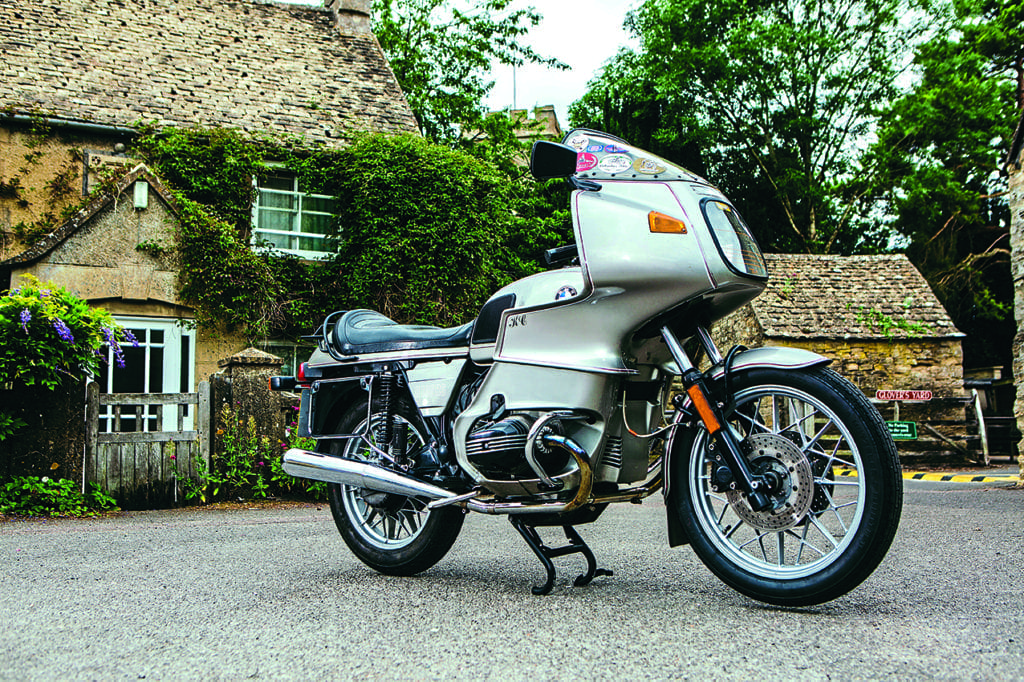 The low, almost flat bars make perfect sense despite looking potentially uncomfortable. The throttle is of the slow action, not exactly light, variety but it’s not heavy either. Beemers of this ilk are supposed to demonstrably exhibit a so-called climbing effect, whereby the drive to the crown wheel promotes a lifting effect. Sorry but this is techno hype for its own sake; you really have to search hard for the effect so beloved by barstool experts. In reality the oft-slated shaft drive proves to be a paragon of virtue and only betrays its presence if you try hard to provoke it or do something totally crass with the gear lever: speaking of which it’s one of the few mildly irksome facets of the bike. It’s easily located for downward changes yet I struggle when trying to tap it upwards. I’m sure a brief spanner session would sort that out easily. Unlike later Beemers this model has an indicator switch exactly where you’d expect it to be and it operates in the correct manner, for which I am truly grateful.

Boxer twins sometimes get a reputation for being awkward to get along with and I can see why a Jap-bike lover might take issue with both the engine layout and the design ethos. Yet with a more open mind you swiftly work around things such as the Bing carburettors and their angled inlet pipes getting in the way of your lower legs. Such minor inconveniences are easily offset by the huge syrupy slices of torque the engine dishes out and the easy going way in which you can cover stupidly large distances. Yes, I totally agree that both centre and side stands are less than ergonomically set up but if you’re using an R100 RS the way it was designed then you’ll only be rolling on and off one or the other once a day anyway. And that’s the secret to the bike – its build and ethos; it’s not a machine designed for a quick blast to the pub or a Sunday afternoon bimble. 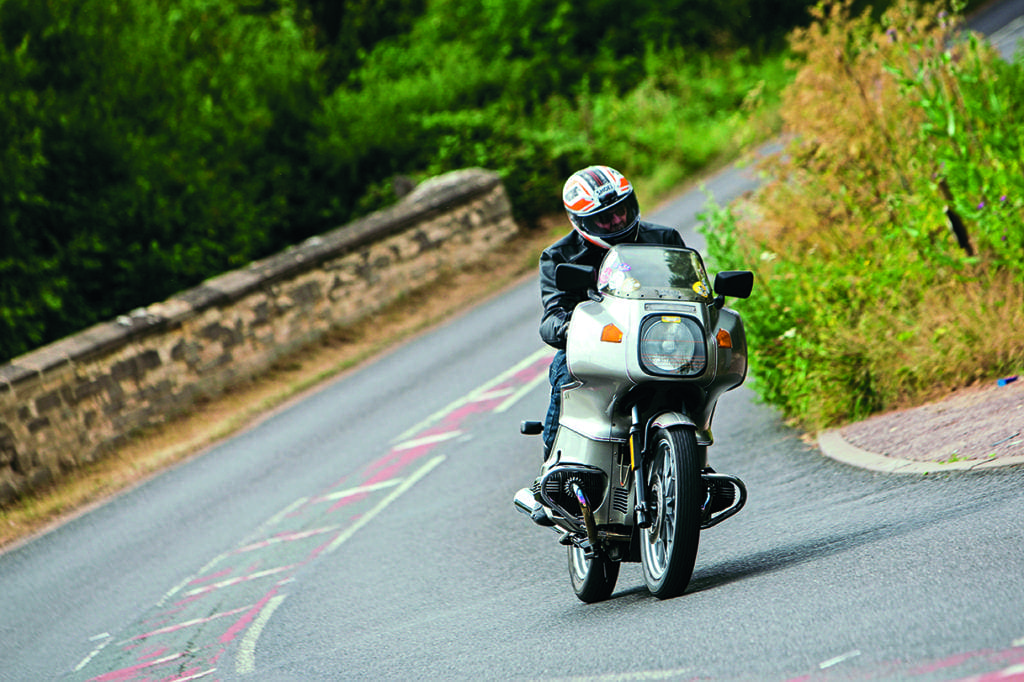 It’s a mile eater with a ludicrously comfortable seat and a fairing that makes long distance high speed journeys a pleasure, not a chore. The heat and noise reflected by that air-cheating plastic are instantly lost once you’re over 50mph. The front Brembo brakes do a better than adequate job even if the rear is effective but vaguely wooden. That all said, these anchors work whatever the weather which is more than can be said of the period offerings from BMW’s Japanese rivals. What you have with a big bore Beemer twin is a left-field answer to the question – how do you make a superbike? Trying to evaluate the R100 RS against a Kawasaki Z1000, Honda Gold Wing, Suzuki GS750/1000 or Yamaha XS1100 is akin to comparing a fresh water trout to a salt water cod. Both are of one genus yet totally different animals.

Purchase a big touring BMW flat twin for the wrong reasons and you’re likely to regret it and fairly soon too. It’s not a machine you can instantly bond with; that relationship takes time to mature. However, buy one to ride from London’s suburban sprawl to the wilds of Scotland and you’re likely to form a lasting bond. Oh and don’t be too surprised if the next trip is transcontinental; those old air-head Beemers really do get under your skin and they simply love a chance to stretch their legs!