There’s a school of thought that reckons two-stroke motors work best when their individual cylinders are below 125cc capacity. This month’s offering goes a long way to supporting that premise; Yamaha’s 180/200 twins just have to be one of the classic scene’s best kept secrets.

Get one of these little chaps in the zone and question just why anyone with half a brain would want an overweight 250. All the Japanese factories offered machinery in the 175/200 bracket in line with the early postwar European capacity classes and the bikes sold well to a broad spectrum of buyers.

In the USA the bikes represented something bigger and more macho than tiddlers and in the UK the capacity neatly dodged below a key arbitrary cut off applied by the insurance companies of the period. The fact that most machines below the 200cc bar were also significantly less expensive than a 250 also helped sway opinions and wallets. New for the 1968 model year the bike was one of several new designs based on the vertically split twin concept that had stood the company well up to that point. Given that the last of the YCS1’s progeny was the final RD200 sold around 1983 you might well argue Yamaha got the concept absolutely correct. 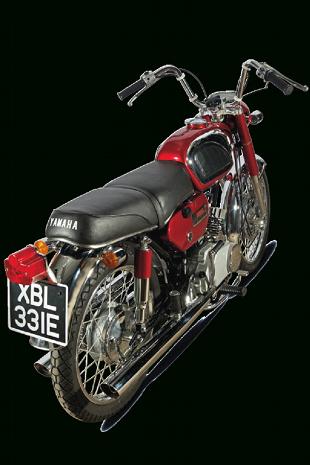 Variously entitled YCS1, CS1 or CS1E, the bike offered a substantially more powerful motor over the 125cc AS1 with very little in the way of weight or size penalties. Claimed to offer 21bhp the engine probably delivers a more realistic 17 but the bike makes the most of it. The apparently simple chassis with its single downtube and open lower cradle shouldn’t really handle as well as it does, yet frame flex never seems to be an issue. Unlike the AS1 the CS1 came with a decent front brake from the start and an analogue of the highly efficient TLS unit was later used on the 125cc clubman racers. The rear SLS unit offers bucket-loads of feedback courtesy of the taut rod operating system.

A strange facet of many Japanese machines within the 175/200 band is the use of an electric starter. Although there’s no real logic as to why such small engines required an electric foot most of the period competition came thus equipped. The Yamaha system utilises the crank mounted dynamo as fitted to many of the CS1’s predecessors but with an extra set of carbon brushes. When the starter button is energised from the button on the throttle assembly the control unit which also double as a regulator dumps current into the additional brushes thereby converting the dynamo into a motor. With a good battery and corrosion free contacts inside the control unit the starter dynamo will fire up an engine on the coldest day.

The CS series received almost yearly updates, growing to a full 200 in the guise of the 1970 CS3E. The final CS was the 1975 CS5E which runs the same basic DNA but in a substantially more modern set of threads. Typical of the period, Yamaha offered the CS1 as a street scrambler, visually differentiating it via a set of pearlescent white and corresponding pinstripe on the tank. Fitted with braced bars, rubber fork gaiters, high pipes and bash plate the CS1C is one of the most stunning tiddlers to come out of Japan during the 1960s. If you like the looks they are certainly worth going for.

Low mileage barn finds may have dry main bearings but the big ends often survive fine. The good news is that main bearings are a standard item; you’ll just need to source a C3 grade replacement. As the motor runs a labyrinth seal between the two cylinders and these very rarely fail, it’s only the outer seals than can fail and these can be replaced in situ.

If you fancy building a cafe racer from a snotter the bike lends itself well to this application and with thicker fork oil and some modern shocks the bike can be a real street sleeper.

How highly do we rate the CS genre? Well this column has owned seven and still has five in the stable with one more on the way. Fixation, stupidity, gluttony, naivety? You’ll have to try one before you can make that judgment but be warned; you too may be become obsessed.