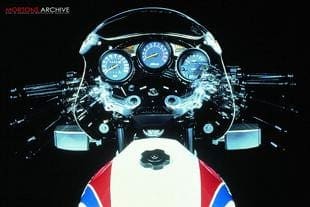 Launched in April 1983 at Yamaha’s test track in Japan alongside the YPVS RD350LC two-stroke twin, the XJ900 offered a more wieldy alternative to the bulk of the XS1100 four of five years earlier.

But the combination of a slim, compact but highly potent multi-cylinder engine – clearly a sporting package – with shaft drive was an unusual combination. Racers would never use it for track use, so how could it compete as a proper sports bike on the road?

Well it did, and very well, despite the additional weight of the Porsche-designed shaft and bevel gears in the rear wheel hub. The engine was mounted in a conventional duplex tubular steel frame that, although transmitting a bit of vibration at higher revs (more than the luxuriously smooth Honda with rubber mounts) offered neutral steering and remarkable stability when the bike was cranked over to the limit.

Its 58.3in wheelbase was shorter than the Honda’s by more than an inch, and if a weight of 534 pounds fully tanked up with 22 litres sounds hefty by today’s standards, it was in fact 33 pounds less than the Honda.

Much of the credit for the handling went to the Pirelli Phantom tyres which didn’t just grip well but gave so much feel on marginal surfaces that it had to be experienced to be believed. Suspension was conventional with a telescopic front fork and twin rear shocks.

The De Carbon-style rear units featured, in addition to the usual spring preload adjusters, remote reservoirs and three-position rebound damping adjustment. Compared with the XJ750’s, the 20mm-longer swing arm was braced and widened to accommodate a larger 120-section tyre.

Up front the fork was augmented, as was the fashion of the day, by adjustable air pressure in the legs and sliders connected by a brace. To minimise dive under braking, the compression damping was increased by valves controlled by brake pressure.

And what braking. Yamaha was, I think, unique in offering ventilated discs (275mm in diameter) in combination with opposed-piston callipers with almost unparalleled power and endurance.

Even after a number of eye-popping stops from more than 130mph on the test strip, the lever action retained its linear action without any sponginess.

Claimed maximum
But what was even more surprising was the XJ900’s power delivery. With a claimed maximum of 97bhp at 9,000, it would pull hard from 2,000rpm and rev to the 9,500rpm red line seamlessly through the gears, though the changes could have been less notchy.

At least the fairing protected the rider. Normally seated, I clocked a mean two-way top speed of 126mph, some five mph up on the unfaired Honda. At 100mph you were calm and relaxed as the wind was deflected over your chest.
Chinning the tank, the highest figure I saw on the clock was an amazing 150mph, but in fact this was 138.3mph. The two-way average top speed was 133mph, about 1.5mph better than the Honda.

A better measure of flexibility and throttle response was provided by acceleration times from a corrected 40mph in top gear through the quarter mile. Again the Yamaha had the better of the Honda, clocking 12.99 secs at 94.67mph compared to 13.42 secs at 92.20mph. 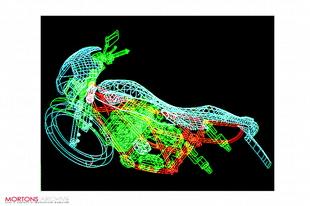 And if there was any need to confirm the superiority of the Yamaha’s performance, its fuel consumption throughout the test was 45.3mpg, five mpg better than the Honda and giving a superior maximum range of 220 miles.

Yamaha took note of the criticism of the XJ900’s handling and when it introduced a revised version of the bike in 1986 it came with a frame-mounted fairing that mimicked the smaller XJ600 four, along with a bigger 891cc capacity.

That should have silenced the dissenters, but by that time a new era of sports bikes had arrived and Yamaha’s touring slot had been adopted by the FJ1100 and later FJ1200 models.

So where does that place the XJ900 in the lexicon of classics? Close to the top of my list. Certainly it’s the best of the early shaft drive fours with much more power and better flexibility than the 650cc and 750cc versions.

And should you ask about durability, we know of one Dutch owner who has clocked more than a quarter of a million miles on the XJ900 he bought new in 1991. He likes it so much he bought another.

Barely a murmur… about wobbles, but then he had the later version with the functionally better fairing. It is a great bike, damned by its predecessors.