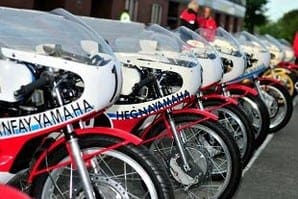 Buy any used motorcycle and you are undeniably taking a chance; buy something that’s badged as a classic and you’re potentially in uncharted waters.

It can be a minefield out there unless the bike in question is a known entity or comes from a mate or reputable dealer. The Yamaha SRX400 in camera came from Oxford Classic Honda where it was well know to owner Charlie Garratt. There are still a fair few SRXs out there and grey imports have swelled the ranks yet many have empathetically ‘gone over’ in terms of their cosmetics. Other than a very slight and vague noise from the top end of the motor the bike was a peach and ran pretty much as the chaps at Iwata had intended.

All went well until owner Eira Nichol noticed a worryingly damp lower leg that was doused in something that smelt disturbingly similar to petrol. The curse of the 1980s styling had struck; in the bottom of the tank, several inches below the fuel take off point, far too many years of condensation had settled out in the lowest extremities. The resultant extreme rot had eaten the steel away and it was obvious that a repair was out of the question. 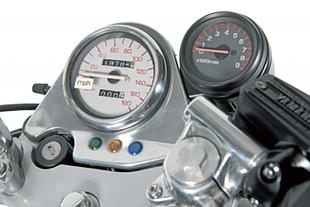 Amazingly new tanks were still available and therefore one was very swiftly obtained and fitted with a tank liner to head off the inevitable repeat performance. Courtesy of modern fuel the tank liner failed at the first filling and had to be removed in short order, Murphy’s Law anyone? With the new tank in place and free of flaking liner, the bike was ridden regularly until that previously mentioned noise began to irritate.

A slightly excessive love of oil suggested a touch of bore wear and this proved to be the case. At some time in the bike’s past it had experienced a mild seizure and just nipped a piston ring resulting in the aforementioned sound. New piston, rings and rebore soon sorted the bike out; job done. The only other job has been to the front brake which originally sported a gold Sumitomo caliper. These are okay if a little gutless so the hunt was on for a better front anchor.

Amazingly or fortuitously depending on your perspective, it was found that a silver spot caliper from an FJR fitted straight and, as might be expected, sharpened up the braking enormously. With everything sorted the mini-thumper has been a paragon of virtue and provides cheap thrills along with that essential SRX single experience.

Mention of monetary value reminds us we should politely disclose the bike’s cost which was just £750. Even when you add in the NOS tank, piston, rings and rebore that’s still a bargain in our books. Look at the price of a project these days and then try to convince us hardened CMM cynics that this isn’t classic biking on the cheap.