The greatest thing about the restoration of classic motorcycles is that you can now recreate precisely almost any machine that you once loved. Almost like meeting again that girlfriend who triggered the lust of youth only to go off to university, to be lost forever. This is all very fine, except when you do make contact with that beautifully rebuilt machine there is one thing you can’t change. And that’s you.

We’re all more experienced, a bit more rounded in the waist and, sad to say, more demanding about what bike should be capable of. (As an aside I should advise against the storing of old leather racing outfits, just as we tend to hoard old helmets, except that most of us are never able to get back into them without bursting seams and zips. It’s a horribly sobering experience). Which unless you’ve got a set of perfect rose-tinted goggles, we have to admit the riding experience is a bit anti-climatic, if we’re really honest. And which has led to restored bikes becoming mantelpiece decoration rather than weekend ride-out fun.

All of which is a preamble to a story ab 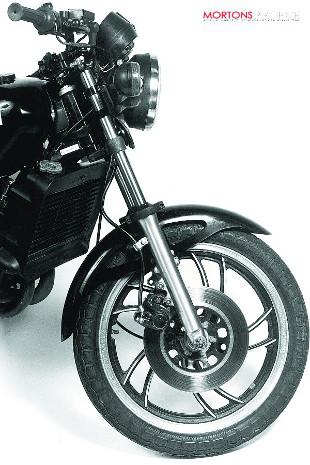 out the Yamaha RD350LC and the reasons why it is very much the subject of many a classic fan’s unrequited fantasies, more so than the power-valve version that succeeded it in 1983. The power-valve was much faster, handled better and had more potential for tuning, but the original LC offered a more engaging experience that viewed from 30 years later (yes folks, it’s that long ago) is still just as clear in the mind as if yesterday.

What made the RD350LC so thrilling is that Yamaha’s development team in Europe imbued the bike with an inordinate level of edginess in both its power delivery and handling. There’s no doubt in my mind that the Amsterdam-based team – influenced by then product development chief Paul Butler working with Yamaha NV’s engineering director Naito and former Norton–Villiers–Triumph designer Bob Trigg – could have developed a bike with better handling and flexibility.

But cost was the key challenge, and when the bike was launched in 250cc form on the UK market in 1980 it was still at a 20 per cent premium above the competition.

That didn’t matter much, because the bike was worth every penny, just for the delight of revving smoothly through the six gears and feeling as if you were Kenny Roberts or Barry Sheene dicing for victory on the last corner at Silverstone.

Key to the style that set the liquid-cooled 250cc and 350cc twins apart from their air-cooled predecessors was the large-capacity but well-proportioned fuel tank above the compact black-finished engine. Instrumentation was generous as were the various fittings, locks and details. The styling, from another former NVT employee Mike Oldfield, was as good as it got on a machine with a spine-type frame, with a huge radiator shroud, and expansion-chamber type exhaust pipes. Gone were the angular Japanese looks: this was modern integrated product design in its finest form, preceding power dressing, the era of computers and new wave music, all of which were the dominant trends of the 1980s. 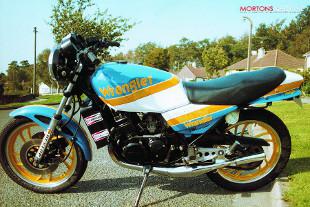 Seat of the pants measures of the RD350LC when it appeared later in 1980 were that it was even more exciting than expected. The engine droned up to 5000rpm and then seemed to explode, propelling its rider on some kind of out-of-control helter skelter that hooking up higher cogs in the six-speed box barely diminished. The madness continued until the speedo needle reached the 110mph mark, by which time you were hopefully still in control. At that speed the skinny 32mm fork legs and the Monoshock rear suspension were on the edge of their performance envelope, and any kind of road surface irregularity might induce a scary wriggle, just as it might on a race track of you were at the edge of grip.

But that’s not to suggest that the RD350LC was a bad handling machine, more that it encouraged its rider to spend more time at the edge of its capabilities. In most circumstances, itsroadholding and braking were peerless for the period.

It quickly proved to be the machine of choice for production racing. Stan Stephens, the doyen of two-stroke engine tuners, remembers when subsequent European championship star Gary Noel, as a novice, cleaned up race after race. At Brands Hatch, Stan recalls Noel on the LC, “whispering round Paddock with everything on the deck”.

By the time the RD350LC reached its second model year, flaws such as breaking exhaust pipes and the mid-range chasm in throttle response had been corrected. For tuners like Stan Stephens, experience with the engine highlighted the fact that it had been designed as a 250, which was hardly a surprise as that was the popular category on the Japanese domestic market, and simply converted into a 350cc engine by using 64mm diameter pistons in place of the 250’s 54mm slugs. With separate cylinders this meant that the transfer ports were too cramped and limited its potential, that wasn’t helped by using the same 26mm carbs of the 250 and the same intake reed-valves. Despite this, 47bhp was claimed by the factory, which for a machine with a 315lb dry weight showed why it felt so potent. 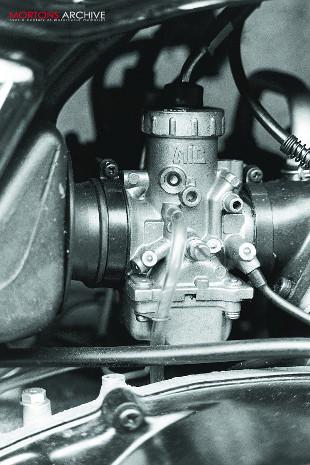 The test strip at MIRA’s proving ground in the Midlands revealed the truth however. Late in 1982, not long before the appearance of the YPVS version, I tested the RD350LC and found that it could barely reach 110mph flat out. As a rule, we would check the maximum speeds in two opposing directions on the timing straight using sets of light beams that were connected to electronic measuring equipment. The average of the two speeds would provide a comparison that took account of wind conditions (provided of course it wasn’t across the track).

This time one set of lights was out of action, so we had to calibrate the bike’s instruments so that two sets of speeds could be found. In the very slightly uphill direction with me prone, chinning the tank, the bike clocked a maximum in sixth of 104.29mph with a rev meter reading 9200rpm. In the opposite direction the rev meter needle stopped at 9700rpm, or an equivalent of 110mph. This was double checked by calibrating the rev counter at a true 6800mph, when it read
6200rpm in top.

For the record, the mean two-way average was 107.1mph, or around 8mph better than the 250, and not a lot quicker than many of the 400 four-strokes of the time. But at least the acceleration was reasonably impressive, with a mean standing quarter-mile time of 13.82 seconds with a terminal speed of 92.03mph.

The calibration process also highlighted just how optimistic the rev meter was, much more than the speedo (one per cent). By calculating the actual revs from the gear ratio, rolling diameter of the rear wheel and a true speed measured through the timing lights, it turned out that the meter was reading six per cent fast. So that 9700rpm reading in top gear was in fact just over 9000rpm.

This squared with the tuning theories of Stan Stephens, who reckoned there was not much to be had from revving these engines at more than 9500 to get more power. Nevertheless, he revised the porting on a set of 350LC barrels which were fitted along with a selection of exhaust systems to the RD250LC that I’d been using at Which Bike? magazine at around the same time as we’d tested the RD350LC at the end of 1982. 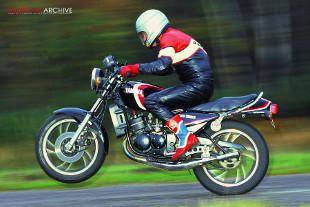 The effect was dramatic. With a set of prototype Allspeed pipes supplied by Peter Gibson and gearing raised by using 17/39 rear sprockets (one tooth up on the gearbox, compared with the stock 350LC), the engine developed much more power from 8000 to 8500rpm and zipped through the timing lights at an average 121.8mph. Acceleration wasn’t so much improved, because it was difficult to get away from a standing start without looping the bike. Even so it produced a time of 13.51 seconds with a terminal speed of 101.0mph, which was superbike performance.

A pair of Allspeed Mk2 production pipes improved the top speed even more to 122.6mph but acceleration suffered slightly with a time of 13.52 seconds at 100.29mph. Switching to a pair of Micron pipes produced the biggest surprise however. Revving to more than 10,000rpm through the gears, the bike clocked 121.99mph and 132.64mph in each direction, for an average of 127.3mph. That was 750cc territory.

That was more than the following year’s stock power-valve 350LC, which recorded a top speed of just less than 120mph and illustrated that there was power to be had from the earlier model, though at the expense of flexibility. There wasn’t much to be had at less than 8000rpm, making it more like a TZ350 racer to ride. Nonetheless, the original Yamaha RD350LC twins are still regarded with affection and awe in equal measures, both for their looks and performance.