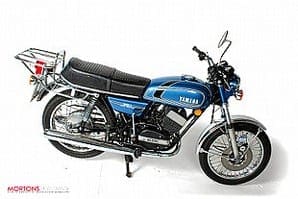 With light weight and decent torque allied to a race developed (hence RD) chassis the bike was pretty much an instant success. In the post learner/middleweight market the RD350 was every inch a street sleeper just waiting for a bike more than twice its capacity to pounce on and figuratively shred to pieces.

Launched in 1973 as the RD350, the bike remained pretty much unchanged through the A and B model revisions – save for cosmetic, exhaust and induction changes. The one big change was the official adoption of the six-speed gearbox. As far as is known, all UK RD350Bs came equipped with a six-speed 'box, whereas the RD350 and 350A had the sixth gear blocked off and re-geared to suit. The B model arrived with the sixth gear fully functional and safe. Urban myth or fact, the word on the street was that if you didn’t modify the quasi-five speeders properly a nudge up from a newly acquired sixth would have the bike back into first. A surer way of focusing the motorcyclist’s mind has yet to be found! 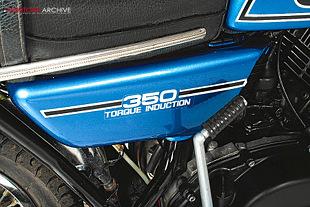 Graphics of the UK B mirrored the B family models across the Yamaha range; often referred to as ‘the swoopy curvy ones’. USA models feature a slightly smaller tank and (bizarrely for America) more restrained decals. Developed from the YR5, the RD range embraced the reed valve technology that improved toque, hence the Torque Induction side panel stickers. Ironically Yamaha wouldn’t run reed valves on their race bikes for fear of the stainless reeds fatiguing and exiting via the exhaust ports! The B model also differed in subtle way with its own 521 series exhaust system. B models will run happily on their forerunner’s 360 series pipes but, if you are doing a spot-on restoration, it’s these little subtleties that can make the difference.

On a similar vein of subtle differences, the earlier RD350s had a habit of developing poor idling due to issues with pilot airways and fuel deposits clogging up drillings etc. The 350B utilises an air pipe from carbs to air box which alleviates most of the earlier problems. Talking of carbs, the sharper 350B owner may be confronted with two different carb tops, lower cables and guide tubes. The very first B models came equipped with the wrong combination of same and with a shower of rain to very slightly swell the carcass of the outer cables the throttles would stick in the open position. Speaking as an owner of a 350B thus afflicted I can vouch for the veracity of the kill switch!

In an attempt to potentially sanitise the 350’s performance and curb an alleged thirst, successive RDs went through a number of carb and inlet revisions. Although still capable of frightening wheelies and phenomenal acceleration, the B model was, perversely, also capable of outstanding fuel efficiency. Riding two-up from a Transatlantic Mallory race in the company of Kettles, 500/4s, Bonnevilles etc I once recorded a remarkable 65mpg! 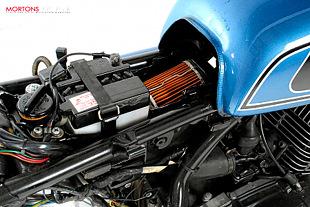 From a practical point of view, the RD350 range is still an eminently viable bike to both own and maintain. Provided with quality oil and petrol, the engine is a paragon of reliability. If anything does need fettling, most of the key parts are readily and easily accessible; in fact it’s quite feasible to carry out a top end rebuild with the motor in the frame using the bike’s rather basic tool kit. You really have to try hard to kill a standard and unmodified RD350. To further illustrate the bike’s inherent strength, the 350B was made under licence in India as the Rajdoot (or Ambassador) where its 'bullet' (sic) proof credentials made it a firm favourite with the locals.

If buying now make sure you aren’t looking at a 250 that’s had bigger barrels and pistons simply lamped on its crankcases. This was a popular dodge for learners looking for a bit more oomph. The carbs, oil pump and primary gears differ from 250 to 350. Likewise there are still many YDS7/YR5 meets RD250/350 ‘pick and mix’ hybrids out there. If in doubt get expert advice; it’s oh so easy to buy in haste and repent at leisure. Don’t be put off by apparent non-standard colours or rear lights. Although the official UK bike only came in silver dust and with a ‘Fizzy’ rear light all manner of models from other countries have found their way to the UK. Look out for Regal blue, Spanish burgundy, Brilliant red and competition green with an array of rear lights.

Before they are all gone, or legislated off the road, buy an RD350, lurk about on fast sweeping roads and scare the bejasus out of a Trident or Honda 750/4 owner. Pull in at a roadside café and quietly smile at the vanquished owner’s ashen face. Goliath nil, David one!

What goes wrong?
By 1974-75 you’d pretty much expect Yamaha to have got their parallel two-stroke twins right – and they did. The RD350 is a very sound bike and not prone to throwing hissy fits like some strokers.

Number one concern at this age is going to be guards, seats and general tinware. Yamahas of the early to mid-70s have guards that are only 50-60 per cent steel; the rest is sub-plating and chrome. Re-chroming is always a gamble.

Seat foam at this period had moved away from natural foam to synthetic so doesn’t act as a sponge but bases are still liable to rusting; the stainless steel seat trims were never available as a spare so beware. 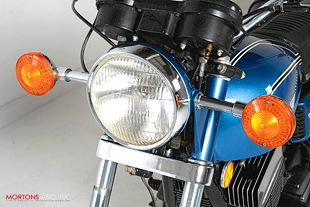 The silver dust RD350B paint was fairly mediocre and steel corrosion is quite common. Many RD350Bs also suffer from poor decal quality and application; ridges in side panel stickers are evidence of originality not necessarily a poor restoration!

Brake calipers are surprisingly efficient, but pistons can seize making pad replacement entertaining. Good news is that the caliper splits into two making an overhaul fairly easy; use new seals, bolts and O-rings as per the parts list. Before assuming the pistons are rusted in, check the master cylinder is clean. The small fluid return hole can silt up and only gradually release pressure; a strip down and clean can resolve the problem, but check on availability of components and have them ready to hand.

Blocked baffles will very quickly kill performance; use quality semi synthetic oil and decoke if the bike’s history is unknown. Timing doesn’t slip on an engine unless you didn’t tighten up the backplate screws! Points, plugs and timing are essential maintenance points on these bikes. If possible fit an aftermarket, solid-state system and simply enjoy total reliability and guaranteed performance.