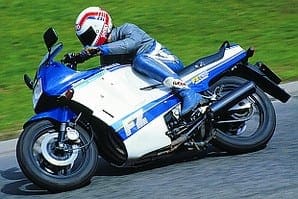 1985 was Year One for modern motorcycling. OK, so Kawasaki’s GPz900R had sort of got things started the year before, but we’d had water cooling since the Scott Flying Squirrel. And 16 valves since the Honda CBX1000.

But Yamaha’s FZ750 was something very special. Yamaha were late to the four-stroke party and even later to get their tech heads into gear. But this one, the Yamaha FZ750, really did go up to 11. The redline of that wonderful 20-valve engine was 10,500rpm, but the clever cylinder head design let it hold onto power for another 500rpm or so after that.

In fact, by most measures  of the time, Yamaha’s FZ750 went up to 12, so radical and innovative was the thinking in that all-new engine. We didn’t know it at the time, but Yamaha were laying the foundations for the second generation of Japanese motorcycles. The FZ wasn’t officially part of the Genesis family (that started with the F1 race bikes and then the FZR1000 in 1987 and was all about a philosophy of building bikes as one – no longer an engine and a chassis), but much of what came next started in the FZ750.

Launched a year after the GPz900R, the FZ750 was Yamaha finally joining the big time. Previous Yamaha four-strokes had largely been clones of other Japanese bike or old British knockers. The XS range never really delivered and the XJ’s, good though they were, were eclipsed by the Hondas and Kawasakis of the day. 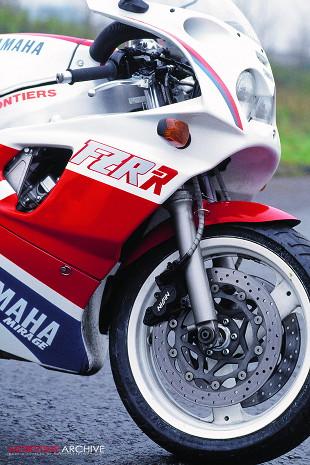 But the FZ was different. It blew Honda’s ‘vision-of-the-future’ VF range away. It made the GPz look like a stop-gap and even Suzuki’s all-new GSX-R seemed just a conventional motorcycle made with futuristic materials. The FZ had the engine of the future and a semi-beam frame that hinted of what was to come. The front suspension talked of ‘compression damping’ when others still spoke of anti-dive. Swapping the position of the fuel tank and airbox meant the mass was more centralised and having the engine canted forward gave the right weight distribution for better handling. Yamaha – a confident company who’d dominated recent two-stroke design were showing the same innovative thinking in four-strokes. They’ve been leading the field ever since.

1 It was Yamaha’s first four stroke race replica
‘A four stroke in the RD mould. An F1 racer with street equipment,’ they said at the time. And funnily enough for a 205kg bike, it felt like it too. The riding position was RD-familiar, the clocks had an RD-feel and the cowled tacho felt terribly cool.

2 It set the rules for a generation of sports bikes
An inclined engine gives a straighter, faster path for air and fuel into the cylinder head. Reversing the position of the fuel tank and airbox allowed a bigger airbox and the fuel to be carried lower and more centrally, while pumping fuel into the carbs allowed the use of downdraught units for more power.

3 The project started in 1977
By this time the two-stroke was all but dead in America – the world’s biggest motorcycle market. Yamaha needed to get four-stroke serious but were lagging behind. Even the newly launched XS range was outpaced by the competition. The prototype was codenamed ‘Project 064’and was a 16-valve, air-cooled machine. No one remembers what 63 and 65 were but this was the big one.

4 Five valve heads allowed optimum cylinder head design
Yamaha, like everyone else at the time were looking for the most performance and better fuel efficiency. They reasoned that simply increasing the valve sizes on a four valve engine would mean a flatter combustion chamber when the perfect shape is a hemisphere. More valves allowed the use of narrower valve angles, which permitted a ‘hemi’ shaped head with a smaller volume than other heads for increased compression ratio. More valves also gave a larger intake area and better gas flow without needing large degrees of valve lift that could have been unreliable. And using more, but smaller valves meant they could be lighter. Which meant higher valve speeds and more rpm for increased power. Lighter valves also meant lighter valve springs for less flutter at high rpm, better seating and less power loss in valve train operation.

6 And seven
Four inlet (including one in the middle, three exhaust valves and two spark plugs (one either side of the central inlet valve). Which gave even better gas flow but less flexibility and had a 20,000rpm redline. These were the days when Yamaha were involved in building Formula One engines so anything and everything was tried. Seven valves worked but
they were worried that they couldn’t mass produce such a delicate engine.

7 And a V-four
By the early 1980s Yamaha were already developing their V4 two-stroke GP bike. They understood the benefits in packaging, weight distribution and traction from a V4 but eventually went for an inline engine to keep production costs lower. By the time they got to prototype number 11, built as a racer, the engineers were getting 130bhp from 749cc
and 25 per cent more torque than from the two valve engines still  being developed for the XJ and FJ ranges.

8 Downdraught was the future
Yamaha were also developing their V-Boost system for the V-Max. This system, effectively a twin-choke downdraught carb for bikes, required the airbox to move in front
of the fuel tank and to sit directly above it. Yamaha’s engineers discounted V-Boost for the FZ, but adopted the downdraught idea to give more gas at higher speed to an engine that wanted to rev. Bike number 11 was adapted in 1983 to be the basis of a new roadster. Detuned to 100bhp for reliability. Yamaha were there. 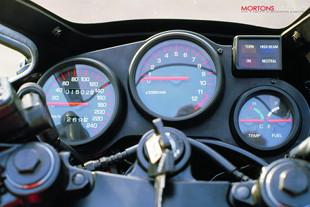 9 It was the genesis of the ‘Genesis concept’
Yamaha’s Genesis concept defined sports bikes of the late 1980s but it wasn’t about just having five valve-heads or alloy beam frames. Genesis was about designing the motorcycle as a whole – getting away from the traditional Japanese problems of too much power in not enough chassis. The FZ750’s engine and chassis design worked as one.

10 And the steel frame’s last stand
Suzuki’s GSX-R might have had an all-alloy cradle frame but it was still essentially the same design as your dad’s old Norton. Kawasaki had used a spine frame on the GPz, but the future was Yamaha. The FZ’s frame spars came out and around the engine. Still high, like a cradle, but it was the beginning of the beam frame. The next generation wore their frame spars lower and wider to give more room for bigger airboxes. And after the FZ, it was all alloy.

11 Within two years it was obsolete
Such was the pace of development at that time. Honda’s 1986 VFR750 had an alloy beam frame, and a V-four 16-valve engine that made almost as much power and better midrange. Kawasaki’s GPX750 made the same power from a 16-valve engine in 1987 and Bimota’s YB4 showed everyone the future of chassis design. The competition was learning fast. The FZ became the FZR1000 in 1987 – a proper race replica with an alloy beam frame plus suspension and brakes from another world.

12 But in racing, it was still good enough to get Eddie Lawson his first Daytona 200 victory in 1986
Lawson finished more than a minute ahead of Kevin Schwantz. It also won British Superstock in 1987. FZ750s filled four of the top five places and seven of the top 10 in British Superstock. Keith Huewen won the title by 35 points from Roger Hurst, also on an FZ.

13 Harris built the fairing lowers
By 1986, half fairings were for losers no matter how pretty your engine looked. Yamaha needed a full fairing and Yamaha UK approached Harris Performance to build some as a £300 option. By 1987, Yamaha had redesigned the FZ as a fully faired machine.

14 It was the future of front suspension
Yamaha ignored the fashion for anti-dive front forks and instead talked of variable self-adjusting compression damping – essentially a valve in the front forks that controlled the oil flow depending on the rate of travel.

15 But not at the rear
The single shock fitted to the FZ had adjustable preload and rebound damping, but the preload was adjusted by a small chain, similar to the early RD350YPVS. And just like the RD, the chain would break after one winter’s use.

16 The oil light measures level, not pressure
Like most Yamahas up to the mid-1990s. So when the light comes on, chances are it just needs a top up, not a bottom end rebuild.

17 In seven years’ production there were only two official updates
The 1987 revamp got a full fairing, four-into-one exhaust, minor engine modifications to reduce friction and a milder exhaust cam. A new rear shock absorber and revised linkage to give more wheel travel, revised fork internals and solid brake discs. The 1991 revision brought new wheels including a 17in front, bigger discs and four-piston front brake calipers from the FZR1000. 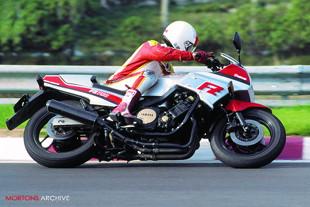 18 Decent aftermarket exhausts are scarce
Motad’s race pipe added 10bhp if you also raised the front of the fuel tank half a centimetre. But was loud enough to deafen Lemmy. Motad don’t build noisy pipes for the road and the limited numbers they built for racing were very carefully controlled. But some of the handcrafted pipework did escape the paddock and (literally) caused headaches for both riders, villagers and coppers everywhere.

19 It had the longest bar-end weights we’d ever seen
No one knows why – the FZ engines aren’t especially vibey. But plonking your hands on an FZ’s bars was a very different feeling. Slim grips and a lot of metal sticking out. Thankfully the riding position was spot-on.

20 It revved to 11,000rpm, but was also a longer stroke engine than the GSX-R or VFR
Long stroke means better midrange but also high piston speeds and usually lower redlines. Thankfully, the FZ was built to last. The smaller intake valves were also 20 per cent lighter and that, coupled with the downdraught technology allowed the Yamaha to make more power throughout the rev range and hold onto it for longer. At 7500rpm, the FZ made 15bhp more than Suzuki’s GSX-R750.

22 It was the fastest accelerating 750 too
Despite weighing 29kg more than a GSX-R, the FZ’s flexibility and power advantage made it a tenth of a second quicker over the standing quarter mile. 11.3sec for the FZ, 11.4sec for the Suzuki.

24 Valve clearances adjustment schedules were 28,000 miles apart
Because the lighter valves were less stressed and less likely to go out of adjustment, the service intervals could be longer.

25 In 10 years time they will be expensive
FZ750s are cheap right now. Hacks at best, but many have been cruelly streetfightered or just left to rot. Unfair because this is a landmark motorcycle. The first of a new generation and possibly Yamaha’s greatest ever road going moment. Buy now or kick yourself forever.