You’ve got to feel sorry for Yamaha sometimes. Their timing is terrible. So many times they launch a good bike and it gets aced by the opposition. Okay, so there are exceptions (350LC, R1, etc) but the FZ750 is only now reaping the appreciation it deserved when it was brand new.

When it appeared, it was regarded with suspicion. A 20-valve head? Too complicated mate.

In truth, this was a pretty revolutionary engine. Watercooling wasn’t anything wildly different (when the FZ appeared here in March 1985 the Kawasaki GPZ900R had been around for a year) but five-valve cylinder heads certainly were.

Yamaha even tried using seven valves, believe it or not, but there wasn’t any appreciable advantage and it cost more. So successful was the five-valve concept that Ferrari bought the rights to use it – and you can’t get a much better testimonial than that. The original bike also pioneered down-draught carbs. The frame was made of box-section steel, in a sort of semi-FJ1100 style, and the front wheel was the obligatory 16” job.

On the launch journalists compared it to the GPZ900R and Yamaha was rather miffed until it was explained that this was actually a compliment. The FZ had a top speed of about 145 mph but, more importantly, had an utterly amazing power spread. 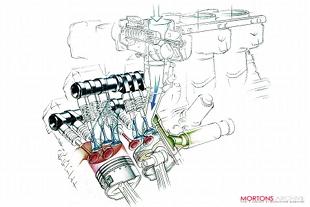 Unfortunately it looked hideous, with a styling job that married straight lines and curves to provide a complete visual mish-mash. In January 1986 the model was released with a Harris-designed belly pan, which cleaned up the looks a bit but it was still no beauty.

In 1987 Yamaha revamped the bike completely with a full fairing, four-into-one exhaust, drilled rather than ventilated discs (see below!) and no centre stand (thanks to the new exhaust and the fairing). Nobody bought it then either.

In 1989 it got a 17” front wheel (long overdue), floating discs and four-pot calipers (ditto) but again, nobody wanted it and the dear old FZ petered out at the end of 1992.

Yamaha had developed it into the race-rep OW01 in 1989, which was definitely a different kettle of fish, and from 1993 we saw the YZF750, which used a development of the 750’s engine. By then Yamaha had the Fireblade to contend with. Poor old Yamaha.

What ought to be pointed out is that in the late 1980s and early 1990s the Yamaha engine was proving an amazing racing engine. Yamaha’s Genesis endurance race version was a Bol winner and many privateers (including Team Bike of fond memory) used the engine. Unfortunately, the Suzuki GSX-R750 was more of a racer from the crate – which was why so many privateers opted for it.

What goes wrong
The engine is very, very strong and long-lived. Yamaha reckoned the first valve shim adjustment wasn’t needed until 28,000 miles, which proved a mite optimistic (20,000 miles was nearer the mark).

Even so, the motors could be run and run and run with no ill effects. There were some isolated head gasket failures and the gearbox sprocket seal popped on a couple – tiresome, as it was a major job to fix. But no, the engines were brilliant. And they still are.

Ancillaries were a problem. The original twin-pot calipers were simply not up to the mark and Lockheed, through their then agent Andover Norton, actually offered a conversion. The calipers seized up in winter as well but this was a Yamaha – and they all do that.

Also, the early model ventilated discs were horribly prone to warping, one reason why they were changed to drilled and then floating discs. Fork seals popped regularly, which may have been why, from 1987, Yamaha ditched the air forks originally installed.

The 16” front wheel limited tyre choice and was more a fashion victim than the result of proper chassis engineering. 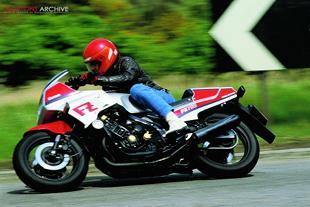 What to look out for
Ideally, you want a service record, especially when it comes to the valve clearances. With 20 valves and the shims located under the buckets (making this a cams'-out job) a valve re-shim on an FZ750 is a big job.

If it hasn’t been re-shimmed for 15,000 miles or so, budget for one in the near future and reckon on replacing as many as 12 or 15 shims. You may be able to mix and match shims – and you’ll need to, because they cost more than £3 each.

The suspension is pretty weedy by modern standards. However, there’s an awful lot of aftermarket stuff (and bits from other Yamaha models) that will fit so don’t worry if it isn’t wearing stock forks.

Check for race use. It’s unlikely, but have a look to see if the sump plug has been drilled.

An FZ750 I bought could be started by touching the wire from the starter motor solenoid to the battery but a simple repair was effected by by-passing the indicator relay altogether (check the wiring diagram!). This meant that the starter circuit was always live, so the starter could be spun even when the ignition wasn’t switched on – but the bike wouldn’t fire because the ignition circuit was still isolated.

As mentioned above, try the brakes. Any juddering means the discs are warped. They can be trued up in a hydraulic press, but PFM replacements are probably a better long-term bet.