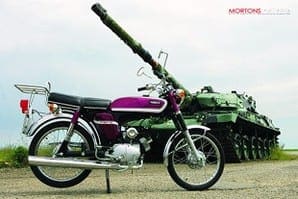 Last year I was wandering around the autojumble at the Stafford Show with the wife, when we paused in front of a stall selling a bashed and tatty Fizzy as a restoration project, priced at £750. "What is it with the FS1-E?" whispered the missus in my ear; "prices seem to be moving by one decimal point every year!" I took her point – 12 months earlier it wouldn't have been unreasonable to expect to pick one up for £75. If the trend continues, perhaps we can expect to see a minter go under the hammer for £7500 at Stafford this year – a scary prospect.

Over the past few years, the humble FS1-E has taken on the mantle of an icon, and become one of the more recognisable symbols of 70s culture. As the 70s nostalgia boom continues with TV shows like Life On Mars and re-runs of The Professionals, there's no sign of a slowdown in the Fizzy’s inexorable climb to the peak of unreachable museum piece. 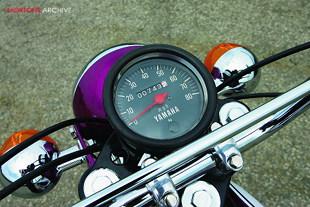 Of course, like many classic bikes, the FS1-E appeals to those who had one at the time (or wanted one and weren't allowed!) and simply want to recapture a bit of nostalgia. Nothing wrong with that. But for the hordes of restricted sixteeners forced by law to buzz around on 50cc mopeds for their first year of biking back in 75-76, it's odd that it should be the Yamaha sports moped which has taken the crown. For at the time, it was never really considered to be the best 'ped.

The smart money was always on the European models from Puch, Garelli and Fantic. The Japanese sports mopeds were always a wee bit league divison two in the performance stakes, though the simple economics of supply chains and marketing meant they were more readily available in the showrooms, and probably with better finance deals to sell them by. And before I get a good kicking from outraged members of the Sports Moped Owners Club, here's a couple of first hand recollections from those who were there.

When Motorcycle Mechanics took a purple Fizzy, just like this one, on an extended group test in 1976 against an AP50, a Puch Grand Prix and a Fantic Caballero, it didn't fare too well. Acceleration was noticeably slower than both the Puch and the Fantic, and the Fizzy further disgraced itself by breaking down with a blown fuse and wet electrics. When the fuel tank ran dry after only 10 miles on reserve, leaving the tester stranded at the roadside waiting for mobile phones to get invented, it lost a couple more kudos points. More problems were caused by the points closing up, and air leaks at the carb. A partial seizure put the icing on the cake, and the poor Fizzy limped in at the bottom of the league table. 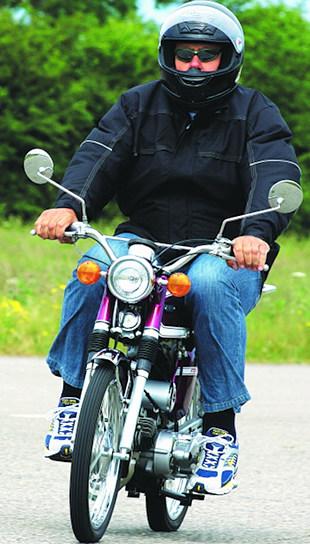 In a similar group test in April 1977, the FS1-E DX (the ultimate, disc braked Fizzy with Kenny Roberts speed-block paintwork) gave an equally poor showing, being slower than the opposition (including a Suzuki AP50). While scoring highly for its effective front brake and economy (91.6mpg), even a 16-year-old FS1-E owner recruited to try the bike out preferred the Fantic GT.

So why has history been so kind to the Yamaha FS1-E? Well, we think it's not so much to do with mundane details of performance and reliability, it's more to do with how right the Fizzy was for the times. Every now and again the motorcycling world releases a bike which simply has all the styling cues hit squarely on the head, something so fresh and innovative that it immediately strikes a chord with the public. Immediately branded as 'the real thing', everything else is less. The Fizzy was simply so well proportioned, so pretty and so right that it was that rare thing – more than the sum of its parts. It became fashionable, and in a peer group where all your mates had Fizzys, you wanted one too.

This example belongs to Nick Sykes, a long time Fizzy enthusiast, who has restored this example to the brink of mintness – it’s so utterly perfect it takes your breath away. Not surprisingly, it has taken a good few trophies, and it was while sorting out the prizewinners at last year’s Wolds Run that I first met Nick, who at the time was looking for a way of bungeeing his trophy for ‘Best Jap Bike’ onto the Fizzy for the ride home. 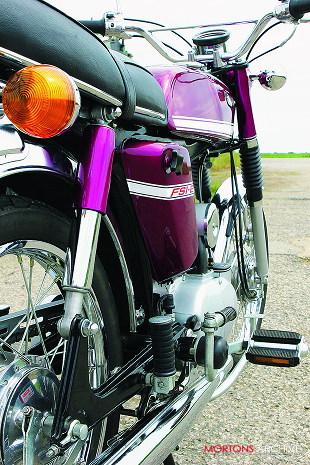 And ride it he does – but not quite in the way it was originally intended. One of the attractions of the FS1-E for Nick is the bike’s diminutive size, which means it can be strapped to the back of his family camper for trips to Europe – where the little Fizzy gets unhooked and fired up for buzzing round the back lanes of Spain or Southern France while the kids stoke up the barbecue. It's a whole other take on how to enjoy classic biking.

When he kindly offered to bring the bike down to Lincolnshire for the photoshoot, the camper van came too, and while ace picture snapper Wilkinson was busy shooting Nick’s mate Mick’s Kurz Z1000 for our December 06 cover, Nick got busy and provided all involved with a steady supply of tea and biscuits. All very civilised, and all rather British.

In a way it marks the full transition of the FS1-E from cheap teenage transport into an honorary member of the family silver, kept and pampered and enjoyed simply because it represents such an important stage in a young man's life. Who cares if the Puch Grand Prix was a little bit faster, or the AP50 had a better reserve range? It's all academic now, and admit it – the FS1-E was always the finest looking sports moped. And the purple ones were the prettiest…