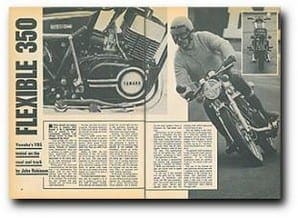 I must confess that when we picked up the YR5 Yamaha, we weren't quite sure how it would behave. Because of Yamaha's racing development, there was a tendency to expect a really pokey performance machine; and the YR5 frame is a direct descendant of the works racer, so we were anticipating road­holding with a capital "R".

Having given the cycle such a mental build-up, the real thing was a bit disappointing The engine, with its matt black castings, looks the part, and this was the most striking part of the machine. The cycle parts are well finished and gaily coloured and the frame looks really businesslike.

The first ride came as a bit of a surprise. The engine needs two or three prods before it burbles into life and only needs the choke for a minute or so.

There is usable power from below 2000 rpm and no need at all to buzz the motor to go quite quickly. More power comes flooding in once the engine hits 4000 and then you start to go really quickly. 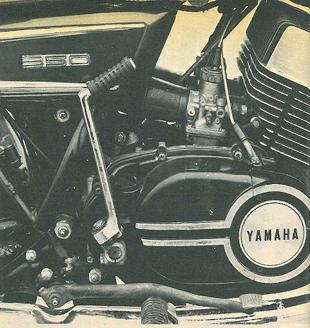 Ridden in traffic, the first impression is that the brakes are all at the rear with nothing at the front. This was partly explained by the extraordinarily long rear-brake pedal which gives enormous leverage at the brake; on greasy town roads this had to be treated with some respect as it was all too easy to lock the rear wheel.

The front brake worked reason­ably well, but needed a lot of pull to produce a quick stop. This itself is doubly unusual, firstly because twin-leading-shoe brakes are usually light and firm in their operation; secondly, all the Yamahas we have tested before have had superb brakes.

Similarly, the riding position is a bit odd. The bars are short and flat, usually making for comfort, and the footrests are well positioned in relation to the seat. But the resulting riding position is too cramped. The handlebars should be further away from the seat, or the foot­rests should be set further back —one is neither leaning forward nor sitting up. I might add here that I am of average height and don't consider myself deformed. I should also add that although our machine had the flat bars, most YR5s are equipped with wider, slightly raised bars.

On the track, the riding position makes itself more noticeable—it is very difficult to find a suitable position for high-speed riding; not a prone, flat-on-the-tank racing position, but a leaning-into-the-wind position which is necessary for high-speed road work.

Performance, as far as sheer speed is concerned, was also disappointing. Even with the rider prone, using the rear foot­rests, and in favourable weather conditions, the highest top speed we could obtain was 92 mph, despite Yamaha's claim of over 100 mph. The speedometer error at this speed was 1 mph optimistic, worsening to about 3 mph optimistic at 40 mph.

Undergeared
In all fairness, it seemed that the Yamaha was undergeared because it reached the redline of 8000 rpm effortlessly in top gear and would hold its speed into a headwind.

In the test, it also seemed that the gears are too widely spaced. At Snetterton only fourth and fifth were necessary, apart from a brief shift into third for the hairpin. Bottom gear seemed miles too low, but perhaps under really tough going it would have its uses.

Also the engine is very tract­able and has a wide power band, so a close-ratio gearbox isn't necessary, but as Yamaha have chosen to fit five gears, I would suggest that it would be better to have top as an "overdrive" rather than bottom as an "under-drive".

The gearshift itself is a pleasure to use; along with a light, positive clutch it makes for quick, easy getaways. If our full-bore acceleration tests are anything to go by, the clutch is also very robust.

The rest of the controls are well positioned and all work with a positive action which inspires confidence in the machine as a whole. One particularly nice detail is the wing mirror which gives a clear view of the road behind and doesn't jut out causing an obstruction when filtering through traffic.

Apart from criticism of the riding position, the YR5 has very good weight distribution, giving firm and direct handling on the road. The engine is powerful enough to lift the front wheel in first, second, and third gears, although these gears are fairly low. Even so, for a machine with a definite lightweight feel, there is a healthy power-to­weight ratio.

The handling, which is good on the road, was not as good as it might be on the track. Bearing in mind that we were not "scratching", the machine had a definite tendency to twitch under heavy braking, or on a bumpy surface. 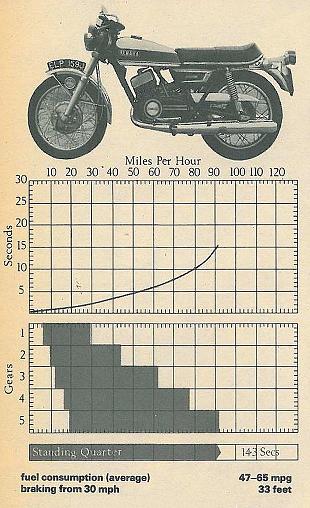 The brakes, or rather the front brake as the rear one is hardly used for high-speed riding, were not up to the standard we had expected. This, along with the handling, prompted us to ask Mitsui, the Concessionaire, to check the bike over. After all, the frame was developed from the RD56 and the TR2.

However, the YR5 is intended for road, not track, use and until it is really pushed these faults do not stand out.

The engine is very well silenced, even at high speed, and runs completely smoothly.

Fuel consumption is roughly what one would expect—if you thrash it, it drinks the stuff up at less than 50 miles to the gallon. If you really ease off, it soars to something around the upper 60s. Oil consumption, with Autolube injection, is virtually negligible.

In the machine's favour it can be said that it has the peak power expected from a two-stroke, and Yamaha have made a good job of building in bottom-end power usually only associated with four-strokes.

The days have long been gone when two-strokes drank oil along with their petrol, and carefully arranged silencing now puts the YR5 on a comparable footing to four-strokes in both these respects.

As for accessories, the lighting and indicators are good, as they should be, and the rear light seems to get bigger every time you look at it. It's a pity that Yamaha haven't followed the trend of other manufacturers and fitted a stop-lamp switch to the front brake.

The engine, frame and front forks all go to make the YR5 look like a powerful roadburner, and if the revs are kept up, it is a roadburner. On the other hand it is smooth, quiet and docile all the way down to tickover.

Obviously the Yamaha en­gineers could have made the engine more powerful at the expense of its tractability, but for road use you don't often need that extra power.

After all, it accelerates briskly up to the legal limit (it takes about eight seconds if you hurry things) and it will cruise at this speed effortlessly.

Admittedly we were expecting more of an out-and-out perform­ance machine, mainly due to the image we had built up of the YR5 especially in an age where every other new machine seems to be one of the super-bike variety.

But taken in its context of a medium-weight roadster, the Yamaha presents a smooth, well-finished, reliable machine which does have a respectable performance.

It could have had more attention to detail; for instance, as the engine can be thirsty we would have liked to see a larger fuel tank. The riding position could also be improved, but this could be put down to personal preference, so the only major criticism is that front brake.