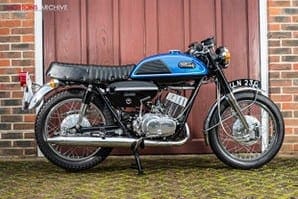 Yamaha’s YR3 represents the third and final iteration of the company’s first full-on 350cc sports machine. Back in 1966 it was very evident that Yamaha was rapidly catching a cold when it came to machines over 250cc. Overboring the vertically split engined YDS series was only ever going to be a stopgap measure but for a while it looked like it was Yamaha’s only answer to Honda’s CB77.

Following Suzuki’s launch of the Super Six T20 it was obvious that the way forward was with something similar but bigger. Project YX03 delivered the genuinely new, if slightly quirky, YR1 and the company finally had a fully fledged 350 sports twin. The following year the engine and peripherals were revised to deliver the YR2 and for 1969 Yamaha rolled out the YR3 as seen here.

The bike might only be a 350 but both it and its predecessor established the concept of a sport 350 stroker as a giant killer. This was largely due to radical revision of the porting used on the original 1967 YR1.

In place of the initial three port system Yamaha installed two Z-shaped auxiliary ports at the rear of each cylinder. These cut-outs allied to corresponding windows in the rear of the pistons transformed the engine’s characteristics. The new porting facilitated enhanced gas flow within the motor, delivered a significant boosting effect to the ejection of combustion gases, cooled the pistons’ crowns and cylinder head thereby gaining better efficiencies.

From this point on Yamaha’s 350s were machines to be respected not sneered at. Often forgotten now but in 1969 Yamaha’s UK agent, Mitsui Machinery, didn’t have a machine bigger than the YR3 in its line-up and probably didn’t need one such was the potency of the bike. Certainly Yamaha sales in the UK didn’t suffer because of it. For 1970 Mitsui could have imported the new XS-1 650 four-stroke twin but chose not to and carried on with the new YR5. Proof positive that biggest isn’t always best!

Chassis wise the YR3 runs a fairly conventional set up which delivers confidence inspiring handling at a point in time when some of its peers were still bouncing around between the hedgerows. Yamaha went on to make much of the later RD350 and its connections with both the GP and production racers. However, the YR3 and its older brother also have more than a touch of track magic to them. More than one expert has looked at the frame and spotted subtle Norton featherbed influences behind the bodywork. It might not handle like a Bracebridge Street bike but it’s far better than you might initially credit.

All of this would be fine and dandy but it can all go horribly wrong if the brakes aren’t up to muster. Fortunately Yamaha was well on the case, fitting a genuine class leading TLS front anchor that happily punches well above its weight. Strong and predictable, it’s only phased by protracted and prolonged high speed braking. Given the strong chassis this is not something most owners are ever going to find necessary.

With the advent of the modern classic scene there’s been something of an influx of period imported Jap iron back to Blighty and this has led to two subtly differing styles of YR3 coming up for sale. UK/European examples generally run black fork and shock covers along with side panels. The black is also carried over on to the lower portion of the tank with the upper 80% finished in candy blue or candy red. USA imports are one colour all over with no black paintwork and come in either candy green or red. Rarest of all the YR3 variants is the YR3C. Almost certainly a USA exclusive model, its braced bars and raised exhausts marked a high tide mark for the concept of street scramblers.

If you were looking for a Japanese performance stroker from the golden period you could do a lot worse than a YR3; lively entertaining performance, quality running gear, simple robust electrics and excellent brakes.

Strangely it’s not a bike that many people have bothered with as it’s unfairly eclipsed by the later YR5 but we reckon that’s a mistake. Its slightly over square cylinders and meaty crank deliver a stream of usable power that makes the later machine feel like a rev happy tiddler. Yamaha YR3? Quite possibly the best period stroker you’ve never considered buying.

What to buy and how much to pay
Authentic and original is always best, but in reality a good complete one is always favourite. For some reason half completed restos often turn up. The YR3s understated good looks are often passed up for something more glitzy.

If the engine’s sorted it’s definitely worth having. Some parts go for silly money such as the tank badges or the tyre pump. Reproductions of the former are available and if you need a tyre pump that bad steal one off the kid’s bike.

The USA candy green models are a little OTT in our opinion and so we’d look to buy a good UK or European example; both the blue and green options look equally attractive.
If you insist on buying a project go no more that £750-1000, a tidy rider tops out at £2500-3000 and a perfect original or mint resto is unlikely to be more than £5500. We’ve recently seen an original mint USA YR3 for sale in Australia fail to make £6000.

The few that turn up at specialists bike traders are generally overpriced simply because they view rare as an excuse to bump up the price but chances are the YR3 will get passed over for something a little newer. We’d reckon on making a cheeky offer and watch the dealer ruminate over your offer. He’s keen to sell and you might just get one of the classic scene’s best 350s.