My associations with Vincent engines have taught me several things. There seem to be more working parts in a Vincent than any other bike rye ever seen inside. The design of various aspects of the engine are as advanced as anything being used today. There are other areas where the engineering of today can usefully be applied to correct any misalignments which either existed at the time of making or have crept in over the years.

The cylinder head is one element of the engine which can usefully be brought up to date. Lots of people profess to be Vincent specialists, I am not to be numbered amongst them. Maughan and Sons at Wilsford near Grantham have more than their fair share of Vincent expertise and as many brand spanking new machine tools as you are likely to see outside of an exhibition. They showed the way they treat every head which passes through their hands and in nigh on thirty years of fixing Vinnies that's been quite a few.

Vincents are renowned
People normally take the head off because something's gone wrong. Vincents are renowned for doing in their exhaust port threads. The reasons are many and varied but one factor which helps the thread towards its fateful end are the exhaust pipe flanged nuts (ET 84 is the part number). It was found that many of the ones being sold and fitted to the aftermarket exhaust systems which are available for the Vincent today had threads which, in some cases, were 0.015 inches below the correct size. Screw a nut like that into an old thread and the chances are you'll either cross the thread in the head or pull it out altogether. Maughans sorted that problem out in the same way they sort out most others — they make their own fully machined exhaust pipe nuts. The thread is cut with a single point chaser and the size is controlled to very close tolerances. In the event of a head needing a repair to the exhaust port thread, or to any of the other threaded areas, they are able to effect the best job you could wish to set eyes on. 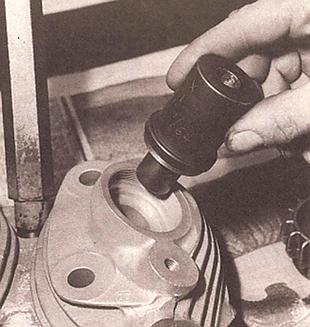 Exhaust port threads can either be machined oversize and an aluminium bronze insert fitted or else the old thread can be cut out, the whole area specially cleaned and then using a special high tensile alloy filler rod the port area is welded, by the TIG (argon) method. The thread is then re-cut to the correct size. Tony Maughan scoffs at people who try to spot a bit of weld into the thread and then sort it out with a tap.

As part of the exhaust port reclamation, the compression joint face and the step which locates with the cylinder liner are skimmed.There are two reasons for this. Firstly, any distortion of the head itself is removed, and secondly the result of all the lapping in with coarse grinding paste which people are wont to do can be seen in the form of rough scars on the sealing faces. The bare minimum is removed at this operation.

A Vincent uses the engine as a structural member of the whole bike. As such the accuracy to which the engine is machined is critical. It is quite often found essential to re-spotface the top surface of the head which locates the head clamping nuts. The reason is simple. If the head is not of even thickness at this point then when assembled with the upper engine mounting that mounting may not be square to the axis of the engine. The result would be to try to bias the steering head to one side. It is just as important to ensure that the head clamping nuts are all of the same thickness. Maughans make their own, specially toleranced from high tensile stainless steel. The washers which fit beneath those nuts are also specially selected for thickness.

Quite unusual
In mentioning the threads in the head we got close to the business area. The Vincent is quite unusual in the way it chooses to open its valves. Most engines push their valves open from the ends; there may be a rocker arm or a tappet and cam above the valve to open it at the desired moment, but not on the Vincent. The valve is opened by a rocker arm which is forked and which operates the valve between two valve guides, so the valve is opened by pushing it about its middle. The result is that the action of opening the valve is far less prone to pushing the valve over to one side or the other, which would be the case if it were opened from the end. The design thus has two valve guides, one above the rocker arm and one below. The valve has two bearing diameters and a further fitting diameter which accommodates the hardened steel collar on which the rocker arm acts.

The upper valve guide locates in an accurate non-wearing datum diameter in the head. This diameter is the one which Maughan and Sons use to correct all the errors in the alignment of the valve guides and the valve seats. They have special tooling which, locating in the upper guide fitting diameter, allows the lower guide hole to be machined oversize to accept one of their standard oversize guides. They make them from aluminium bronze DTD 197 A in a whole series of oversizes, working upwards in 0.015 inch increments. 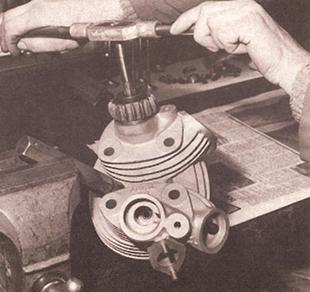 Whilst making the guides they also take care of an anomaly which besets Vincent owners who try to go faster by fitting race cams. Those cams have more lift than standard and so the good old Vincent tuning guide said you should machine a sixtyfourth off the top of the guide to allow the rocker arm sufficient movement with the extra lift No need for this with the Maughan guides. They have shortened the top of the guide by the required amount. What they also do is to stick that amount onto the bottom of the guide so that the original design length of lower guide is not lost by accommodating the higher lift cams. They don't finish the bores of their guides on the lathe. Instead, they are left a few thousandths of an inch undersize, and the finishing is done with a special set of piloted line reamers which locate in the upper guide and size the lower guide to give the desired running clearance.

The seats are also machined true to the upper guide datum. In most cases the seats have to be replaced. They make their seats from aluminium bronze to the required size to have an interference fit into the seat housings. The seat housings can be reclaimed by boring oversize if needed or by welding or reboring if they are already well over standard size.

Grinding equipment
After the head has cooled the special pilots for the valve seat grinding equipment are installed. These lock into the valve guide which has been correctly positioned relative to the upper guide datum, a series of grinding stones are then very lightly applied to the valve seat, being guided by the central spigot which is locked into the guide's bore. The process, being a grinding operation, is a very low force one. This results in minimal misalignment of the seat face. Final lapping in, the bare minimum being needed, ensures that the upper and lower guides and the valve seat are all perfectly orientated one to the others.

The lower guide on a Vincent is held in place with a screwed lockring The lockring threads have been known to strip. This is no problem as special tooling is made up to tap them out oversize where needed and also when they are at the maximum size they can be welded up and then recut to standard proportions. Spark plug holes can be reclaimed by Helicoil s if needed, so pulled threads are no worry.

The other area where a Vincent head is subject to wear is in the rocker tunnels. As their name implies they are circular housings which hold the rocker bearings. These bearings are a fairly complex machined item, and they rely for accuracy on the rocker pin hole, the one which suits the ET 28 pin, being accurately sized and square to the outside diameter. This, with today's 'that's near enough' attitude prevalent outside of the Maughan works, meant that those available were designated as sub-standard and they make their own. In fact they buy very few components from outside and those which they do, such as valves, are manufactured to the exacting standards set down by Tony Maughan who believes that quality comes next to nothing. 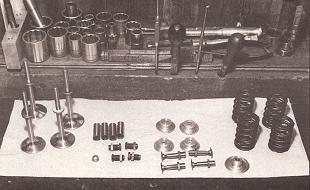 They use a special method of securing the rocker bearing into the tunnel. The captive rocker bearing system, ET 100 modification, is a demon tweak which pulls the rocker bearing in one direction, the same direction as all the force which the valve spring is causing. The bearing is thus locked into position by the oil feed bolt which doubles as a locking bolt and an oil feeder for the rocker assembly. The bolt and the small special shaped nut have to be made from super high tensile steeL Maughans make theirs from the best available. It is essential to modify the rocker arm itself to miss the nut, but this only takes a few moments as, surprisingly, the Vincent rocker arms are not hardened. They are made from KE805 hot drop stamped.

Just a final word on the way they finish off their heads. They do a bead blasting operation on the bare head. This follows a chemical cleaning tank which is used if the head is particularly dirty or is painted. The blasting is done when the head is bare to ensure that none of the beads get trapped in some important component. The subsequent hot fitting processes for the seats and the guides, as well as the normal good housekeeping and clean working procedures laid down at their works ensures that when finished the heads not only look better than new they are actually more accurate.