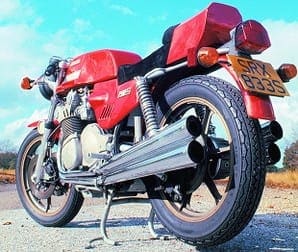 Based on a 600cc shaft-drive tourer first offered in 1965, the bigger 750S and Monza suffered from excess weight. They certainly had charisma, with a double overhead camshaft engine that was designed expensively for durability using rolling-element bearings.

With open Dell’Orto carburettors it sounded wonderful and matched the garish style of the red, white and blue paintwork: the 750S was no shrinking violet.

The 750S of 1974 was the best of its type with a 123 mph top speed that made it fastest in the class at the time. This was followed by the 790cc America but the most potent MV was the 790cc Monza with more up-to-date styling and power enough to reach more than 140 mph.

But it was still a unwieldy beast that could be bettered on the road by less expensive Japanese hardware.

Rarity makes any tidy MV Agusta of the era a collector’s piece.

29 Kawasaki Z1300, 1979
When Kawasaki found it necessary to offer a heavyweight for touring duty, its aircooled dohc fours weren’t up to the job.

But instead of taking Honda’s route with the Gold Wing, Kawasaki stayed true to the faith with an in-line across the frame engine using shaft drive.

Except that the Z1300 wasn’t a four but a watercooled six, with an engine of such complexity that it made Honda’s sporty CBX look simple by comparison.

Weighing in at nearly 700 lb, the 120 bhp behemoth boasted an engine with such pulling power that it’s hard to imagine what Kawasaki expected the bike to be equipped with, short of a small house.

In original unfaired form it’s probable that the Z1300 was capable of slightly more than 140 mph but it’s academic.

The bike was one of those ‘corporate statements’ that the Japanese factories offered that just turned out to be one of the most potent virility symbols ever made on two wheels. 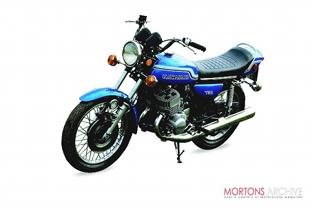 28 Kawasaki 750 H2, 1973
For mind-numbing motorcycling hedonism there wasn’t much to beat Kawasaki’s two stroke triples. They started with the phenomenal 500cc Mach III launched in 1969 which offered a scary combination of rocket-like acceleration and wayward handling.

So when the bigger 750cc H2 was revealed three years later everyone expected to even more unmanageable.

For looks alone it was a stunner, the three cylinder engine and its asymmetrical exhaust dominating the visual assault. But although the engine developed a claimed 74 bhp at 6500 rpm it was more flexible than the 500, and virtually house-trained by comparison.

Sure it rattled and the exhaust note turned heads, but the 750 was more bark than bite. Its strong mid range made it an easy ride and, better still, easy to wheelie. A careful throttle hand was needed. Likewise if you wanted to keep the fuel consumption above 40 mpg. Top speed? 115 mph. Quarter mile acceleration? 13.3s.

27 Honda Gold Wing, 1975
When launched at the Cologne Show at the end of 1974, the Honda Gold Wing emerged to a mystified motorcycle world. The huge watercooled flat four tourer went against everything that the-then trends had dictated: sporty looks, more power, less weight.

Its car-style ohc engine was creamy smooth and with 80 bhp on tap could whisk its rider up to 125 mph flat out. But with an all-up weight of nearly 580 pounds and limited cornering clearance it was no scratcher.

But the pundits had got the Gold Wing all wrong and when the accessory manufacturers started offering full touring kits for eager US riders its true destiny became obvious.

Like the Harley-Davidson Electra Glide, the Gold Wing was a heavyweight tourer with stamina enough to lug piles of equipment and a passenger all day long, just as thousands of happy Wing Nuts still testify 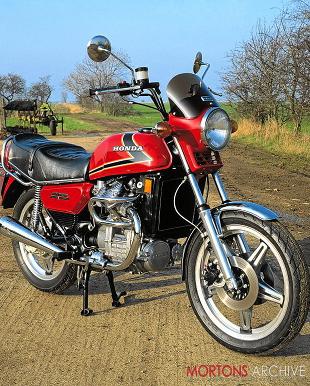 26 Honda CX500, 1978
Love it or hate it, the CX500 must get a mention in the Top 40. When launched in 1978 it was a dramatic departure from Honda’s accepted technology: an across-the-frame vee-twin with shaft drive, Moto Guzzi style.

But that was as far as the similarities went. The CX500 used water cooling, four valves per cylinder and a side-mounted five speed gearbox to shorten the engine and enable the swingarm to be longer.

This curbed the lurching normally found with shaft drive bikes but the CX500 – one of the first Hondas designed with compactness for agility – was top heavy with none of a Guzzi’s stability during cornering.

Neither was the bike fast, offering a flat out 110 mph and a quarter mile in 14.5 seconds. But it could cruise all day at 90 mph.

After some initial problems with camshaft drive chains the CX500 became the epitome of durability as the courier riders’ favourite mount, despite its weird looks.

25 Honda CB750F2, 1977
Really keen competition between the Japanese factories started towards the end of the Seventies when Suzuki launched its first four stroke, the GS750 dohc four and threw down the gauntlet to Honda, which had already restyled its CB750.

In 1977 Honda went one better and updated the looks and power with the CB750F2.

It did the trick, the Honda beating the Suzuki with a top speed of nearly 125 mph. But the slightly heavier Honda, at 515 lb, wasn’t quite as quick off the mark with a standing quarter of 13.6 seconds. Neither was its handling as well refined. That would come with the following year’s dohc 16-valve fours.

24 Honda CB550F, 1976
Following the success of Honda’s CB400F in 1975, the factory cashed in and restyled its bigger 500cc four first launched in 1971 with similar sporty styling having a four-into-one exhaust system, abbreviated panels and a simple colour scheme.

The engine also came in for a revamp with an increase in capacity to 544cc (58.5 x 50.6mm) to boost the torque while maintaining peak power of 50 bhp.

The expectation was that it would be much quicker than its smaller sibling.

In fact the CB550F was softer and more flexible, offering relaxed handling and performance.

Weighing a claimed 423 lb, the ohc four was refined and economical, offering an overall 50 mpg.

23 Yamaha SR500, 1978
Traditional road bike design values of simplicity, light weight and economy weren’t of much interest to the Japanese factories in machines bigger than 250cc until they’d filled all the gaps in their ranges. But Yamaha’s XT500 trail bike contained the basis of what has turned out to be the original retro machine, a unit construction 498cc (87 x 84mm) overhead camshaft four stroke single.

It powered the SR500 road bike which had everything the long-in-tooth rider wanted – lusty throttle response, kick starting, a trim 360 lb kerb weight and a gutsy exhaust note – with reliability and oil tightness. Though it wasn’t popular in the UK, it was a hit in Japan (and still is). But it had faithful following who loved its lazy performance (though not its vibration at speed) and frugal 70 mpg fuel consumption.

Given its head, it could reach 97 mph and acceleration wasn’t bad either: 15.55s through the quarter mile, about the same as the sporty RD250 two stroke twin. 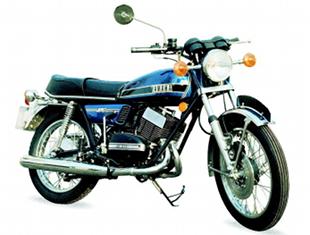 22 Yamaha RD250, 1973
Yamaha had been producing aircooled two stroke 250cc twins from the early Sixties but it wasn’t until the Seventies that they evolved into more durable machines that offered real performance. The RD series – said to be short for Race Developed – came with a mini duplex frame, quality suspension and a potent disc brake. But the key was a new engine featuring reed-valve inlet porting for the first time.

It meant that while the 247cc (54 x 54mm) parallel twin could pump out a claimed 30 bhp at 7500 rpm it had stronger mid range and better throttle response, making it as much the learner bike of choice as a basis for production racing (it later won the Isle of Man 250cc production TT). As with any self respecting lightweight it came with pump lubrication for the engine and quality controls and instruments. With a top speed of almost 94 mph the RD250 wasn’t the fastest in class but its acceleration through the quarter mile (15.55s) was, and that made it the bike to beat.

21 Laverda 500 Montjuic
Once the Italian factories had established themselves as manufacturers of high-quality heavyweight sports bikes they set about offering smaller but no less sophisticated middleweights. Laverda’s 500cc Montjuic twin was one of the earliest and one of the best, augmenting the Breganze factory’s beefy 750cc twins and 980cc triples.

Developed from the more restrained Alpino, it came with a modern eight-valve dohc parallel twin engine with a 180-degree crankshaft and six gearbox speeds.

Styling was dramatic and it broke the classic Laverda mould by providing nimble yet stable handling born of high-quality suspension. The Montjuic may not have been the fastest 500 on the market – though it did have more mid range than most.

But what sheer, bad mannered fun.

The engine, developed into 700cc form in later years, became the longest-lived of the brand.