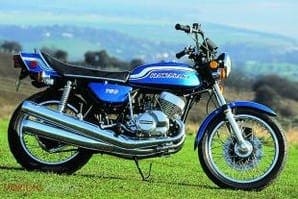 10 1972 Kawasaki H2 750
All the vices and perverse virtues of its Mach III forerunner in 750cc form. Although no faster than the Mach III 500, it was a shade quicker over the standing-quarter and the difference was enough for it to claim the title of the fastest accelerating production bike of its day.

There were four versions. The original 1972 model was followed by the 1973 H2A, 1974 H2B and 1975 H2C. Significant chassis changes in 1974 didn’t improve the handling that much and a bid to smother the motor’s considerable high rpm vibration was inexplicably abandoned after the appearance of only a handful of ’74 machines with rubber cushioning in the engine mounts.

As with the 500, each of the 750 models was slightly less powerful than its predecessor. However, unlike the 500, they are all highly rated and many consider the 112 mph ‘long tank’ H2C the pick of the bunch on looks alone.

9 1976 Yamaha RD400
The RD400  is arguably the best aircooled twin cylinder two stroke ever. It’s certainly the most fun – a lithe, wheelie-popping, six-speed giant-killer that could run rings round much bigger capacity bikes. With a little light tuning it became a rocketship.

In terms of historical significance, the YR5 and RD350 should take precedence, but the extra capacity squeezed from the RD350’s reed-valve  motor gave the 400 more punch and increased the smile factor.

The last of the RD400s was the 1979 400F Daytona Special – an American-market model that employed air valves in the exhaust to help meet EPA emission regulations. Although never sold in Britain, the Daytona’s superb styling is reason enough to track one down. 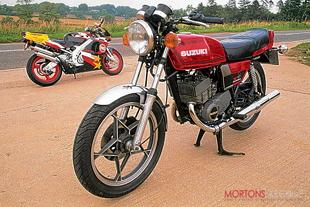 8 1978 Suzuki X7
Forget all those vastly optimistic speedo readings, the X7 was the first 250 road bike to clock a genuine 100 mph in independent press tests. For that reason, and that reason alone, it merits its place in this line-up.

Personally, I feel the X7 is overrated. True, tuners could extract even more highly impressive performance figures from the machine but in real road riding conditions it was a different story.

One of the secrets of its success was its low weight. Faced with a strong headwind, an uphill gradient or a heavier than average rider, the 30 bhp motor struggled.

It was also more fragile than the Yamaha RD250 and although a star of its era its status has waned to the extent that some basket-cases can be picked up for peanuts. They make good Earlystock racers, though.

The appearance of the 105 mph 250 was one of the reasons the UK learner law was changed to a 12 bhp 125cc restriction – but it was good while it lasted.

The 250 was almost as fast as the 350 but the bigger bike pulled from lower revs and had a second front disc brake.

Elsies were so sought after they became the top choice of bike thieves as well as buyers. Breakers’ yards soon became full of crashed examples too. They were that kind of motorcycle – as sensible as a dog with rabies.

The handling was good on well surfaced roads but they became bucking broncos when ridden hard and fast on poorly surfaced backroads. Pre-loading the fork springs with inch-long spacers, using a heavier grade fork oil and fitting a steering damper was the recommendation of the day.

Old boys in cloth caps would point to the fact that the cantilever frame was similar in principle to the rear-end arrangement HRD-Vincent had pioneered in 1928 and that watercooled Scotts had been around since 1910.

Okay, so nothing is new, but Elsies made the competition look like dinosaurs and there is timeless quality to the superb styling that would not look out of place in a modern showroom.

6 1983 Yamaha RD350 YPVS
Despite the success of the 350LC, an extensively revamped successor went on sale in 1983. The mods were many. The LC2 had an all new perimeter frame, monoshock  rear suspension, air forks, new styling and a stronger engine with YPVS.

The initials stood for Yamaha Power Valve System, a device for varying exhaust port timing to spread and extend the powerband. Result: a 120 mph Elsie with more bottom end punch.

Perfect. Well, it would have been if the addition of a handlebar fairing and heavy clocks had not messed up the machine’s high-speed stability.

That was cured in 1985 with the launch of two variations – the fully faired RD350F1 and the naked RD350N. Final version sold in the UK was the made-in-Brazil RD350R which was available from 1992 to 1995. The original LC has a bigger cult following but the YPVS is also a gem in its own right. 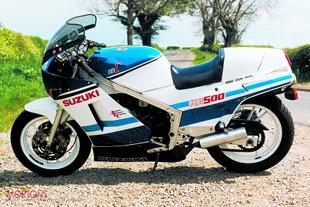 5 1985 Suzuki RG500 Gamma
The ultimate 500cc GP replica with more than a passing resemblance to the works racer on which Barry Sheene won the world championship in 1976 and 1977.

The 95 bhp square-four motor was as powerful as the first full race version Suzuki unveiled in 1974, so who the hell cared that you were lucky to see more than 25 mpg?

Test bikes given out to the bike press were clocked at 150 mph and were hitting more than 120 mph at the end of an 11-second standing quarter. The Yamaha V4 RD500LC unveiled a few months earlier was hard pushed to top 135 mph. End of contest.

The RG500 handled well too. A rigid box-section alloy frame, good suspension and low centre of gravity saw to that. Production ceased in 1989 and good ’uns are hard to find and expensive.

4 1985 Honda NS400R
Two strokes have never been Honda’s thing. The V3 two stroke on which Freddie Spencer won the 1983 500cc world championship was a face-saving exercise produced to eradicate the ignominy of their disastrous attempts to take the title with their hopelessly outclassed NR500 four stroke.

Honda responded to pressure to produce a road ‘replica’ of the Spencer V3 but watered down the cocktail. The cylinder layout was different and the capacity dropped below the 400 promise carried on the bodywork.

Although no performance match for the Suzuki RG500, it was still an amazing motorcycle which was light and easy to flick about and handled as though stuck to those proverbial rails. One  can only wonder how good a full-blooded 500cc version would have been if Honda had put their heart into it. 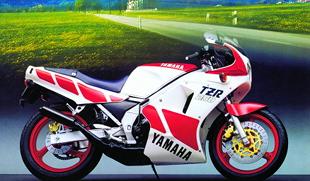 3 1987 Yamaha TZR250
Replacement for the good old RD250LC which went to its grave a year earlier. The 120 mph newcomer stole top billing from the RG250 Suzuki – another machine well worth a place in the history books – and held it until arrival of the KR-1 Kawasaki and RGV Suzuki.

Not as cramped to ride or as extreme as these later projectiles, but an excellent sports bike that could cope with a pillion passenger.

A 350 version of this or the later V-twin TZR250R would have answered many prayers.

2 1990 Kawasaki KR-1S
Kawasaki swept the opposition away on both road and track with their 1989 KR-1. The super lightweight twin was a scratcher’s delight. A year later the factory went one better with the KR-1S.

Don’t bother if you are a six-footer weighing much more than 11 stone. The bike is tiny, the riding position cramped and uncomfortable. However, this is the perfect plaything for would-be Kork Ballingtons on Summer Sundays.

Good examples are a real rarity. They disappeared from UK sale in 1993 and most are long gone to that great race track in the sky. 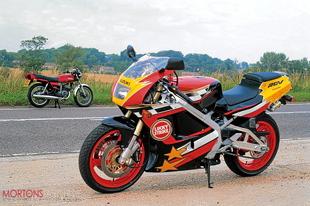 Aprilia’s RS250 – the last out-and-out two stroke sports bike – was powered by a 60 bhp version of the RGV’s 90-degree V-twin motor. The first RGV appeared in 1987 and found its way to the UK in 1988/89. Performance and handling were impressive. Reliability wasn’t. Reports of broken exhaust valves and piston seizures suggested the motorcycle carry the  kind of health warning they print on fag packets. Those problems were eradicated by improvements introduced in 1990. These and the later versions are the ones to go for. They’ve also got a few more bhp. As with the KR-1S Kawasaki, only smaller riders are going to be at home on this machine, which feels like it was born in a grand prix paddock.