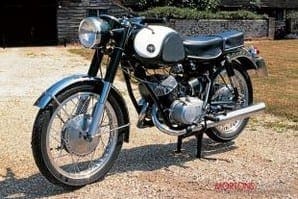 20 1959 Yamaha YDS1
The grand-daddy of them all – Yamaha and Japan’s first out-and-out 250cc two stroke sports road bike. Its impact on the road was mirrored on the track.

Yamaha’s over-the-counter twins have been the mainstay of 250cc and 350cc road racing for nearly 40 years and they all go back to the competition version of this machine.

Its launch in 1959 means we have to stretch the calendar of this review a little, but the omission of such a milestone in motorcycling’s history would be unforgivable. Few of the original twin-carb 20 bhp twins were sold outside Japan and imports to the UK didn’t begin until 1962 and the arrival of the YDS2 (pictured), by which time the five-speeder had gained another five bhp and a twin-leading-shoe front brake.

A further four models followed in the series before giving way to the RD range which hit our streets in 1972. 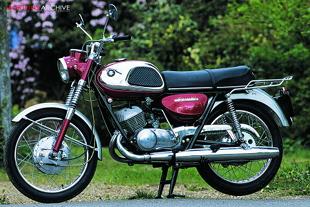 19 1965 Suzuki T20 ‘Super Six’
Suzuki’s first 250cc sports bike went straight to the top of the class. A complete departure from the earlier T10, the newcomer went on UK sale in 1966 and became, that season, the first Japanese motorcycle to win the Motor Cycle News Machine of the Year poll.

The ‘Super Six’ tag derived from the number of cogs squeezed into the close ratio gearbox. The T10’s electric starter was ruled surplus to requirements and a new tubular steel cradle frame took over from the pressed steel sheeting.

Rumours that the Super Six was the first 100 mph 250 road bike are not true but its genuine top speed of between 90 and 95 mph and good handling combined to make British 250s of the period look hopelessly inadequate.

The machine’s reliability and quality of finish were also top notch. Both the T20 and the Hustler that soon replaced it are far more collectable than any of Suzuki’s later aircooled 250cc twins.

18 1966 Kawasaki A1 Samurai
The Samurai is the foundation on which Kawasaki’s reputation in the performance world is built. Few bikers in Britain knew how to pronounce Kawasaki until the Samurai arrived on the scene.

The A1 was the first twin cylinder road bike with rotary valve induction and testers praised both the handling and brakes. When Motorcycle Mechanics – the forerunner of this mag – got their hands on one in 1967 they claimed that it would out-accelerate a 650.

They also came oh-so-close to breaking through that 100 mph barrier with a best speed run of 99 mph. A big-bore 42 bhp 350 version called the Avenger was launched in 1967. It was well-received too. High prices and a lacklustre UK distribution network denied both twins the UK sales success they deserved. 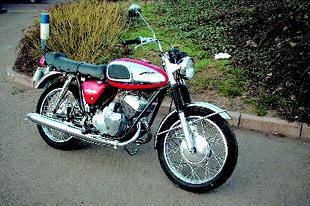 17 1967 Bridgestone 350 GTR
Bridgestone produced a highly-acclaimed range of two strokes before pulling the plug on motorcycle production to concentrate on their flourishing tyre business. Shame. Of the many Japanese motorcycle manufacturers who fell by the wayside, Bridgestone are the most mourned.

Star of their range was the 350 GTR, unveiled in 1967 and joined in 1970 by a high-pipe street scrambler alternative called the GTO. The GTR was a sophisticated 103 mph machine with a disc valve engine, six-speed gearbox and 12 volt electrics.

Although an all-rounder, it was faster than Yamaha’s better known YR5 and the build quality was up there with the very best. TT winner Bill Smith was the factory’s UK importer from 1967 to 1969 but pulled out when faced with unacceptably high price rises. Bridgestone, who began bike production in 1952, called it quits themselves in 1971.

Only 30 or so GTRs were sold in the UK. Most of those are long gone but collectors have brought in examples from the US. One for the connoisseur.

16 1968 Suzuki T500 Cobra
Vastly underrated motorcycle powered by one of the most durable two stroke motorcycle engines of all time. Ironically, although the motor is as tough as old boots even good examples sound like they are running a broken crank and cracked pistons.

The Cobra began life as Suzuki’s top sports bike and ended its days as an economy all-rounder in the guise of the GT500B. Needless to say, the original and much faster Cobra is the one to go for unless you are simply looking for cheap transport. The T500 was Suzuki’s succinct answer to sceptics who believed the new breed of Japanese performance two strokes would never make inroads into the larger capacity classes. The Cobra led the way.

All Suzuki got wrong was their timing. Had it been launched a few years earlier it would have been a sensation but its arrival was overshadowed by the first wave of four stroke 750 superbikes. 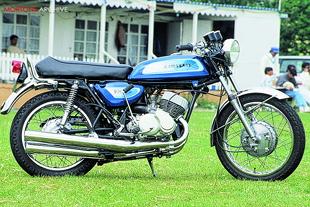 15 1969 Kawasaki Mach III 500
Insanity rules, okay! The Mach III was aimed at American buyers and blistering acceleration was the priority. The 500 Kawasaki could cover the standing-quarter in about 12.5 seconds – that’s all that mattered.

The brakes were poor, the handling was terrible, a short 51.6in wheelbase and rear weight bias meant wheelies were unavoidable and fuel consumption could slump below 20 mpg. Far too extreme for most tastes, it found favour with those who removed their brain when they put on their helmet.

Only 20-odd were sold in the UK in 1969 and they had to be recalled and fitted with points ignition when their CDI system was found to play havoc with television reception. Subsequent models in 500-3 range were tamed little by little over the next eight years ending with the 50 bhp KH500, an easier motorcycle to ride but one drained of the original’s wayward appeal.

14 1972 Yamaha RD250
The eapon of choice for British learners of the Seventies who wanted performance. RD stood for Race Developed and the RD250 made the teenager with a provisional licence feel like a world champion.

The range kicked off with the RD250A. Its big advantage over the YDS7 it replaced was the use of reed valve induction. A front disc brake was also standard on the UK model, though earlier versions had a drum.

The first machines sold in Britain were rigged to prevent use of the sixth cog in the gearbox following reports that it was possible to accidentally change from top to first. The problem – if there was one – was soon sorted.

A variety of improvements  followed over the next seven years. The one to go for is the one you (or your dad) had (or wanted) when 17.

13 1972 Yamaha FSIE
Not all mopeds have shopping baskets. The legendary Fizzie is the little stick of dynamite that made the ‘Sixteener Moped’ law a bearable experience for a generation of thrash ’em and crash ’em young hooligans.

The Fizzie was a tough little critter that could cope remarkably well with all the abuse it had to suffer. Their true performance is the subject of gross exaggeration but FS1E and the AP50 Suzuki were the leaders of the pack and the Yamaha had more kudos.

Introduction of the 30 mph restriction in August 1977 curbed performance but the Fizzie still looked the part and that was the name of the game in the school playground  or parked up outside the local chip shop. 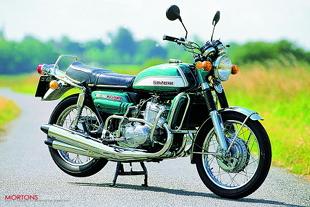 12 1972 Suzuki GT750
What’s the ‘Kettle’ doing in this list of sports two strokes? The watercooled triple is a big heavy tourer true, but there is enormous power to be unleashed from that softly tuned 67 bhp engine.

Next problem, the handling. Not as bad as people make out but aftermarket frames were available from the likes of companies such as Dresda and Nico Bakker for those with big ambitions and wallets.

Six versions of the GT750 were produced. The 1976 A model was the best seller in Britain, the original drum-braked J version is the most collectable.

11 1972 Kawasaki S1
Not to be confused with the anaemic KH250 that followed in 1976. Devotees insist that the S1 would have been the first genuine 100 mph 250 if Kawasaki had got the gearing right. Collector Dave Howard says two extra teeth on the standard gearbox sprocket will deliver the goods.

Unlike Kawasaki’s 500 and 750 triples, the S1 actually handles and stops. Only 300 or so of the original 1972 model were sold in the UK and parts are hard to come by, making restoration a real headache.

Beware of lookalikes using engine components from the later detuned models or you will end up with a lookalike without the punch.