1915
New vehicle lighting orders for the London Metropolitan Police District. For some time, faster vehicles (including motorcycles) have been required to carry a working red rear light or rear lights as appropriate, but slow vehicles including cycles, hand carts and horse drawn vehicles have been exempt. Now all classes of road vehicles must carry and use such lights. Provincial cities may soon follow suit.

1940
EMI, the maker of Rudge motorcycles, has launched a 98cc Villiers Junior De-Luxe powered single speed autocycle. Its design follows the familiar Jones concept employed by rival makers. On offer are the Standard and the De Luxe model priced at £22 and £22-15s respectively.

Footnote: EMI soon closed the motorcycle assembly lines and autocycle production was licensed to Norman Cycle Ltd of Ashford, Kent. In total, the Rudge autocycle was in production for little more than a year.

1965
BSA ruled at the annual Victory Trial staged near Knighton with Scott Ellis (249cc, shown above) overall victor of the solo competition and Arthur Pulman (343cc) taking the sidecar cup. And BSA didn’t stop there, as it scooped the Best Manufacturer’s award represented by Ellis, Jim Sandiford and Dave Langston and BSAs were ridden by the winning club team, Birmingham – Dave Langston, Jeff Smith and Brian Martin.

Clerk of the course Olga Kevelos, a renowned national and international trials rider, stated before the start that her course was so tough no rider would lose less than 30 marks. All leading top riders bettered this prediction.

Traditionally, snow makes for tough going in the Victory, but this year there was just a dusting of the white stuff and instead ample helpings of mud, tree roots and greasy gullies served to sort out the results table. Tough sections included the seven sub-section Creignant, a deep dark canyon with edge on slate, a stream bed and a muddy steep exit to snatch marks from all. And just when the leaders, including Derek Adsett and Peter Gaunt convinced themselves the cup was theirs marks were robbed at Pant Hill, Cwm-a-Dee, Litton and Cwm Whitton.

1990
Such is the popularity of the annual National Rally that the organisers, the ACU, has just announced it is limiting entries to 1200. The Union has advised there will be 50 checkpoints dotted across England and, regardless of the class of award entered, the Rally finishes at Donington on Sunday morning after up to 500 miles and 20 hours on the road. 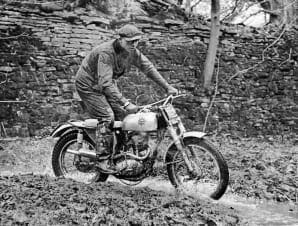