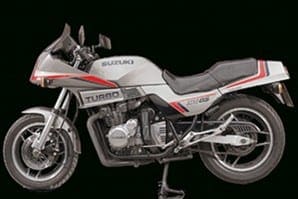 The strange rush to produce turbo equipped motorcycles at the start of the 1980s was a brief dalliance with a concept that looked like it offered something for nothing or very close to it. Suzuki’s considered suggestion was the XN85 and although it was never a huge seller (allegedly less than 1200 worldwide) it ran several firsts for the company and is arguably perhaps the best looking of the genre.

In the Japanese motorcycling world you’ll notice a strong presence of me-too marketing and semi-doppelganger models. What one company does another generally follows if not blindly then certainly in the same overall direction. Suzuki’s XN85 raison d’être might have had a generally similar sales spin to its predecessors – Honda CX500TC Turbo and the Yamaha XJ650LJ Turbo – but its focus was intrinsically different. Whereas the Honda and Yamaha were pitched as high-tech sports tourers, Suzuki’s turbo was destined from day one to be an out-and-out sports machine.

Even now the bike looks remarkably fresh and edgy, due in no small part to its strong Katana-esque styling. That stepped seat, half fairing which showed off the engine, swooping tank-side panel-tail piece combo,

and the strangely palatable medley of curves and angles made the bike instantly recognisable. With Katanas now very much the in thing, an XN85 now looks retro trendy but at the time its appearance polarised opinion like little else.

Combine radical lines with a radical engine and potentially you have a recipe for sales flop. Now come up with a price tag aimed at confirming to your potential customers they were getting something exclusive and you have the makings of a disaster. Compound the felony by bringing out a normal bigger engined, conventionally styled machine, a few months later at a sensible price and then it’s little wonder sales demand was so low.

This writer recalls a small local dealership that had franchises for MZ, Honda and Suzuki. Somehow the Suzuki rep persuaded the shop to take on a Suzuki turbo. Two years on, it was still in the showroom pushed ignominiously to the back behind serried ranks of Eastern European TS125 and 150s. Such was the fate of many XN85s and a fair proportion of the model run were latterly sold off at substantially lower prices simply to free up space and recoup some outlay.

All of which is actually desp 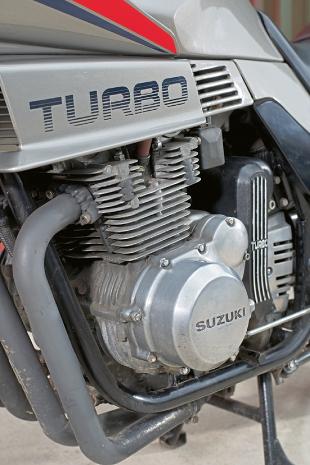 erately unfair, as the bike is a whole lot better than its period reputation suggests. Okay so it’s no rip-snorting beast as perhaps Suzuki was just a little worried about product liability issues. However, beyond 5000rpm it gets going properly and pulls but we’re only talking about a low level of boost here assisting 672cc. Where the XN excels is handling and for what was effectively a flagship model Suzuki put in a substantial effort.

Aping then current race bike technology the bike was fitted with a 16in front wheel, the first production bike to run such a radically small hoop. And the back end was tricked out as well. Suzuki chose this bike to launch its Full Floater rear suspension system with its single shock absorber.

Chuck in overtly rear set footrests along with low clip-on bars and this was proper sportsbike territory. Well it would have been if the bike had been a full fat, turbo nutter, total animal but it wasn’t. The numbers in its name indicated the quoted power output said to be 85bhp but in reality probably some 15 ponies short of the truth. Add in the styling, price, so-so performance and the fact that in day-to-day use the company’s GSX750ESD generally aced it.

What does come over strongly, both then and now, is the XN’s most outstanding attribute, amazing handling. For the period few mass produced Japanese machines were as good or better. Period road testers could actually deck an outer exhaust pipe in a corner… not that you’d want to risk that now.

If you fancy a bit of 1980s techno with class leading handling and own a machine that’s unequivocally more than a little out of left field, Suzuki’s one and only turbo motorcycle could be the bike you’ve been looking for. Fifteen years ago the value of an XN85 was at rock bottom but they’ve slowly been creeping up. They’re still significantly cheaper than most of their peer group so now is as good a time as any to sample one of the rarest Suzukis out there.