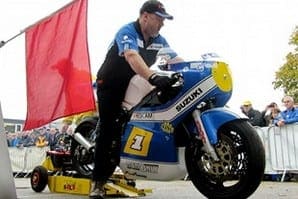 Like last month’s Kawasaki ZX-9R, the Suzuki RF900 was a stop-gap machine which had the right capacity to lure people away from the then-dominant CBR900RR FireBlade, but – alas like the Ninja – it didn’t really slice the old mustard.

So what was wrong with it?
Nothing if you read the launch reports from 1994. Back then the press of the day were generally positive about a bike when ridden solo, but when you put it back to back with its peers, it was then that they would suffer in comparison. Again the RF900 wasn’t the same thing as the Blade. It was a much more comfortable proposition, using the ‘Ferrari Testarossa’ styling of the earlier RF600, featuring a motor based on the GSX-R1100W, but with the smaller RF’s 36mm carbs. This gave it useful torque but a still-good top end of around 165mph. The beam frame showed up its sportier brethren the GSX-Rs in the handling stakes, even if the RF itself was never deemed that cool. Like most of the Blade’s competition it wasn’t power but weight which was its undoing. At 203kg it was 18kg heavier than the Blade and had lazier steering geometry (and a 17in front tyre) even if it was lighter than the ZX-9R. So it was comfier, but not as cutting-edge as the Blade and the sportbike-mad buyers flocked away.

So what was right with it?
Simple, while it didn’t take on the Blade in terms of outright sporting ability its comfort and poise with a pillion made it a favourite, as did its solid stability at speed, but the biggest thing was price. Consider this: a FireBlade was £8195 in early 1994, a ZX-9R £8095 and a ZZ-R1100 was £8350. The RF900R was a paltry £6799 and a grand cheaper than the firm’s own GSX-R750. That made it perhaps the best pound per performance machine on the market at the time – certainly in the big-bike class.

What did shrewd buyers think of it?
Those that put their money down first time round (and today) were people who wanted something big, fast, cheap and comfortable. They didn’t care how much quicker the Blade was around a track, but wanted something with kudos to take the other half away on and still have fun on their own. Little wonder there’s a thriving community out there (www.rfownersclub.co.uk).

What goes wrong with them?
Not a great deal, but then for this bike to be around £1300 cheaper than a Blade new in 1994, savings had to be made somewhere. Finish was the biggest thing. You’ll either find really well looked after RFs with anal owners or you’ll find those that have simply left it to the elements. Suspension too was basic if pushed hard when new. The rear was fully adjustable, but the front was rebound and preload only. Brakes were also marginal at the time (Nissins) and colour schemes did go from garish (and with red frames that get flakey) to cool dark colours and silver frames.

So just how forgotten is the RF900R?
Very: here was a bike that was great value at the time, but left to wither on the Suzuki vine with nowt but paint changes. Road-riders loved the looks and practicality, but future users were denied any upgrades and the bike died five years after launch.

How much are they?
These things were cheap back in the day. Some would argue also that the looks have remained fresh – maybe as there aren’t that many out there.

Today these things haven’t devalued quite like perhaps the ZX-9Rs have, but they are still phenomenal value. An early 1994 plate bike in iffy condition starts around £700, but we’ve even seen nice 1999 bikes go for £1200. Dealer machines can rise to £2500, but go private and you will have a rare, classy machine for miniscule money.