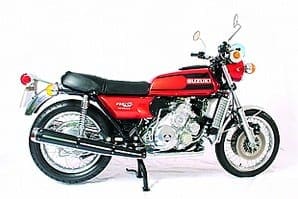 Suzuki launched its radical rotary engined RE5 at the Tokyo Show in Autumn of 1973 and appeared to be leading the rotary revolution. The company obtained a rotary licence from NSU in 1970, and had set a team of engineers to work on a prototype that was initially named the RX-5, standing for Rotary eXperimental, 500cc. It was typical of the Japanese industry that while DKW and Norton had chosen to develop relatively simple, air-cooled motors, Suzuki attempted to get round some of the typical problems of rotary engines by using innovative engineering.

With a Wankel rotary engine, power is produced by a near-triangular rotor, which spins around a central shaft inside an oval chamber. By comparison with a piston engine, the rotary has potential advantages of simplicity, fewer parts, smoothness and light weight. But inevitably rotary technology was far less well developed than its piston engined equivalent. The designers’ work included solving new, rotary-specific problems relating to ignition, carburation and cooling, as well as providing an efficient seal for the tips of the spinning rotor.

Suzuki’s high-tech approach was easy enough to understand. The complex twin-choke carburettor was used in an attempt to provide good power at both low and high revs. Trouble was, it was big, heavy, complex and needed five cables. The sophisticated ignition system was designed to improve engine performance when the throttle was shut; a typical rotary weakness. Another problem area, the rotor tips, was addressed by supplementing the normal lubrication set-up with a separate, two-stroke style system that fed oil into the combustion chamber with the fuel/air mixture. Water-cooled and heavily engineered, the RE5 shared many cycle parts with the company’s GT750 series, giving it a reputation for being both thirsty and heavy. Never a big seller, the RE5 was face-lifted with conventional instruments and tailight for 1976 before being finally dropped from the range in 1977.

The stunning example here is owned by David Wilkinson is a member of the Suzuki Owners Club, and carried out all the rebuild work on this bike himself. Having originally bought the bike on the internet in March 2000, David has just tracked down a complete new engine to complete this four year restoration project.