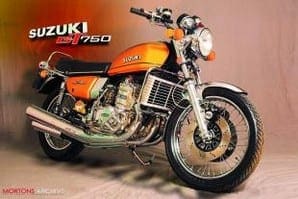 Andy Jones is not the usual run-of-the-mill bike restorer; being more interested in what pleases himself than the opinions of club cognoscenti. To that end, his immaculate and meticulously prepared Suzuki GT750 is finished in a colour that was never a factory option. While we're on the subject the front mudguard is wrong as well. The ex-Royal Signals man isn’t bothered in the slightest what people think about his bikes, although thankfully the general consensus is one of great approval.

Andy had lusted after the mighty GT750 back in the 70s but, being strapped for cash, the young army recruit had to settle for the smaller siblings, the GT185 and GT250 twin-cylinder versions. As soon as time allowed, he just had to get a GT750.

Very first time
Events nearly conspired against this move as, at the age of 41, he became a father for the very first time, when daughter Alexandria appeared on the scene and then again a year later when Cleopatra followed her sister into the world. This has slowed down Andy’s restorations slightly, but he now finds himself in the workshop just that little bit later at night once the kids are in bed. Keeping it all in the family, wife Laura helps out with the bikes too, having recently bought Andy a hydraulic bench, a set of expansion chambers and an Arai helmet now painted up in the colours of some bloke called Damon Hill.

Following his unintended restoration of a CB550-4 a few years earlier he stumbled across not one GT but two. Having learnt many lessons from the Honda rebuild he decided that two bikes would be better than one, especially if problems arose electrically or suchlike later on. The common route is that, while one machine rises out of the ashes to perform again, the donor machine often becomes little more than a few pages on eBay. This wasn’t the case with Andy’s Suzuki project, and now both machines are up and running. He sold the second machine to his ex-army pal Paul Kirk as a runner that has since been turned into a rather pretty Dunstall body kitted special.

Andy is quick to point out how crucial the Kettle club has been to these projects with tech support, spares supply and general advice. Without their help he says the project may never have reached fruition. The GT’s gleaming polished alloy engine casings have now received the full-on chrome treatment, as this is one show bike that does get used come rain or shine; Andy currently clocks up in excess of 2000 miles a year on it. Further work to be done includes an upgrade to the braking, involving EBC floating discs and six-pot Pretech calipers, while on the cosmetic front something rather special is planned for the paintwork.