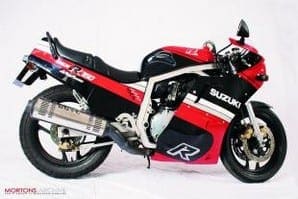 The GSXR750 was a revolutionary motorcycle with an entirely new air/oil-cooled motor developing 100bhp out of the crate and a lightweight alloy double-cradle perimeter frame. Weighing less than 180kg dry, the bike was a homologation special, the optional factory tuning kit upping power output to 130bhp. The Gixxer was unveiled to the public at the 1984 Cologne Show, and went on sale in March 1985. Narrower, lighter and more powerful than previous engines, the Gixxer used Suzuki’s new SACS cooling system, with the top end oil cooled via engine oil injection, offering the efficiency of water cooling without the weight.

The bike was an instant hit, and for 1986 Suzuki made only minor changes to the design – a 25mm longer swingarm and radial tyres helped to cure the bike’s nervousness under power. By 1987 the GSXR750H had adopted the 41m forks and 21-litre fuel tank from the factory race bikes, and criticisms were limited to the rear shocker, which could overheat and fade under pressure.

The 1988 GSXR750J was the first major revamp of the series, with a new short stroke motor and curvaceous restyling job. Power was upped to 112bhp, weight went up to 195kg and wheel sizes went down to 17in. The frame and swingarm were redesigned for greater rigidity and forks, brakes tyres and carbs were all upgraded. USD forks appeared in 1990 with the GSXR750L, which also reverted to the previous long stroke motor. Power was upped again to 115bhp. Another new frame in 1992 accompanied a change to the cooling system.

The 750 Gixxer continues in production, with major redesigns in 1996 and again in 2004. The bike remains the archetypal street sports bike, benefiting from the reputation built on those early slab side models of 1985 and 1986.

Owner
This bike is owned by Tony Scragg, of Somerset. A member of the Suzuki Owners Club, Tony has owned this virtually original model for four years. This bike was road-tested for several magazines and has been ridden by our own Roland Brown. It also featured on the BBC’s Top Gear programme ridden by Steve Berry.