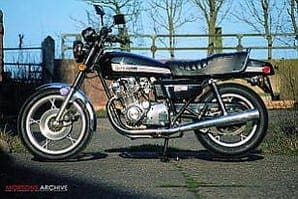 Suzuki admitted that the legendary Z1 had been an inspiration in the creation of their first ever four strokes but it seems that prototype GS fours were closer to a litre displacement, so in a sense the 750 was actually derived from the 1000.

Possibly Suzuki decided that the world wasn’t ready for the ultimate in 1977 but then had to have a rethink when Honda brought out the CBX and Yamaha the XS11.

Although the GS1000 was obviously very similar to the 750, there were plenty of important differences. It definitely wasn’t possible to turn one into the other just by swapping barrels and pistons. For a start, both the bore and stroke were different: 65 x 56.4mm for 748cc, 70 x 64.8mm for 997cc. This made the bigger version slightly taller, but that was only the beginning of it.

The 997cc engine also had a lighter crankshaft with a different design of counterbalance webs, helical instead of straight-cut primary drive, a stronger cam chain with no jockey wheel between the cams up in the cylinder head, plus a beefed up gearbox. Moving back, more weight had been saved by deleting the entire kickstart mechanism. In theory this also had the benefit of making the engine shorter, which meant that the gearbox sprocket could be closer to the swinging arm pivot. Doing so might have had the effect of shortening the wheelbase, as needed to give sporty handling.

However, back in 1978 designers didn’t really bother much about such things. (Ducati V-twins were generally considered to be the best-handling bikes available and they had wheelbases of around 60in.) I seem to recall that Barry Sheene had a hand in finalising the 750’s chassis and lengthening the wheelbase was one of his recommendations.

While the GS1000 frame was similar to the 750’s, a 30mm longer swingarm was fitted, pivoting in needle-roller bearings. This seemed like a major advance over the Honda CBX’s nylon bushes, it has to be said.

Taper roller bearings
Up front, the forks turned in taper-roller bearings and used 37mm diameter stanchions – pathetic now, but avant garde in 1978. A first, the springs were also assisted by air pressure (straight from the RG racers), with silly separate valves for each leg and a specified range of 11-17psi. A pressure of 14.1psi was recommended… guaranteed hours of messing around for very little reward, and don’t even think of going near the valves with a garage air line unless you want to blow the seals!

There was quite a bit of confusion with early GS1000 model designations. The plain version, sold at a bargain price in the US, had a single front disc and spoked wheels, the rear an 18-incher like the GS750’s.

A snip at £1725 when introduced, Suzuki only waited a few months before bringing out the updated EC. Listed at £1899, the main differences were a new pair of gas/oil rear shocks and an indicator beeper. Rumour was that they just wanted an excuse to bump up the price as the bike was so popular. Surely not!

Whatever the model designation, somehow the 1000 always looked generally bigger and longer than the 750. In simple figures (although it depended on which spec sheet you believed), there was really very little in it: about 25 lb in dry weight, half an inch in wheelbase.

The two shared the same 63 degree steering angle but the 1000 had more trail, perhaps just because the front tyre was of slightly bigger section.

As it was, maximum twist came at 6500 rpm and soon faded, partly explaining why a top speed of 125-135 mph was more likely, according to road tests, with standing quarters of around 12s.

So what was the fuss about? Hadn’t Kawasaki Z1s equalled or bettered that five years earlier? Yes, and the Honda CBX1000 and Yamaha XS11 launched at almost exactly the same time as the GS were generally faster.

Secret weapon
But the Suzuki had a secret weapon – handling. While the Yamaha and Honda wallowed around like drunken hippos when ridden at speed, the GS1000 was rock steady. That’s what everyone used to say at least and a strong showing in the popular Avon proddie race series of the time tended to confirm it.

Personally, I never thought the biggest GS was all it was cracked up to be. After that first encounter, when snow stopped play, I rode plenty of 1000s and all seemed to be less than 100% predictable in corners. Or straight lines, come to that.

As it happened, I owned a GS750 at around this time and always came to the conclusion that it was a better bike than big brother. Although the engine obviously hadn’t quite the same rush of top gear acceleration, it was far more sporty. Despite running it on a selection of dubious tyres, the 750 felt more stable, and was therefore a faster bike in the real world.

So much for the ancient history. My motorcycling requirements are different now. Speed and pin-sharp handling don’t really concern me too much and it’s reasonable to assume that most classic buyers feel the same, or they’d go out and get a boringly fast modern bike.

Swinging a leg over a GS1000 for the first time in many years, there were no surprises. I expected it to feel big, wide and heavy – and it was. The petrol tank was necessarily fatter to cover the broad frame but I can’t see why the seat (non-standard on the test bike) needed to be so wide. The contemporary Kawasaki Z1000 was actually heavier but felt far more manageable because of its waspish waist.

UK bikes came with flatter handlebars than this US spec version, which may have been an advantage at high speed but did nothing to make the bulky Suzuki easy to punt around town. Even with these American trials bars, trundling off into the lanes, the GS1000 felt very slow-steering and stodgy.

Once I reached some major roads the handling was better, although you can’t forget that you’re riding a heavy bike with a long wheelbase and lots of steering trail. While this is only a theory, I’ve been wondering recently whether hefty, first-generation alloy wheels spoiled the responses of bikes of the late 1970s and early ‘80s. These chunks of thick aluminium are very heavy and the front is 19 inches in diameter and carries a high-profile tyre: there’s a whole lot of gyroscoping going on down there!

The general feel is a bit like a Laverda triple of the same vintage, except that you don’t need to go over something bigger than a housebrick to make the suspension move.

Seems 'unsporty'
Ride comfort is the bonus but the handling just seems ‘un-sporty’ and I don’t think painstakingly syringing another few psi into the forks would help much.
In the Suzuki’s defence, you have to allow for the fact that the test bike is 25 years old and has getting on for 30,000 miles on the clock, of course.

Moving on to the engine, you could easily mistake it for a Kawasaki four. It makes the same sort of whistly noises and rumbly vibrations, explained mostly by the gear primary drive and roller-bearing bottom end. Beyond that, the power characteristics are also similar to a contemporary Z1000.

While the red line is at a respectable 8500 rpm, it’s not really particularly revvy. Or torquey for that matter – certainly not compared with a Yamaha XS1100, which would leave everything else for dead in top gear roll-ons until the Kawasaki Z1300 six came along the following year. Suzuki added a bit more zest to the EN model by fitting bigger 28mm carbs. They then improved the looks by releasing the 'ice-cream van' S-model.

Unfortunately, the handling went the opposite way in my experience, thanks to that BMW R90S inspired handlebar fairing.

None of this mattered much for long, though, because in 1980 Suzuki upped the stakes by launching the GSX1100. Not a pretty bike, but it sure did go well. So, after almost a quarter century, I still think the GS750 is better!