Honda went above and beyond to win production superbikes races in the early 1980s. This was the first ever true Honda proddie homologation racer. 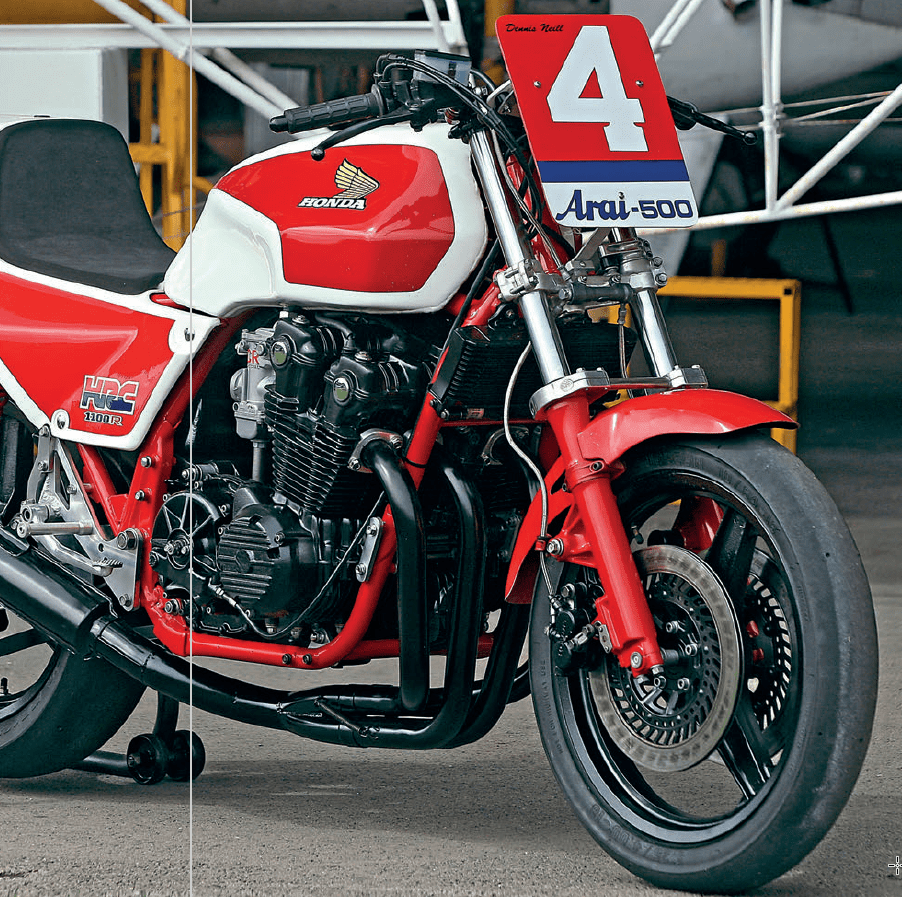 In 1980 Honda had an obsession with winning production bike races. With the various rules and regulations in place restricting what could be done to a standard production bike, the company set about the very expensive task of building a race bike that would not only meet those rules but push them to their limits, right off the showroom floor – and the CB1100R certainly did that.

To be eligible for racing, 500 CB1100Rs needed to be made – Honda exceeded this by producing 1050 of the first CB1100R B-models, with a limited number being built for the UK market. The result of this new race built bike was Honda literally blew the competition clean into the weeds. 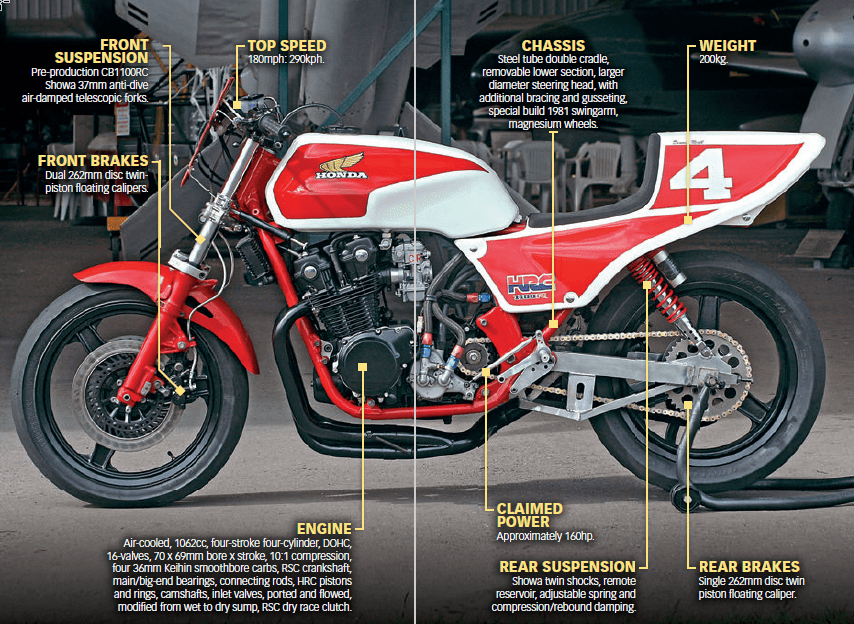 The inline four-cylinder motor was coupled with four 33mm Keihin carburettors that produced extremely smooth power and plenty of torque, especially in the mid-range. With all that power on tap, the engine internals needed to be strengthened to take the stress. This included new crankcases, a wider primary chain, stronger con-rods, forged pistons, race camshafts and an upgraded close ratio gearbox.

Honda used the CB900 chassis as a base but used a better quality steel. It also made the frame one-piece, to improve torsional strength, as opposed to the CB900’s removable down tube, which made servicing and engine removal easier. The front forks were pretty trick and featured large 37mm inner tubes, while you could also fine-tune the air pressure in the suspension for better handling, with both forks being linked via a small hose to balance the air in each leg.

At the rear, the CB1100R was treated to state-of-the-art shocks, which had compression and rebound damping, as well as a remote reservoir to reduce the heat build-up, from over use in race conditions.

The brakes on the bike were sensational and needed to be as the CB1100R was no lightweight at
235kg dry and this was with magnesium side casing and the extensive use of alloy around the bike, such as the 26-litre endurance fuel tank. The brakes were a ground-breaking first for Honda with the use of twin-piston calipers – these were squeezing large 296mm discs. At the back a single twin-piston caliper was used to complete the set-up.

By all accounts, the overall effect was impressive to say the least. The bike went on to become a classic milestone for Honda, not only was it the fastest bike in production at over 150mph, it was also one of the first true mass produced homologation bikes by a major manufacturer and is well rooted here in Australia with riders such as Tony Hatton and Dennis Neill influential in Honda’s decision to build the bike and race here in the Castrol 6-Hour. It was also used well by you lot over the sea in the British Production Street Bike Series by the likes of Ron Haslam, who also gave one a run-out over here in the 6-Hour at Amaroo Park in Sydney.

So what about this very machine? Well, this bike is one of the most famous motorcycles in Australian
Road Racing history but also very close to what Haslam would have raced in the UK. It was the very first factory superbike based on a true homologation special and also sadly ended the career of one of our most talented motorcycle racers, right in the peak of his career, the late Dennis Neill. We’re going to focus on the bike here, as (accident aside) this machine is a true work of art and possibly one of the most collectable racing motorcycles still here today. It’s great to see it back to its former glory.

The bike was originally built for Dennis Neill to use in the 1981 Bathurst Arai 500, a prestigious 81 lap race for unlimited superbikes that attracted international stars of the day. Dennis had had great
success on Hondas including pole position at the Castrol 6-Hour in 1979 on a CB900, third the year before on a CBX1000, pole in 1980 on the CB1100RB and second in the race behind Wayne Gardner on the Peter Molloy CB1100. In 1981 the bike he rode to pole would be transformed into the bike you see here, the full superbike spec 1100RB, chassis built by Chris Dowd and engine by Tony Hatton and Honda Australia. 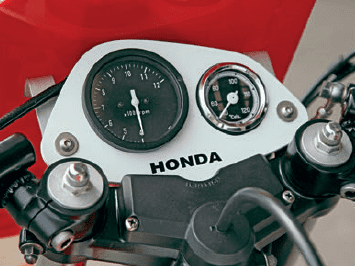 At Bathurst in 1981, the bike’s main purpose was to win the Arai 500 and the bike was a full-house superbike. Sadly on lap five, the accident happened (see boxout) and the bike has been around the block a few times since but always in good hands. After the Arai 500 crash the bike sat around until being rebuilt by Honda Australia for, we think, Wayne Clark to race. The bike was raced in the Australian Superbike Championships for a number of years and eventually, the current owner Derek Flemming, located the bike and purchased it. He then tracked down and bought all of the original spare parts for the bike and began the job of tidying it up to get it how it is today, a stunning original superbike. The bike is full of trick parts and one-off components from the days when a good race engineer would make parts themselves or get them made.

It also has some lovely early Japanese factory components. The crankcases are original alloy/magnesium CB1100RB but house an RSC crankshaft (Derek has the box and it has a note in Japanese to “return to Honda factory after Bathurst” inside!) RSC main bearings, con-rods, HRC pistons, HRC camshafts and cylinder-head porting, HRC inlet and exhaust valves, HRC dry sump system with alloy oil reservoir under the seat and a HRC close-ratio five-speed gearbox with an RSC dry clutch conversion with cable actuation. Fuelling is by Keihin 36mm smoothbore carburettors and the outlet is a stunning hand-made factory four-into-one exhaust system. Ignition is also factory HRC.

“The engine still has the broken fins on the cylinders from the crash,” says Derek, “and all the parts are as per original. It fires up easily and is very, very meaty and crisp. It has always been in good hands. Good mechanics, A-grade riders and so forth so has survived all of these years in one piece.”
The chassis is equally stunning. The frame is original braced CB1100RB with factory tripleclamps and the post 1981 alloy braced swingarm. The forks are pre-production CB1100RB 37mm Showa items with built-in anti-dive and the shocks are pre-production Showa fully adjustable piggyback units. The brakes are cast iron rotors squeezed by CB1100RB calipers via a CB1100RB mastercylinder.

The rear caliper is an underslung unit and stainless steel lines are used. Wheels are 18in magnesium full factory racing wheels that were very fat for the day and wore Michelin tyres. The original fuel tank was destroyed in the accident but Derek had a replica of the 26-litre alloy unit made and has the original at home for a spare. The rear tail unit was modified to comply with early 1980s superbike regulations but the rest of the bike is as it was ridden by Dennis Neill. This amazing bike has many stories to tell and it is fantastic to see it in all of its glory.