One of the premier events on the motorcycle calendar has enjoyed yet another bumper weekend, as enthusiasts poured in to Staffordshire County Showground to see star guests, stunning bike restorations and a record-breaking Bonhams sale.

Stafford Motorcycle Show Is A Roaring Success
This Brough Superior was one of three to sell at Stafford, making the show’s annual auction the highest-grossing motorcycle sale ever in Europe
Thousands came through the gates across October 17-18 to the Carole Nash Classic Motorcycle Mechanics Show, exploring the hundreds of trade and autojumble stands packed into every corner of the venue.

Exhibition manager Nick Mowbray said: “Across all areas, this has to go down as one of the most successful Stafford shows ever. A record-breaking auction and increased attendance figures certainly demonstrate that.

“Most important though, our exhibitors and showgoers gave us fantastic feedback, and are going home happy. Now the bar has been set even higher for next year, so we’d best start thinking about how we can top it once again.”

It was a record-setting motorcycle auction at the show, as three Brough Superiors sold for a combined £704,500.

The star lots contributed to a total weekend figure of £3.6 million worth of machines sold, an all-time high for Bonhams’ annual October event and the highest grossing motorcycle sale to ever take place in Europe.

“Enthusiasts are willing to spend strong figures for both complete bikes and restoration projects, and we’ve witnessed that today where a 1927 Brough Superior 981cc SS100 Alpine Grand Sport project was the highest grossing lot.”

Former Top Gear host James May added a celebrity element to the auction room as he turned up to see four examples from his own collection go under the hammer. Top lot for Captain Slow was his 1967 Honda CB450 ‘Black Bomber’ which sold for £5980.

On Saturday, a collection of 60 rare, mainly American motorcycles – stored in a highly sought after personal collection – achieved a total of £1.3 million. Four-time Formula One world champion Sebastian Vettel was among the crowd for the sale.

A rare-to-the-UK 1968 Suzuki T305 has scooped the prestigious honour of Best In Show The model, which was only produced for American markets, was brought to the UK by current owner Paul Cann just before the same event last year.

He’s since used specialist suppliers and service providers to restore it to pristine condition; his project being rewarded with the highly sought after honour, a trophy and £100 first prize.

Paul said: “I’ve always been interested in bikes that are a little bit different, and with this particular Suzuki having never been sold in the UK it does get a lot of attention when displayed here.

“I bought it on eBay, had it imported by DK Spares and then got to work. I’ll exhibit it at the classic bike show in Somerset in February, and then it’ll be retired to my garage. I’m sure the next project won’t be too far behind.”

It was also a successful event for members of the Kettle Club, with the Suzuki GT750 enthusiast group claiming the Best Club Stand award.

A variety of models were on display, but it was the 1970s disco and tie-dye theme which really caught the eye; exhibitors on the stand even dressing up in some instantly recognisable 70s apparel.

Kettle Club committee member David Hewitson said: “The GT750 was launched in 1971, and we had several bikes on the stand from the decade. Our ‘theme’ pretty much decided itself!

“We’ve signed up 16 new members this weekend, and we’ve had many, many more people take away application forms. Claiming the £1000 Best Club Stand award is the icing on the cake.”

The club also drew attention to the stand with a fully functional GT750 engine controlled by microprocessors, and a smoke machine to evoke the nostalgic feel of the two-stroke machine.

David said: “We’re particularly proud of the engine, which has taken us years of painstaking work to put together. It’s been a real draw for visitors, so it’s all been worthwhile.”

Thousands of motorcycle racing fans turned out to see their hero as Isle of Man TT legend John McGuinness took his place as star guest.

The 23-time TT race winner appeared on stage several times throughout the weekend of October 17-18 being interviewed by fellow road-racer and TV host Steve Plater.

John said: “I just love bikes. If I wasn’t a racer I’d still be a huge fan. Coming to events such as this one and talking to people about our bikes… I love it!”

Addressing packed crowds, John covered topics including his plans for next season’s racing, his own personal collection of machines, his fellow competitors and teammates and what’s left on his career wish list.

He revealed that he signed a contract last Sunday for an 11th consecutive year with Honda, and will be competing at the North West 200 and TT in 2016.

When asked about retirement, he told the audience that he feels as good as ever when he’s on the bike, and can’t currently imagine a scenario where he’d be able to give that up.

Responding to a question about what he has left to achieve, John said that having not won at the Classic TT is a source of great frustration for him and is something he wants to put right.

Classic Bike Shows exhibition manager Nick Mowbray said: “John has been one of our most popular ever guests of honour; everyone we’ve spoken to at the show nothing but respect for him and the queues waiting to meet him were some of the biggest we’ve seen.”

As well as appearances from McGuinness, John Cooper, Sammy Miller, Jim Redman and Colin Seeley were among the famous motorcycle names to grace the venue. 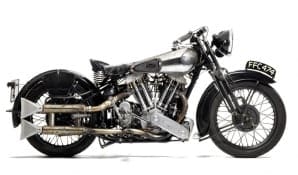