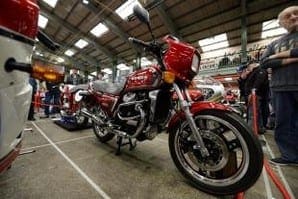 The full restoration was completed just in time for the Stafford show – with only a week separating the completion of the project and the beginning of the event!

The CX650ED, which first arrived in 1983, and some it’s other brethren in the Honda camp were well regarded throughout the 80’s and 90’s. They had a reputation for being near-bulletproof machines, and were often favoured by motorcycle couriers in large cities like London for their durability. In terms of cosmetics the CX650ED was not too far removed from the CX500 Sports model that emerged a year earlier, though other appointments such as the brakes and suspension were a touch more advanced than those attached to its older brother.