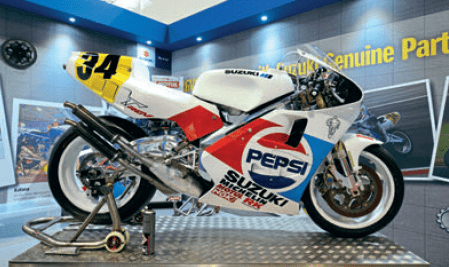 Looking back, 1989 was one of Schwantz’s best season for results, with only crashes preventing him from lifting the world title. He finished either first or second in every race he completed that season, taking six wins and a further three Sexy Suzuki RGV500 rebuilt! runner-up finishes.

Eventual winner was Eddie Lawson on the Rothmans Honda, while Lucky Strike Yamaha’s Wayne Rainey also figured highly. Kevin would eventually lift the world title for Suzuki in 1993 and the Texan was named a Grand Prix legend in 2000. Suzuki restoration projects or builds have become a mainstay of
the Motorcycle LIVE in recent years and after the Vintage Parts Programme was launched at the 2013 event, Suzuki has gone on to build a brand new TL1000S, restore an original GSX-R750F, plus build Team Classic Suzuki’s Katana Endurance racer at the last three shows.

When editor Bertie sidled up to chunky Nathan and mentioned that perhaps the frame was a little too polished he was sent away with a flea in his ear and told to check photographs!

More on this beautiful machine in a future issue of CMM!