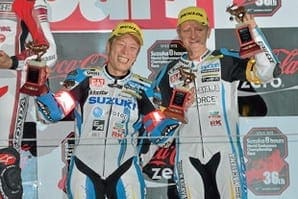 First was Leon Haslam, on a still dodgy leg which his own dad Ron remarked just a few weeks before: “Isn’t strong enough to qualify on, let alone race on.”

This shows that they not only breed ’em tough in Derbyshire, but that the 8 Hours just ain’t the same any more. Now, we’re not dissing those that take part in this once-legendary event, but, remember when the great names in 500cc GPs took part: Mick Doohan, Wayne Gardner, Wayne Rainey all racing with the World Superbike riders of the time. Even our own Carl Fogarty used to lock horns with the GP riders of the early 1990s. It was a real mishmash of talent and awesome machinery. And the upcoming road bikes of the day would be showcased, with the likes of the RC45 and the NR750 being marshals’ bikes.

A decade ago you’d see Colin Edwards link up with Valentino Rossi on Honda SP-1s, but this is no longer the case. It’s rumoured Ron Haslam won more cash being second in the 1979 event than Leon did for winning this year.

Our own Niall Mackenzie raced at the Suzuka 8 Hours and says: “Back in the day every factory rider raced there from GPs. It was in my HRC contract. I did six or seven 8 Hours and my best result was second in 1992. The last time I raced there was 1994 on a Yoshimura Suzuki and I got paid £40,000 and Eddie Lawson once told me he got paid £100,000 just to race there. I don’t think we should take away what Leon and the likes of Kevin have done this year. The 1000s are harder to ride than the old 750s, so you could argue it’s harder now.”