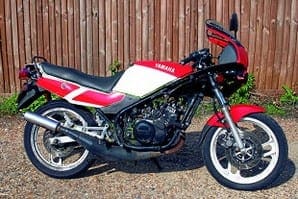 Heart rules head. I get that now and being in my 40s I think it’s a bonus to admit it. This is why I bought a basket case RD350R off of our own Mark Haycock – so first the case for the defence.

Being a decade younger than the likes of Niall Mackenzie, the original LC just passed me by, but the Yamaha RD350F and N models didn’t: they rocked my world. A zip on one back in the day and lots of goes on the back of my uncle’s sold me on the beauty of the parallel twin YPVS. Eventually, back in 2001 I bought a 1986 F2 and used it, but it was a bit shoddy and I flogged it (foolishly) in 2007.

A few years ago I was close to buying the bike you see below with the yellow frame. It was an unfinished project, an F1 or 2 and owned by CMM friend Andy Bolas. The fact that it had a garish yellow frame and no bodywork at all meant I had to turn that into a thing of beauty – and so, with the help of a mate who is a genius on Photoshop, we came up with some variations on the yellow-frame theme, with the whole essence of the standard paint/decal design of the N2 of 1986, which I love so much. That was the plan anyways, but a breakdown in communication saw Andy sell the bike to a mate of his before I handed over the readies. I was gutted. Dream over.

Until the other day when a mish-mash of emails between me, Scoop and Mark Haycock revealed that our wizened sage had a 350R project which he wanted shot of. Dream back on – I told him I would take it off his oil-soaked hands. 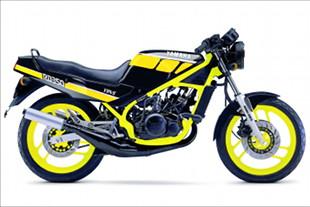 So what is it and why?
The panels have bits missing from them and a massive chunk is missing from the rear of the right-hand side. This is all a double bugger as I’d begun collecting panels for the bike I was going to buy, then sold them when the deal went sour: I have doubts that some of this one can be saved. Thankfully Mark says the tank is okay and – hell – perhaps there’s a bodywork repair article in this at the very least.

The front fairing is damaged too, but as I’m simply going to get rid of the fairing in a bid to build a facsimile of an N, I don’t care or need it: never liked the twin-spots on the R anyways.

One big bad point is the motor. Mark says: “The original owner said that one day the engine made a funny noise and it stopped. It had seized up, but did go again after being allowed to cool down for a bit, but that it still wasn’t right so he just left it outside his house, whereupon his next door neighbour reversed into it, knocking it over and breaking the fairing and indicators.

“Then he left it in his garden, wondering what to do about it and two years later he got fed up and flogged it to me. I’ve done the same – except at least I have kept it under cover. You might remember I did a piece on undoing impossibly rusty nuts and bolts? Step forward RD350R. I managed to get the cylinder barrels off eventually, but after that fun-filled episode I threw up my arms in despair!”

If this bike sounds like some unlucky stray (okay, mongrel) you’d be right and as I’m a magnet for all the local stray cats, I couldn’t help but decide to take this one in to see if it could purr again. A mere £250 has secured it (stop laughing at the back) but that’s still less than the £330 Mark paid a few years back. So let’s see what happens.

The case for the prosecution will doubtless open their account by saying that the RD350R (1992-1996) was a mongrel from the start: and they are correct. We called it a ‘Lemon’ last year and Stan Stephens himself is also derisory of it. From research it seems the R not only had restrictors in the pipes, it also had different jetting/carbs, cylinders similar to the original 1983 YPVS model rather than the N and Fs and a lower compression ratio.

All because where it was made (Brazil) used fuel which had up to 20% ethanol in it. The 4CE motor also supposedly has different ignition and flywheel. Then there’s the fact that the last time the motor ran a few years ago – it actually didn’t. Speaking to Stan, he says a rebuild would cost double what the bike is actually worth.

When I told him I’d simply buy a second-hand engine from eBay, he laughed and said: “You’ve already got one of those…” Simple logic from an onlooker is often required to stop you wasting your money! In my defence (again) it’s cheap and I doubt this one was raced… but I still dream of a black/yellow beastie buzzing the lanes around Brigstock.

But I’ll open it up to the masses: feel free to be as insulting as you want, but what should I do? Stick to the original dream? Or do something like an N2 but with a variation, maybe fit a different front-end/rear-end and wider tyres? And what colour should it be? Rather than rusty brown, I mean. Answers on a postcard please.