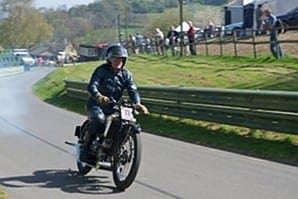 The 2011 Prescott Bike Festival was a huge success and this year's event, on Sunday, April 22, at Prescott Hill, Gotherington, Cheltenham, Glos GL52 9RD looks to be even better.

New for this year, the festival will feature a new ‘Race Bikes Thru’ the Ages’ display. Here, festival goers will not only be able to get up close with rare exotica, early pioneering machinery, modern MotoGP bikes and more but they will see many of them in action, ridden by race riders. Of particular note is support from competitors in the Lansdowne Classic Series, who will display some of the most prestigious race bikes of the 1950s and 60s. The 2012 Festival also promises a children's demo area, a new Orchard Food & Bar Village, a Run the Hill Fancy Dress competition and much more.

Go to www.prescottbikefestival.co.uk for more details of the event.

All proceeds from the day will go to the Nationwide Association of Blood Bikes and Severn Freewheelers.

The Nationwide Association of Blood Bikes is the umbrella organisation representing 12 regional blood bike charities, all providing a motorcycle-based, free delivery service to the NHS; moving vital medical supplies, blood and pathology samples from medical centres and hospitals throughout the UK. Recently NABB member groups have become involved in the transport of frozen human milk from the donor to the milk processing hospitals. This has been a real lifesaver due to the necessity of very premature babies having intolerance to anything but human milk.

Run entirely by volunteers, NABB member groups have over 700 active members with a fleet of 35+ emergency response motorcycles. All NABB riders have an Advanced Riding qualification, are trained in the movement of medical essentials and operate from individual regional charities but with a common goal – to alleviate suffering and reduce the funding pressures on the NHS.

NABB was formed in 2010 and is chaired Gordon Downie, from Gloucestershire.