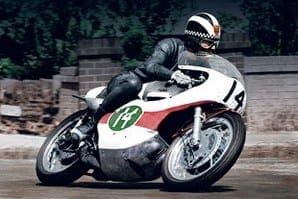 Phil Read rode his Yamaha RD56 249cc to victory in the 1964 Grand Prix world championship and went on to become the first man ever to win a world title in each of the 125, 250 and 500cc classes.

He will tell tales of his life on the cutting edge of motorsport when he appears at the 33rd Carole Nash International Classic Motorcycle Show on Saturday and Sunday, April 27-28.

The event, which will feature more than 500 traders, takes place at Stafford County Showground in Stafford.

Attractions include the gravity-defying Wall of Death motorcycle show, the GP Paddock – where you can hear the roar of legendary race-bred beasts being fired up, and a display celebrating a century of classic marque Velocette featuring nine bikes and two engines. And of course, don’t miss the famous Bonhams bike auction on the Sunday, where the headline lot is a Vincent Black Shadow that formed part of a factory bid to set a new 24 hour speed record in 1952.

The fully restored, matching-numbers machine has been owned by the current vendor for more than 40 years and is offered with a pre-sale estimate of £110,000 to £130,000.

If that wasn’t enough, there’s also free parking; gates are open 9am to 6pm on the Saturday and 9am to 5pm on the Sunday.