Scoop re-samples Honda’s micro sports twin – the CB500T and asks is this a tangerine dream, or just a lemon? 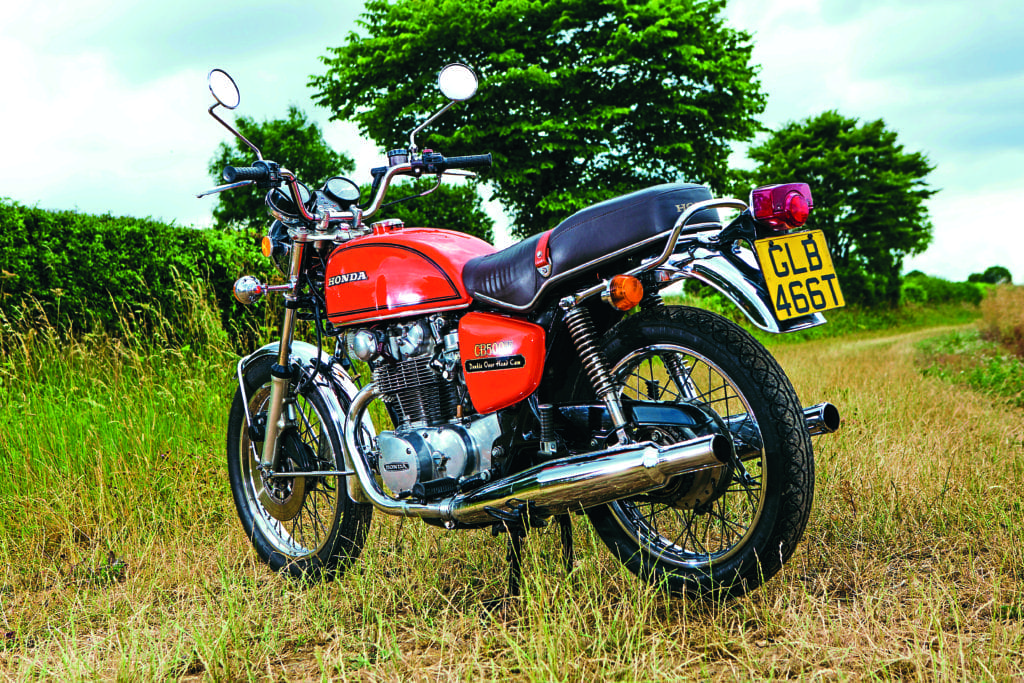 Honda CB500Ts and I have a surreal history going back to 1976. I was ‘gifted’ the keys of a brown example by our local plumber.

His son’s moped had gone bang big time and having dropped it off at the dealer the lad needed a lift. “He’s talking to the mechanic in the workshop,” said Mr Newman the plumber, “just ask for him at the showroom.” Few people have ever rocked up to a large, multi-franchise, dealer on a Saturday morning riding a Honda CB500T and naively announced: “I’ve come to collect Paul Newman.” I can still hear the laughter now! Few experiences were ever more likely to prejudice you against a bike.

And yet here I am once more with the Honda CB500T… quite possibly the most maligned, stigmatised and ridiculed Japanese bike of the 1970s. The butt of many a joke, it was hamstrung from the day of its launch thanks to a brown vinyl seat cover and decked out in either compost bin brown or virulent atomic tangerine panels. Many questioned what on earth Honda was thinking of at the time.

The truth was Honda had been thinking about cars and how to break into the four-wheeled world. They’d achieved their aim but at the cost of continued motorcycle development which had pretty much stagnated by the early part of the 1970s. The 350/4 and 500/5 were the last of the ‘new’ bikes to be launched and collectively the company believed it had created itself a breathing space. 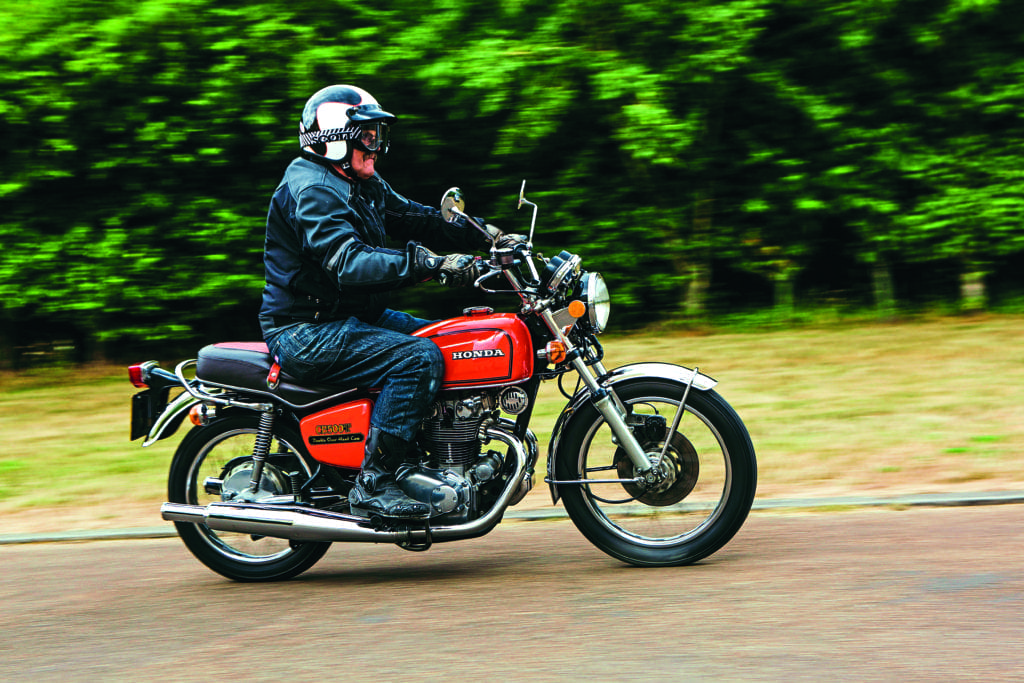 This allowed the competition to up their game and steal significant market share: Honda’s knee jerk reaction to was rehash previously successful models with new names and colour schemes, thereby expecting the public to be knocking down the doors of their local dealerships.

The CB500T was, in reality, little more than a CB450 with a disc brake, a stroked motor and a subtly modified frame. In fact it wasn’t even that, given that the last CB450s had come equipped with the very same front anchor. Inside, the motor had had its compression ratio dropped from 9.5:1 to 8.5:1 while the roller bearing mains of the 450 were swapped for balls races.

A quick cosmetic refresh, a hugely visible chrome balancer exhaust box in front of the pots and a splash or two of bling completed the job. From the off, the press slated its lack-lustre performance, its styling, the dubious colour schemes and it so-so handling. Stateside Cycle magazine reckoned an updated CB450 would have been better than the CB500T, others were less flattering! Introduced in 1975, the bike quietly fell off the sales brochures before 1977 even began.

So, a sad and damning indictment for an also-ran motorcycle: just how well does this grand old dame stand up to scrutiny? 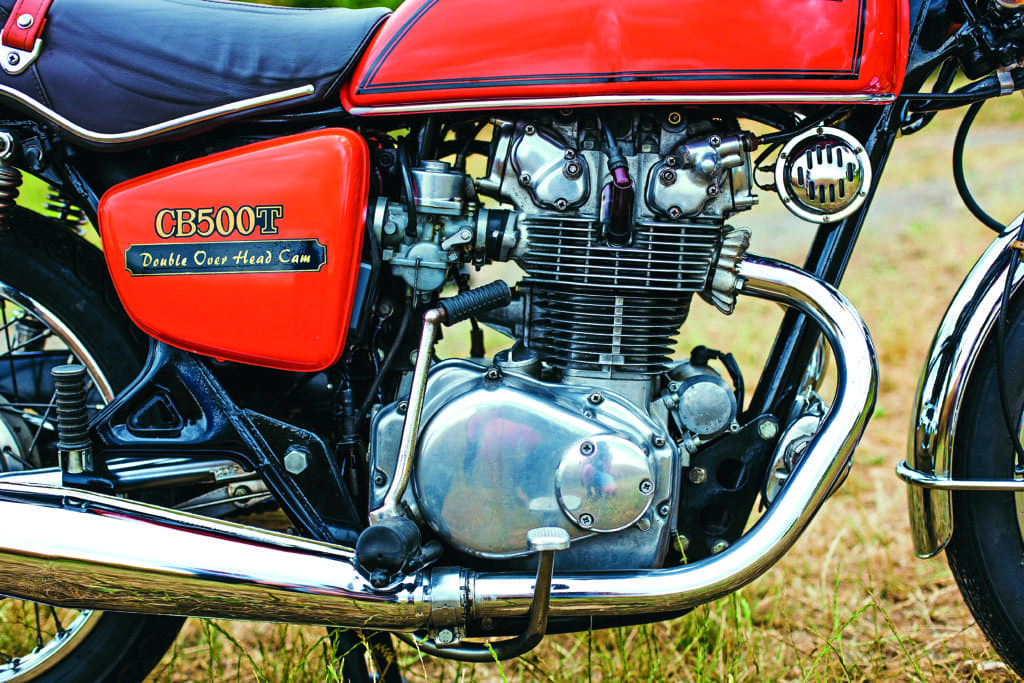 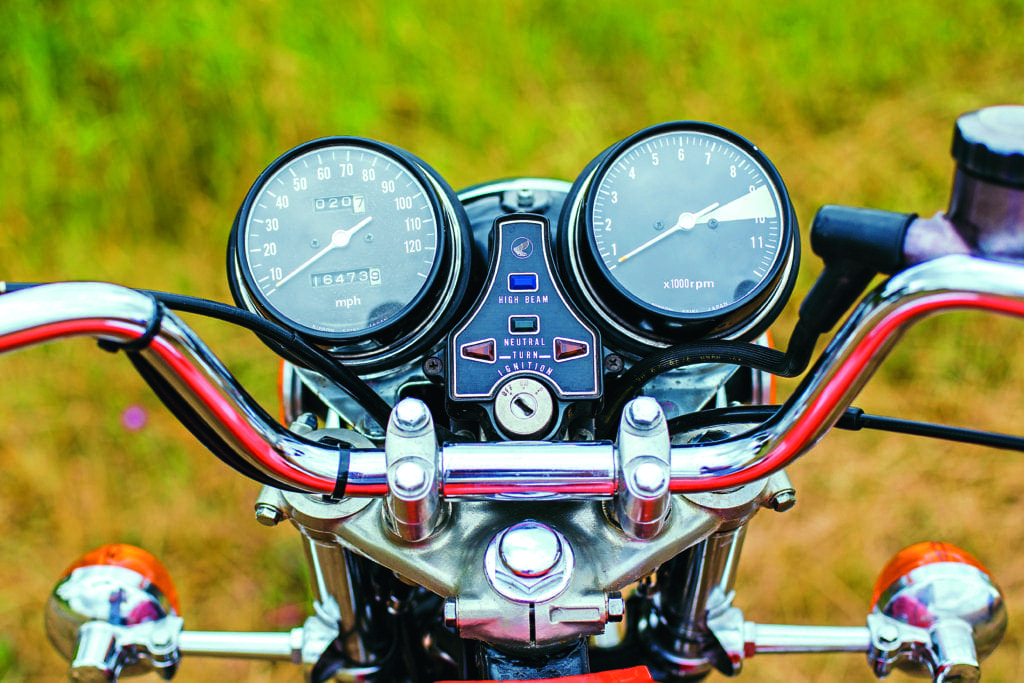 In the flesh the 500T’s looks have actually aged rather well and a brave man might even go so far to say it looks rather handsome now. Our test example, courtesy of owner Karl Chadwick, even runs a remanufactured seat cover which mirrors the paint. That once reviled orange paint now doesn’t look so garish, the unusual shaped silencers lend the bike a distinguished air and the general lines aren’t really either outlandish or ugly. Only the sloping lower edge of the seat and the corresponding lines of the side-panels look a little odd. The styling and layout are precisely mid-1970s Honda and redolent of any other oriental bike of the period.

The capacious chrome guards cover much of the period sized rubber so the rider and bike don’t get too mucky in the wet weather and there’s a decent chain-guard in place to serve a similar purpose.

Up at the bars it’s all standard fare and if you’d just stepped off pretty much anything else from the same manufacturer you’d feel instantly at home. Ditto the seat, the foot pegs, saddle etc. everything feels instinctively ‘just-so’… and then the penny drops, this is entirely what the CB500T was actually about. The CB500T’s sole purpose was to provide good honest old-fashioned middleweight transport allied to innate reliability. These are the facts that the period road testers chose to conveniently ignore. The only real question hanging in the air here is did it meet that one remit?

Throwing a leg over the twin you immediately notice the seat is on the low side of normal. The forward mounted pegs and the high-ish handlebars sit you in that classic sit-up-and-beg riding position but in all honesty it’s nowhere near the strange riding stances enforced upon fans of the early Japanese factory custom machines. The half-litre motor fires up on the button and immediately those uniquely styled silencers emit a purposeful bark. 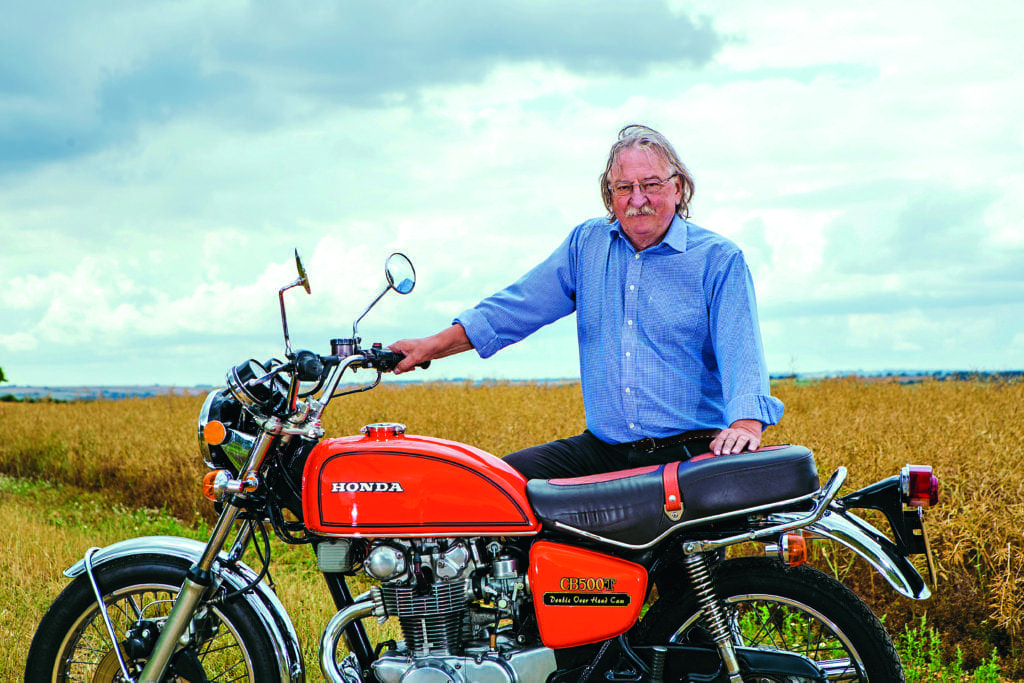 Ignore them and listen to the engine; it rustles away like only an air-cooled double overhead cam motor can. Knowing that the top-end runs an exclusive modus operandi for closing valves gives bike and rider a unique bragging right; nothing else other than the CB450 runs torsion bar valve springs. But then again coil springs do a decent enough job on every other engine so the question has to be why? And the answer is of course Honda demonstrating its engineering prowess.

Into gear and away, the motor has a surprising amount of grunt which doubtless comes, in part at least, from the stroked motor. Having ridden the earlier Black Bomber I can’t recall it having so much low down instant urge. On the road this translates into having a motor beneath that doesn’t need to be worked too hard in order to maintain decent progress. On modern, cross country, roads there’s enough power to more than keep up with the traffic but there’s a price to be paid on occasion.

If that traffic dissipates and the temptation to open the throttle takes hold, the old girl will pick up her skirts and get a wiggle on but she can also vibrate more than you might expect. The CB450 did the same at higher rpm and the acknowledged cure was to remove the upper engine mounts at the top of the cam box. Given the fact that the 500 runs a longer stroke and thereby higher piston speeds it’s only to be expected that there’s going to be more vibration. That aside the motor does exactly what’s intended of it.

As might be expected, the bike’s handling is very much in the made-for-comfort-not-for-speed category and although the frame exhibits no obvious vices you’ll not be ear-holing this particular Honda hard through the bends either. The suspension is on the plush side of soft yet this isn’t an overt criticism of the machine. Hustle the 500 through the bends hard and it all feels just a little bit woolly, yet repeat the exercise at a less frenetic pace and it all rather strangely starts to make sense. The front brake is of the period and neither better nor worse than any other disc brake fitted to the sharp end of any machine bearing the winged badge emblem.

The rear drum is actually rather good with decent bite and levels of feel.

Born into an age of nihilistic hedonism, the CB500T made about as much sense as billing Bing Crosby as the opening act of a punk rock concert. The bike was essentially old before its time and it’s a supreme irony then that had the likes of BSA, Triumph et al offered machines like this in the early 1960s companies such as Honda might have struggled to get a foot in the door. Which is almost a back handed complement to this bike. It’s a fine machine in isolation but set against its peers it will forever be perceived as too little, too late.

And yet this all seems desperately unfair because the bike has no obvious glaring faults. It runs really well, carburates beautifully on those period constant velocity (CV) carbs, holds a decent line through bends if it’s not pushed too hard, actually sounds like a ‘real motorcycle’ and remains doggedly reliable. The more I rode the bike the more I actually liked it; it has character (despite being a Honda some might say), offers decent levels of comfort, never misbehaves or gets out of hand and simply gets on with the job it’s been assigned to. 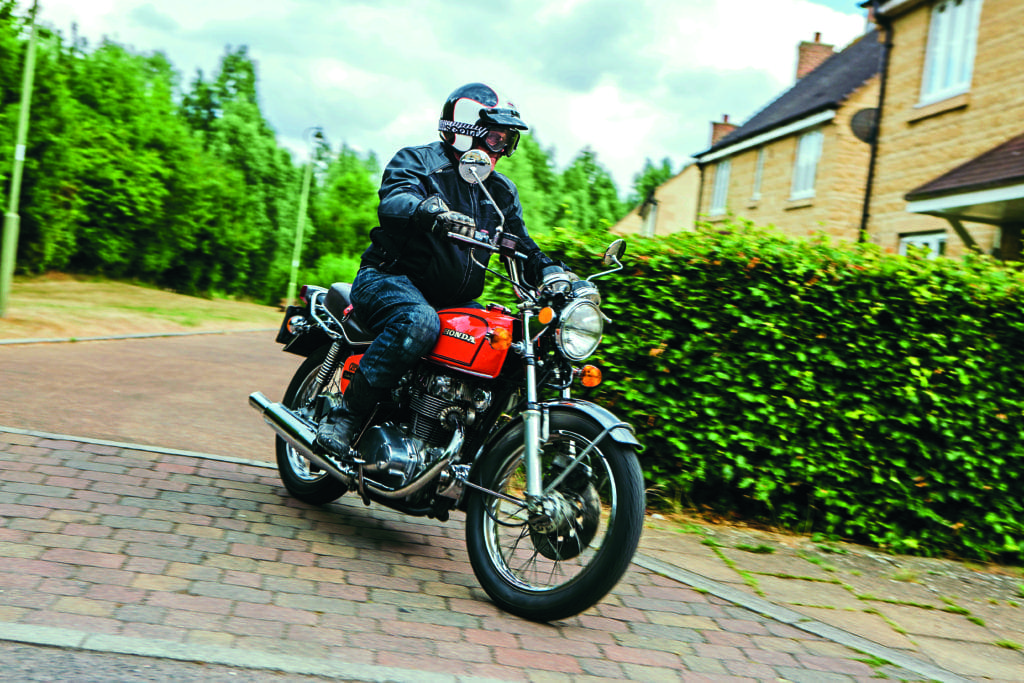 In a world where anything Japanese and over a quarter of century old is variously an established icon, sound investment or emerging classic, the Honda CB500T begins to make a lot more sense. Assuming you won’t be racing against a screaming 350/400 stroker, don’t have any financial or speculatory expectations or an uncontrollable ego then the bike actually makes a whole lot of sense. What’s more it’s a bike with the potential to undertake substantially more miles than many much more collectable bikes will ever experience.

As a low budget classic tourer the humble Honda twin actually makes sense, ditto using it one as a fair-weather daily commuter. The CB500T has gone down in the annals of motorcycling history as a lemon of fairly epic proportions which, at the time of its launch, it genuinely was. Four decades on it’s a quaint old Japanese twin that happens to come with an odd coloured seat, a reasonable turn of speed and a surprisingly decent level of comfort. Look beyond the rep, see past the strange colours and there in front of you is a bargain classic for stupidly little money.

For less than the cost of a restored 250 Superdream you can have a full half litre Honda twin. Reliable classic motorcycling really doesn’t come much cheaper than that!