The late Norton gearbox must be one of the best-known units ever made, although it was in fact an AMC design. Introduced on Norton, AJS and Matchless bikes in the 1956/57 season it was used on the former's products from then until production ceased with the Commando. Internal ratios are not identical across the range, and there are outer cover detail differences between Norton and AMC, but the basic dismantling, repair and assembly procedure applies to all of these gearboxes. The one shown here is from a Bracebridge street bike.

Models 19, ES2 and 50 with the single downtube frames have the advantage that the gearbox can be removed from the frame without the engine unit.

Then, with top and bottom gearbox bolts lifted out, the gearbox can be swung round until the fixing points lie approximately horizon­tal. The box can then be removed from the offside of frame.

With the Featherbed framed models, it is not possible to remove the gearbox as a separate unit. The engine/gearbox assembly must be removed together, but after this preliminary operation, the same procedure is used for the work on the gearbox. 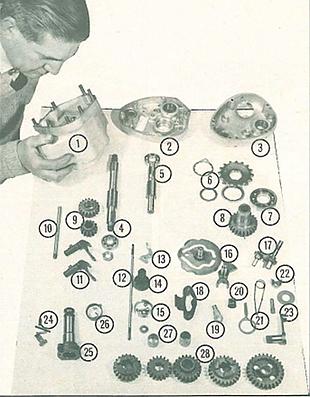 Outer cover removal begins with taking off the kickstart crank and the gear indicator, which must have its centre bolt unscrewed from the positive spindle, unless these have already been removed in order to lift the gearbox from the frame.

If the gearbox is on the bench, undis­mantled, it is best not to remove the gear lever. Remove the five screws holding the outer cover in position and then pull cover away by means of the gear lever. The paper between the covers may tear, so it is best to have a new one handy.

Reassembly is quite straightforward Ensure that all parts to be replaced are undamaged and perfectly clean.

Place the return spring in position and fit plate. Fit washer on to pawl carrier spindle, insert into bush and push home while getting spring legs into position in pawl pin groove.

Next, fit pawl spring with cranked leg to ground. Fit ratchet and spindle, then oper­ating lever and gear indicator before fitting the cover. The indicator may be used to move ratchet plate into position to pilot operating pin into selector fork while the cover is being fitted_

Assembling the inner cover is carried out as follows. Clean the case faces thoroughly and fit a new paper gasket. Examine the pawl cam and stop pieces riveted to the cover. Sometimes these can come loose and need re-riveting.

The pawl spring, plunger, pawl and pin can then be fitted and the axle slid into bush. Fit return spring.

Removal and reassembly of the camplate. Undo the domed hexagon nut from the forward side of the gearbox. This holds the camplate plunger. Two bolts with plain washers on the forward side of the gearbox shell must be removed to release the camplate and camplate quadrant When the bolts are removed, both of these can be pushed through into the box. Both camplate and quadrant are carried in a bronze bush, which wears very little, but can be easily pressed or drifted out should very long usage merit it.

To refit the camplate, place the quadrant in position, secured with its bolts and washers. The camplate must be positioned so that one of the end grooves in its circumference is across the centre of the indexing plunger hole in gearbox shell. The gear should be meshed with the last tooth but one on the quadrant.

The positive mechanism must then be assembled on to the inner cover, as described earlier. 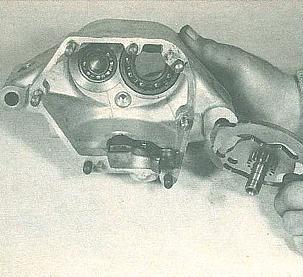 Gears into box
Fit the main gear wheel, pressing the wheel home in its bearing. Fit gearbox axle sprocket. You can tighten the nut and fit locking washer and its screw now, or leave it till later when the gears are assembled.

Check the fit of the layshaft in the gearbox shell ballrace— it should be a hand-push fit. If it's tight, ease the end with emery paper. Fit the third gear wheel (free pinion) to layshaft, followed by the fixed pinion. Fit layshaft into gearbox and oil mainshaft on plain portion and fit sleeve gear.