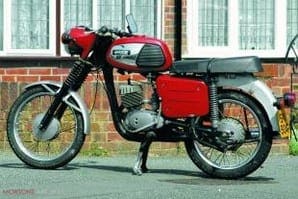 Although they fell out of favour in the late 1980s and early 1990s, as Communism crumbled, in the way of things they’re now being sought out again. Collectable? Well, to a degree, yes. Remember that doesn’t mean the same as valuable, though. After all, some people collect bottle tops and they’re not worth much either.

Anyway, in western Europe MZs were pretty well respected as budget bikes. They were always dirt cheap, because their prices were effectively subsidised in order to earn East Germany hard currency but they did the job they were supposed to. Lots of people ran them as cheap commuting hacks.

And because they were so cheap, folks used to lend them out, as casually as you’d lend a friend a ballpoint pen. “Your RD’s blown up again? Blimey, that’s the third time this year, isn’t it? Well, borrow the MZ if you like. Nah, that’s fine. Keep it as long as you like. Just bung it back with a full tank.” 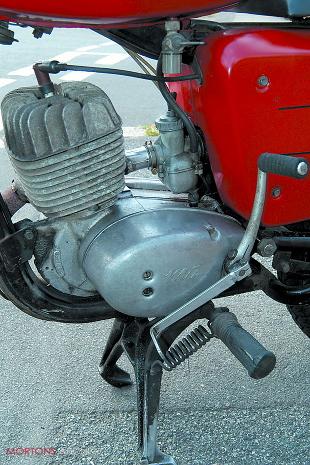 MZ were best known for their 250cc and, later, 300cc bikes. These benefited from rubber mounted engines – which made them super-smooth – and decent performance, certainly as good as the Japanese four stroke 250s of the day.

But they made smaller bikes as well. The little TS125, retailed for £227 in 1977 or half the price of a Japanese 125. For a few pounds more, you could have the TS150, outwardly identical but with just a little bit more oomph. Remember that in those days there was a 250cc learner limit, and there was a wide range of bikes available between 125 and 200cc.

‘Styling’ is a word you generally don’t associate with old Commie bikes but whereas most were dreadful travesties of Western designs (I once saw a Jawa scooter – it looked like it had used up the entire Five Year Plan’s output of cheap chrome) MZs were, well, ‘individual’ is the word I’d use. Functional, certainly. Remove all the badges and you could never mistake an MZ for anything else.

Practicality abounds. Look at those giant side panels. Spot the lockable compartment, which is big enough to hold toolkit, a bottle of two stroke oil and maybe a lightweight oversuit.

Look at that superb chain case with two simple rubber boots which allow you to check the tension without actually touching the chain itself. It makes you wonder why it was never copied, except by Yamaha on the old 1000cc TR1 V-twin.

Alloy levers (some cheapo bikes were still using pressed steel in the 1970s). Fork shrouds on long-travel softly damped forks, like a BMW. A truly massive headlight which, despite being only six-volt, throws out a superb beam. And the ignition switch has a setting that allows you to start the engine direct off the flywheel if the battery is flat.

Then you’ve got long-travel suspension and even little levers cast into the rear suspension units so you can adjust the spring pre-load without tools. A quarter of a century ago BMW was the only other manufacturer that did this.

Okay, so it still runs on pre-mix rather than separate oil injection but there’s a little measuring cup on the inside of the petrol filler cap which allows you to pour in the right quantity. With modern synthetic lubes, an MZ will run happily on 50:1.

The kickstarter is on the left, always awkward. It’s easier to start standing beside the bike. But that apart, it’s pretty well sorted. The basic switchgear looks a bit 1960s Lambretta-ish and the brake light only works on the rear brake. As for instruments, a speedometer and odometer is all you get. What were you expecting? On-board computers?

This one is in completely unrestored condition. Actually, I don’t think anyone really restores MZs; instead they sort of cannibalise them. Anyway, the chrome is reasonable, the frame paint has flaked here and there but is easily touched in, the transfers have vanished at some point but the paint is original and, while slightly faded, in pretty good shape. 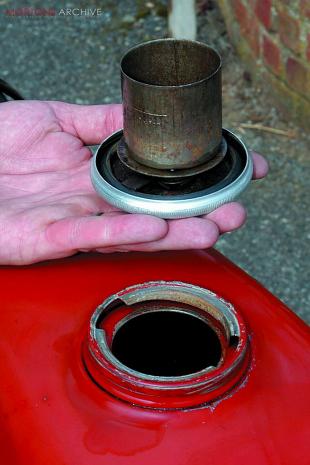 Caustic soda
The silencer has been cut in half at some stage and then re-welded, probably to de-coke it. I know, I know, but on this model the baffle is sealed in and not removable. Standard MZ de-coking involves filling the can with caustic soda, bunging up one end with a potato and leaving for a day or two before pouring out all the gunge, flushing with water, and refitting.

There’s a certain ritual to starting an MZ. The choke is really an enrichening jet – the carb is incredibly basic – and it’s not necessary on summer days.

Stand beside the bike, turn it over a couple of times on the kick, then turn on the odd ignition switch and it should burst into life.

First gear is quite tall and it needs a few revs and clutch slip for a decent getaway. Like many MZs, the TS150 has very little bottom end and tends to expire at the top end, choked by the long silencer, but it offers a healthy serving of mid-range power.

The gearchange can’t be rushed: try and do a Japanese-style cog-swap and it’ll graunch and crunch. Pull in the clutch, let the revs die a bit and then it snicks in. There are only four speeds in there. Third will take it up to maybe 55 mph and is quite useful. Fourth gives a happy cruising speed of 55-60 and a practical maximum of maybe 70 with a tailwind. It’s similar in performance to a modern Suzuki 125 four stroke single.

Brakes? Basic drums. The front is the same unit as fitted to the TS250 and while it mops its brow a bit on the 250 (Honda TLS front wheel swaps were a common mod) it works fine on the 125. This one wears an utterly horrible Siamese Rubber Co front tyre so squeals from the front are taken as indicative of truly crap rubber rather than truly great brake linings but it’s okay. I’m going to fit a decent tyre before the autumn rains come, mind.

The rear brake is quite fierce and contributes a lot to the stopping power. The riding position is typical MZ. Flat narrow handlebar and footrests way too far forward.

This conspires with the hard narrow seat to make it uncomfortable on long trips but you’d be surprised how many people do epic trips on these things.

They handle very well indeed. They have beautifully neutral steering and are incredibly steady in bends, almost Ducati-ish. With decent tyres on the rims you can really annoy much more modern sporty bikes in tight corners.

After a few days of riding the thing around London, using it as the Chateau’s shopping trolley, I discovered again why people are affectionate towards MZs. The things exude charm. They’re utterly honest: they don’t pretend to be anything other than cheap basic transport but at the same time you find yourself looking at things like the quality of the alloy and the paint, and realising that they really were built extraordinarily well. Sure, the ancillaries were always crude but the basic package was sound. It’s just that it belongs to another era.

This one needs a bit of cosmetic attention. The chrome’s peeled off the header pipe (they all seemed to do that). I’ll spray it matt black with exhaust paint. There are spots of rust on the chrome bars and rear shocks. The paint has dulled and faded a bit with age. I don’t really see the point of respraying it, though. The alloy is still in Grade A condition, so I’ll polish that up. Mechanically, it lacks for nothing.

For £160, which is what I paid, I really don’t care if it goes bang tomorrow! I mean, that’s bicycle money. I’m sure I could pick up a working 150 or 125 engine for a few quid anyway. That’s half the appeal of MZs. Nobody really cares what they look like or anything else, as long as they go, which they invariably do. 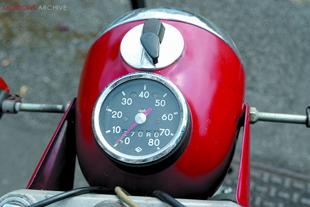 Worth restoring? Not really. You could spend time and money tracking down parts and get no return at all. Put it this way: I could spend £300 on this little TS and it would still only be worth a couple of hundred quid. Restoring one simply for nostalgic reasons is a different kettle of fish, of course. At least the parts are cheap.

Back in the 1970s and 1980s MZs were imported by the late Wilf Green of Sheffield. He put heart and soul into the business and in the late 1980s he spent a lot of money on building a new large warehouse and headquarters and then the Wall came down and he lost the MZ franchise. He really put MZ on the map in Britain, loved the product, and ran a very orderly market.

His legacy is that used MZs are probably easier to source in Britain than anywhere else except Germany. Ring-a-ding-ding.