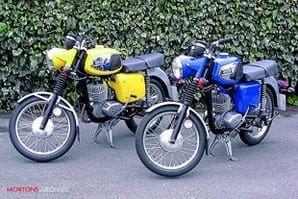 It’s a common assumption that your enjoyment of motorcycling increases with the sophistication of your machines and the cash spent on them. But if ever there was proof that you only need a simple, low-cost and reliable machine to provide a passport to distant horizons and a fulfilling social life then take a look at what the German-made MZ lightweights have to offer.

Many have scoffed at the idea that cheap bikes such as these have any virtue beyond ride-to-work utility. Yet there’s a huge amount of satisfaction to be had from riding a simple two-stroke single down leafy lanes to meet friends at some distant gathering. Part of the fun is getting there using limited resources, while their modest speeds enable you to better appreciate the scenery.

Before you think it’s just me waxing philosophically, there’s an arm of the MZ Riders Club with members who own several of the most basic versions of the East German two-stroke single and use them for touring hundreds of miles across Britain and Europe.

They are the TS125 and TS150 fans who love their bikes’ simplicity, honesty, robustness and economy. During my research for these MIRA Files features I canvas information from owners, but I’ve never had such an enthusiastic response as from this bunch.

For example, TS125 owner Don Cannon accompanied a friend with a BSA Bantam D1 to celebrate the British two-stroke’s 50th anniversary in 1998 by riding from John o’Groats to Land's End and back on B-roads, covering a total of 1623 miles. Eight years later he did it again when the friend’s Bantam clocked up its own 50 years, the trip taking 33 hours.

The connection between the MZ lightweights and the BSA Bantam is more than just their two-stroke engines. In the 30s Germany’s DKW factory at Zschopau was the pre-eminent European manufacturer, but after WWII its designs were given to a number of manufacturers including BSA, Harley-Davidson and Yamaha. In the now Communist East Germany, VEB Motorrad Zschopau, or MZ, took over the drawings to provide the cash-strapped and isolated population with the most basic form of powered transport.

In due course, MZ grew to be a force in road racing with rising stars such as Mike Hailwood campaigning the advanced disc-valve water-cooled two-stroke 125cc singles and 250cc twins designed by former rocket engineer Walter Kaaden through the 60s. 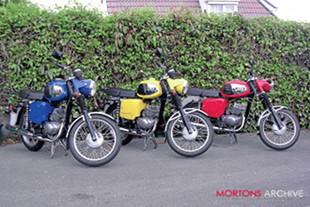 But the road bikes stayed faithful to their simple roots and were exported to the west, like the Czechoslovakian Jawas, to earn valuable foreign currency. With designers isolated in East Germany, it should have been no surprise when the MZs started to arrive in the UK that they were unconventional to British eyes. Some of the first were the ES125 and ES150 models of the mid-60s in which the fuel tank extended forward to encase the headlamp beneath which was a leading-link fork controlling the front wheel. By 1974, when I first road tested an MZ for Motor Cycle, the TS150 had evolved into a more conventional design and had features common to the bigger 250cc Trophy Sport.

It was a time in Britain of political unrest, power shortages and rapidly increasing fuel prices. “If ever there was the ideal bike for the age of austerity,” we wrote, “it’s the TS150.” It was one of the cheapest bikes on the UK market. But for your £217, including delivery, you got a full-size and roomy machine with a number of novel and practical design features. The frame, following common Japanese practice of the time, used a pressed-steel loop in two halves spot welded together, the rear subframe and mudguard being a one-piece light-alloy casting. The front end was almost identical to the 250’s with telescopic fork legs, a powerful headlamp and a handlebar with easy-to-use controls. Unlike the 250’s unusual 16-inch wheels, the TS150’s were 18-inchers with light-alloy rims. The fuel tank was big, holding 2¾ gallons: in all the TS150 looked substantial and parked alongside bigger-capacity machines didn’t look at all like a lightweight.

Its engine was about as simple as it could be made without losing its functionality. A pressed-up crankshaft ran in three ball bearings with drive by a roller chain to a multiplate clutch and four-speed gearbox with a direct top gear. A BVF carburettor drew air from a paper filter and fed the piston-ported air-cooled barrel while the exhaust was muted by a long chrome-plated silencer. A flywheel magneto provided ignition along with a 6v 90W supply for the lighting circuit, with an electro-mechanical voltage regulator. 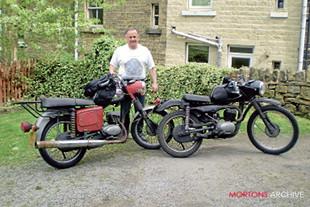 Appealing features included a robust cast-alloy centrestand and the option of a sidestand neatly located on the rear-wheel spindle and easily accessible. The best feature was the all-enclosed final-drive chain with polyurethane boots for the top and bottom chain runs, prolonging chain life substantially and enabling the tension to be easily checked.

Engine lubrication was by mixing oil with the petrol, a practice that was being superseded on Japanese two-strokes by separate pumping systems. Mixing was made easier for the MZ rider by using a measuring cup that was part of the lockable fuel cap: the mixture ratio could be a low 33:1 by lubricating the main bearings from the gearbox oil.

Finish was strikingly impressive with deep red paint and good-quality brightwork. The quality feel was backed up by a novel ignition key, rather like the BMW flat-twins of the day, which was inserted into the top of headlamp body and rotated to select the various options of ignition and lighting. 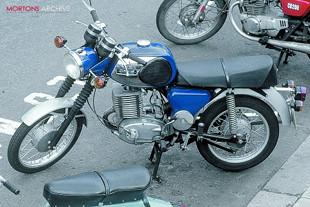 Starting was so reliable you could win bets on it, even with a cold engine. But you had to get accustomed to the left-side kick lever, which was on a shaft concentric with the gear lever, meaning that best practice was to stand on the left side and kick with your right foot. (Because the BSA Bantam engine was a mirror image of the DKW, it didn’t present this challenge).

Initially clattery, the engine’s mechanical noise was lost to the wind, whine of the transmission and the purr of the exhaust note. Acceleration was hardly worthy of the name, but enough to keep ahead of traffic in town. Practical cruising speed of the 150 was a modest 55mph, but its charm was in its flexibility, pulling cleanly from low revs with hardly any vibration. Only when holding 55mph or more for any length of time did vibration start to intrude through the seat.

For a bike weighing just 248 pounds with a gallon of fuel, handling was hardly an issue, but with well-damped soft springing the TS150 cornered pretty well, even if the steering was occasionally vague. The riding position and the steering benefited from the optional narrow, flat handlebar that gave the bike a decidedly sporty look.

Motor Cycle tested two examples of the TS150 at MIRA, in 1974 and 1977 and both times in January when conditions were hardly at their best. Each time, with different riders, top speed was around 66mph with the rider flat on the tank. Acceleration through the quarter mile was 20.7 seconds with a terminal speed of about 60mph, which was comparable with Japanese 125cc machines of the time.

Fuel consumption was miserly. For commuting it was possible to get more than 100mpg, giving a range of around 220 miles or more. But during my 1100-mile test fuel was used at between 75 and 82mpg. 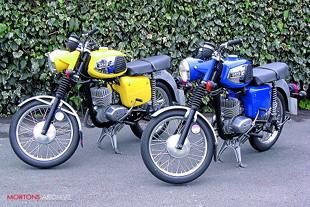 The MZ was also a bike of contrasts. While only using six-volts, the electrical system provided a surprisingly strong headlamp beam and a dazzle-free dip along with neat control switches. But the drum brakes were awful, both feeble and snatchy, a problem that afflicted all the drum-braked MZs I’d tested. James Mather, chairman of the MZ Riders Club, says the problem results from the non-floating shoe pivots and the poor leverage, because the mechanism is enclosed behind the brake plate. It can be sorted, but it’s an engineering job.

Other modifications include the conversion of the electrics to 12v, although owner Paul Griffiths thinks this unnecessary. “A new-type solid-state voltage regulator improves the lighting no end so I didn’t bother with 12 volts,” he said. He also says that if you’re planning long trips two up with lots of kit he recommends fitting the TS150 with the 125’s 15-tooth (one tooth smaller) gearbox sprocket.

MZ Riders Club Classics Officer Mark Dicker reckons the best improvement is to fit a VAPE electronic ignition system that also includes 12v charging. He is DVLA-approved so can help with dating machines “to get old bikes back on the road where they belong”.