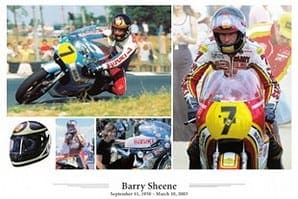 The British motorcycling scene was riding high in 1977, with Barry Sheene going for his second world road racing title, and the glory reflected in rising bike sales which were approaching 300,000 a year.

This was despite the final collapse of the established British factories. The Norton and BSA-Triumph empires as we had known them had gone. A smaller Norton rotary lump continued while the Triumph co-operative would limp on for another few years.

It was also in a time of political and cultural change. The Labour Government of Jim Callaghan was struggling and formed a pact with the Liberals. The first democratic elections were held in Spain after 41 years of Franco rule. We celebrated the Queen’s Silver Jubilee (with the co-op Triumph offering a Jubilee 750 twin). Technology advanced with the first space shuttle tests and the first optical fibres being used for telephone traffic. In a California garage, Apple Computer was created.

As one music era ended so another started. Elvis Presley and Marc Bolan both died in 1977, while Chris Martin, who would form Coldplay, was born that year. As the disco movie Saturday Night Fever was a hit along with the Bee Gees album, punk raised its head when Johnny Rotten and Sid Vicious released Never Mind the Bollocks and were banned from TV after abusing Bill Grundy in an interview.

If, in the motorcycling world, riders mourned the passing of fine-handling home-produced superbikes, there was hope – the Japanese were now offering machines with better dynamics.

Suzuki, making hay as Sheene grabbed the headlines, was leading this revolution with its first four-stoke, the four-cylinder dohc GS750 reaching showrooms in 1977 and soon followed by the equally impressive medium-sized GS550 four. In the face of tightening exhaust emissions legislation, it would be the last year that Suzuki sold its larger capacity two-strokes such as the GT750 triple. 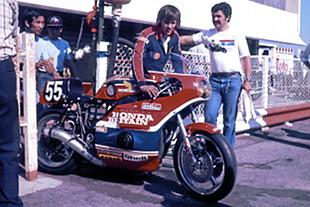 d a bombshell that it would be making a return to Grand Prix racing after a gap of 10 years. But its HRC racing team had already been fielding specially built RCB racers in endurance events since 1976 so it wasn’t such a huge surprise. These works bikes were initially based on the CB750 four-cylinder engine, an 810cc version of which Phil Read used to win the 1977 Formula 1 TT, and another world title, in the Isle of Man.

This development programme would lead to a new range of big Hondas in 1978. But the cat was already out of the bag, because plans by Honda to launch a stunning six-cylinder superbike, the CBX, were revealed towards the end of the year, and pictures were shown to journalists at the world launch of the radical liquid-cooled V-twin, the CX500, at Nogaro in France in December.

Kawasaki, now well established as the superbike king with five years of its Z1 derivatives under its belt, was selling the Z1000 version alongside the smaller Z650 four which had been launched the year earlier. The smaller bike proved to be a winner having already bagged a number of speed records in the US.

Yamaha was going through a complete transformation with first shipments of its XS750 four-stroke shaft-drive triple – launched the previous November in Morocco – arriving in Europe, followed by 250cc and 400cc four-stroke twins, all of which were performance tested at MIRA. And an even bigger bike was waiting in the wings. 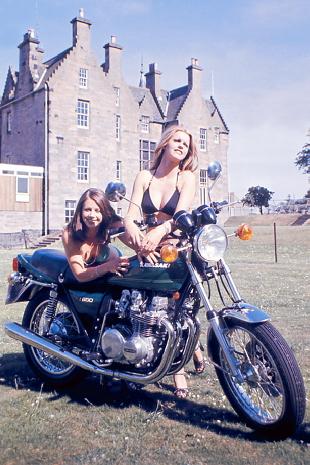 The MIRA test diary was as busy as ever with, from Italy, a wider range of MV Agusta 750cc and 815cc fours and a 350cc twin, all of which were backed up by better service support.  Other test bikes from Italy included Morini’s delightful 350cc Sport V-twin, Benelli’s four-cylinder lookalike of a Honda and Ducati’s awful parallel-twin 500 desmo, which was replaced with the Pantah V-twin two years later. The ‘soft’ version of Laverda’s 981cc triple, the 3CL, showed how raw power could be harnessed. BMW had launched its /7 series of boxer twins, with the 797cc R80/7 being added to the range with even more refinement. So there is nothing new about the 800 class.

Honda was also transforming its range of lightweights, that in 400cc form would sadly replace the popular CB400 Four. The idea was to offer twins adaptable to a number of markets including North America. In the UK we were offered the CB250T and CB400T with five-speed gearboxes and the novel CB400A with automatic transmission, all powered by ohc engines with six valves and balance shafts.

If your taste in Honda fours was unsatisfied by the stock CB400F and CB550F, then south London dealer Mocheck offered the 460cc Harrier using experience from racing at the TT, while David Dixon offered the 600cc version of the CB550F with Yoshimura tuning parts.