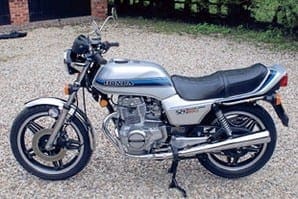 No one who wanted a Super Dream was ever lining up an RD, GT, KH etc in their sights and given the other four-stroke offerings on hand (Yamaha’s XS250 or Kawasaki’s Z250) perhaps there was a modicum of logic in their choice. The sad thing was that the 250N was just as tedious as the Honda G5 and CJ that had preceded it. Okay, it may have been the Captain Sensible of the learner world but it’s hard to see why. One thing in its favour was that it had a passing resemblance to the dohc 750s and 900s that Honda was marketing at the same time so perhaps aspiring owners were basking in the bigger machine’s reflected glory. If so it’s one hell of a reason to buy a motorcycle.

If prospective owners were banking on buying into legendary build quality they were in for a rude awakening. Rear shock absorbers (labelled FVQ) failed in relatively short order and when some wag dubbed them Fade Very Quickly the moniker stuck. Fuel tanks rotted out in surprisingly short order as some Japanese numpty had seen fit to fit the tap several inches above the bottom of the tank; guess where all the water collected? The CB400N showed just what the basic architecture was capable of so why did Honda opt for two different ignitions on the 250 and 400? The latter ran a Hitachi system that was capable of withstanding pretty much everything short of a direct hit from a thermonuclear warhead. The 250 had a Nippon Denso system that was afraid of its own shadow and could trash its coil windings, generators, pulsar coils and/or CDI if someone said boo to it. Of course, as might be expected, the 400 ignition would not swap over to the 250 leaving the owner no option but to replace it with another ND unit. Allegedly dealers made a good margin on lucky rabbit’s paw key rings.

For all its failings the CB250N sold in droves; it’s said Honda shifted more than 40,000 in one year alone. Maybe it was just that there was no other viable alternative and the buyers were presented with a simple case of Hobson’s choice. Whatever, for several years the damn things sold like hot cakes. Perhaps the last word on the subject should go to a staunch Honda enthusiast who perversely owned a Suzuki dealership. Said trader had bought his shop which had a large stock of Honda parts, customers and good will but no longer held the franchise. Having taken in a Super Dream in part exchange he needed to make a quick trip to the bank and grabbed the keys to the first machine that came to hand. Firing up the CB250N he rode off, completed his business and dropped the bike off in the yard behind the shop. Handing the keys to the workshop foreman later that day he commented: “Geoff, put the Dream through the workshop before we offer it for sale; it couldn’t pull the skin off a rice pudding”. Said mechanic replied: “Already done it, they’re all like that boss, gutless unless you thrash the pods off ’em.” The dealer still questions to this day why he struggled to sell his Suzuki GSX250s against what he refers to as the blandest 250 ever made.