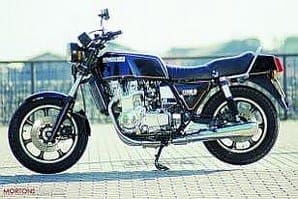 Soon after Kawasaki had launched the legendary four-cylinder 903cc Z1 in 1972, its product planners were thinking about a successor that would maintain the factory’s lead as a performance bike manufacturer.

According to factory documents, a meeting at the Akashi factory in Japan in June 1973 established the guidelines: the bike would have a large capacity engine and, remarkably in view of the outcome, it would be as compact as possible. Its four basic features were that it would have a water-cooled engine of about 1200cc with six cylinders and shaft drive.

With a target of a launch in late 1978, Kawasaki’s planners and engineers had five years to develop what would be the factory’s flagship. Under the project code ‘Model 203’ distributors and dealers were consulted about the machine’s basic specifications.

Other configurations
Traditionalists questioned the wisdom of a larger machine than the Z1 and Z1000, which were thought to be large enough. Other configurations were considered to break away from the familiar Japanese four-cylinder layout. Requests for a V-four were studied but the six-cylinder in-line layout was adopted because, as the factory said at the time, it would best dramatise and progress Kawasaki’s performance image.

Drawings were completed in April 1974 and by September 1975 a functional prototype of Model 203 was fabricated, followed by another with major changes to the design that appeared in August 1976.

By now, Kawasaki’s 1000cc fours were being developed to meet the needs of specific sectors: the Z1000ST with shaft drive would be a sports tourer and the Z1000 Mk2 a supersports machine. The six-cylinder Model 203 would have to offer more. Pictures of one prototype show that a sports-styled version featured a clutch on the left side of the engine and huge-upswept silencers, a design that was obviously discarded.

But Kawasaki wanted Model 203 to be the biggest and most powerful machine on the road. Even as late in the development cycle as January 1978 when refinements were being made to the pre-production models it is said to have reacted to Harley-Davidson’s bigger V-twins with the testing of the 1286cc engine alongside the 1200cc version.

With the decision to go for the 1286cc six, the development paced hotted up. Within two months the first pre-production model was being evaluated and a second was produced in the July – two months from launch – for final tuning and styling touches.

On cue, the Z1300 appeared at the Cologne Show in September 1978 and stunned fans with motorcycling’s most potent-ever machine boasting 120bhp. But it was also big, with a 62.2-in wheelbase, and heavy, weighing more than 650lb dry.

Available information at the launch was limited, but two months later a German magazine revealed the internals of the engine with a cross-section drawing. Key features were that to keep engine width to a minimum of 25in, internal dimensions were undersquare – with narrow 62mm bores and a 71mm stroke for the seven-plain-bearing 120-deg one-piece forged crankshaft. Hemispherical combustion chambers each had one inlet and exhaust valve opened by double overhead camshafts. These were operated by a chain driven from a countershaft behind the crankshaft, again to keep the width down. The countershaft was part of the transmission, driven by inverted-tooth chain from the centre of the crankshaft with another inverted-tooth chain taking the drive to the clutch and five-speed gearbox, with the associated sprockets incorporating a sprung-loaded shock absorber.

The transmission was unusual as well because in addition to the mainshaft and layshaft being supported in huge double row ball bearings, another shock absorber was located on the left end of the layshaft, through which a quill shaft took the drive to the final drive bevel gears on the right side.

Modest compression ratio
Though the peak power of 120bhp at 8000rpm was daunting, the specifications revealed a modest compression ratio of 9.9 to 1 and valve timing common to other Kawasaki engines: 270-degrees of opening on the inlet and 280-degrees of exhaust. Nonetheless the power was peaky with a distinct rise in the activity above 5000rpm, influenced no doubt by the convoluted inlet porting from the triple dual-choke 32mm Mikuni carbs designed, also to keep the width down between the rider’s knees.

To lubricate and cool all this, the wet sump held 4.2litres of oil. It wasn’t enough, and the capacity was increased after a year of production to 5.3litres.

It was a huge engine and called for a huge chassis to accommodate it. Yet the tubular-steel duplex cradle frame was conventional, just massively designed along with a robust leading axle telescopic front fork with 41mm stanchions and a massive swingarm at the rear to hold the rear wheel’s bevel casing.