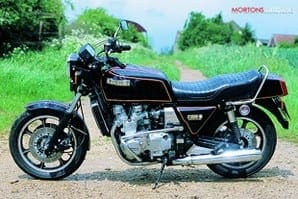 The colossal six cylinder, watercooled Z1300 came along just a year after Honda’s own ‘six’, the CBX. That had been awesome enough but the Zed boasted 15 more horses at 120 bhp!

Fierce debate in the bike press was already under way about just how far the Japanese could go in terms of power output and there were rumblings of government legislation unless something was done to curb the horsepower race between the Big Four. The voluntary 125 hp agreement was introduced in Britain to head the politicians off at the pass.

The Z1300 was powerful alright but the engine alone weighed more than a 125cc bike of the day. With its shaft drive and the six gallon tank filled with petrol it tipped the scales at a massive 660 lb.

I remember being distinctly unimpressed in Cologne that year, dismissing the huge thing as a dinosaur and never bothering to get around to riding one – the GS1000 Suzuki or Z650 Kawasaki being more to my taste at the time. 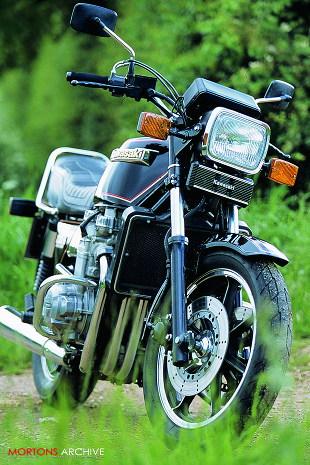 In fact, the GS1000 ran the Z13 very close in straight line speed and would leave it standing on the bendy bits. So what was the point? And how come its production run would carry on for ten years during which 20,000 were sold?

One-upmanship in the power race was probably the reason but testers of the day enthused about the bike’s smooth power delivery and effortless 100 mph plus ‘cruising’ speeds – ironically, only acceptable on autobahns in Germany, where the voluntary power limit was 100 bhp…

Like the magazine Superbike said in 1979, “As an exercise in corporate one-upmanship it’s a dazzling success, which isn’t altogether surprising considering that this is its raison d’etre. What is surprising is that, lurking under the tinsel and technology and almost secondary to this central purpose, is a surprisingly good heavyweight bike.”

Kawasaki had conceived the idea of the Z1300 back in 1973 and opted for watercooling and just two valves per cylinder to keep the engine relatively narrow. Three carburettors fed the cylinders, in contrast to the CBX’s angled bank of six.

There was nothing sophisticated about the frame – a conventional but substantially beefed-up version of the twin cradle designs of the day. Suspension was equally standard with sturdy air-assisted 41mm leading axle front forks and simple twin shocks at the rear. Testers of the day reckoned it handled quite well for a bike of its size. Not a view shared by Dave Marsden of Z-Power (01942 262864) who was a parts manager for a Kawasaki dealer in those days.

“It handled quite well compared to a pig on stilts,” he said in his Mechanics Z-Files article in 1999. “Just what were those road testers on?”

As Dave reported, the Z1300 was not without its problems. Fork seals constantly leaked, front brake discs warped, the rear disc would seize and the rear shocks were virtually worn out after 2000 miles. 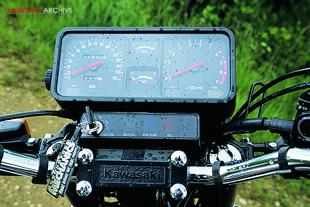 So what was in store for me as I headed for Bourne in Lincolnshire one sunny Sunday morning for a debut ride on Kawasaki’s mammoth? One comfort was that this bike was one of the very last Z1300s made with, hopefully, improvements to the problems highlighted by Mr. Marsden.

Many of the early faults were dealt with under Kawasaki warranty and at least in the suspension department this bike would have better forks and air shocks at the rear. Another big difference was that this bike featured fuel injection instead of carbs, introduced on the model in 1984. Fuel injection was said to raise the power to 130 hp.

Mechanics reader John Penney (we’ve tested some of his bikes before) contacted me last year with a offer of a ride but winter weather closed in and we postponed until a climactic improvement.

His bike is a Z-G1300, first registered in 1990 but built in 1989, its last model year. John, a police patrolman (in cars, not on bikes) bought the bike last July in Peterborough. It was up for sale for £4000 but he managed to get it for ‘substantially less’.

He is the third owner from new and toured the North Yorkshire Moors on it, loaded with luggage and his wife on the pillion. “It’s comfortable but not the best in corners,” he said. “But we did 1000 miles and the air shocks and forks made it feel like it was just wafting along.” The clock now shows just 11,600 miles. 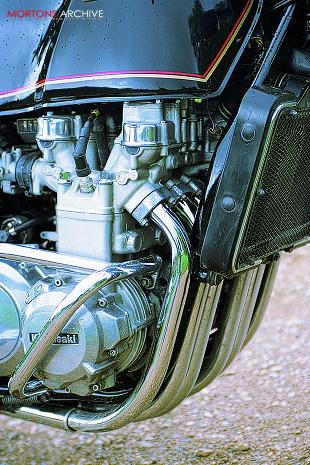 John believes the later Z1300s were built in America and this might be borne out by the presence of a ‘cruise control’ button in the switchgear. All that horsepower and a button to stop you exceeding 55 mph. Bizarre…

Snapper Terry Joslin arrived and with the sun still shining – but showers forecast – we headed out of Bourne on the lovely stretch of road that is the A151 to the Corby Glen junction on the A1.

The fuel injection bikes have a ‘fast idle’ switch rather than a choke and as the 1300 warmed up I remarked that it didn’t tickover in the silky smooth way described in old road tests. Then again, it wasn’t yet warmed up and John assured me I’d notice the difference.

That 660 lb weight soon made itself apparent as I nervously negotiated the junctions around the housing estate to the main road. This would take some getting used to. In fairness, the shaft drive was very smooth, no trace of transmission snatch at all like on big v-twin Guzzis. But at slow speeds like this on a bike I hadn’t ridden before (and someone else’s bike at that) I didn’t feel particularly confident about holding it up if I had to ‘take a dab’.

Initial wobbles behind me, we headed for the villages of Edenham and Grimsthorpe. With clouds gathering we elected to get the riding shots done before I had the opportunity to get really acclimatised to the bike. 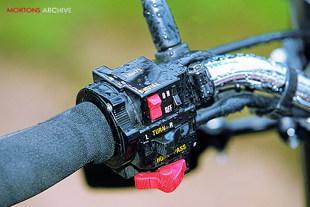 But it soon became apparent that this bike would not respond to too much ‘rider input’. Welting up to a corner as you crack down through the five-speed gearbox and then lay it in and accelerate around is wasted effort. That just appeared to get the front end wavering under all that power.

Rhythm is the answer. Don’t try and force it. The more I rode it the easier it got just to sit there and swing it through the bends rather than steer it. Backing off or opening the throttle to drive it around is no option. Smooth and neat is the style.

The engine, however, is sublime. Now fully warmed up and ticking over like a Swiss watch, just a slight breath of throttle had the big Zed rocketing forwards with the six-into-two exhaust system howling with an unexpected shrill wail. A lovely sound.

The red line is at 8500 rpm. Leave it in top and open the throttle a 2000 rpm and the arrow streaks towards it in the time it takes to blink. Top speed is said to be 140 mph. Had John attempted to go this far? “I wouldn’t want to try,” he said. 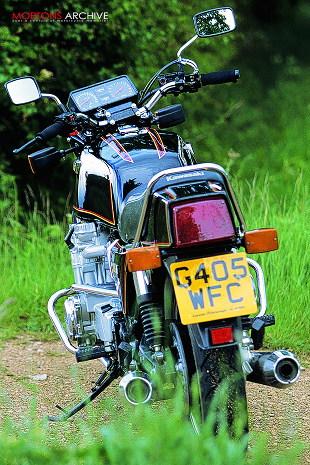 I don’t know about that. Despite a couple of hailstorms and consequently wet roads I was beginning to warm to the Z1300’s mighty power delivery and whacking it up to 100 mph demonstrated its straight-line stability. It’s phenomenally fast and steady with no sign of front end nervousness under power. This is a bike for long distance, fast touring.

Even allowing for Dave Marsden’s earlier misgivings about the handling of the early bikes, the late model handled reasonably well, given the right sort of riding style. On a smooth, fast track I’d even bet on it out-cornering a CBX in the right hands. As for the GS1000 though, no chance.

The steering is slow with its long wheelbase but point it where you want to go and the bike will do the rest.

The Z1300 will never be regarded as a milestone in bike development like the GPz900 was. The big musclebike’s of the Seventies were already nearing their sell-by date when this bike was launched and the Japanese were already developing lighter, more compact bikes with just as much power and handling to cope with it.

Should you own one today? Well, I’ll quote our own Neil Murray, who said in Mechanics in December 1993, “Don’t write off the 13 as a useless lump. It really works very well, especially as a tourer. While not yet really collectable, it certainly will be in the near future. Any well-kept model is unlikely to depreciate.”