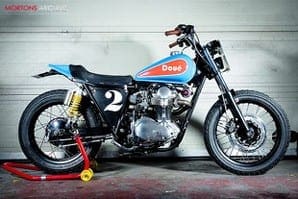 Sean is the workshop manager at John Carr Motorcycles in Alfreton, Derbyshire – a job that helps when it comes to a project. Having access to the right tools and equipment means you’re never short of anything and, with an understanding boss, he was able to work on his bike during shop hours too.

Sean had been looking for a neglected or damaged W650 for a while but couldn’t find one, so ended up buying from a dealer in Croydon. He paid £2700 for the bike, quite expensive considering the plans he had for it. When asked why he chose a W650 Sean told us, “They’re a good reliable tool. It’d done 20,000 miles but when I stripped it I didn’t even need to adjust the tappets. In my opinion they’re a better bike than the Triumph; they’re light and nice where the Triumph is just heavy.” 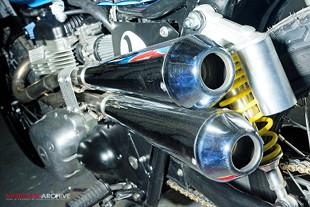 Flat Track has grown in popularity in the UK in recent years, it’s a hard sport, exciting to watch and not anywhere near as easy as it looks. So what made Sean decide to build a flat tracker for the road? “Why not?” he laughed. “I saw a picture of the Australian Deus Ex Machina specials and thought I’d do something along those lines but my interpretation of it, not theirs.”

If you look at the finished bike it’s hard to recognise it but there are quite a few standard parts left – the wheels, forks, swinging arm, engine and even the handlebars are stock. Sean bought some flat track bars but when he put them up to the W650 ones they were both the same so he didn’t bother using them. He told us: “Apart from those parts pretty much everything else has been replaced. The carbs were from Canada, they were off a snowmobile. The brake disc was from eBay, I changed the gearing (one tooth off the back and two on the front), it also had a new DID chain and sprockets. The rear shocks were from a company in France called Easy Fit and the exhaust was built especially for it by Wayne at JAC in Hucknall. He wasn’t too busy at the time so I dangled a carrot and he turned it around in two days. I also fitted a Monza fuel cap, which took a bit of doing, the clocks are standard but I used a handlebar gear selector from an Aprilia Mana to replace the horn and starter button, I also had a hand stitched custom seat made.”

There are plenty of minor mods if you look around the bike, like the black rims which have been re-spoked, the modified frame with lower ride height, stainless and alloy parts here and there and the front number board which fixes on quickly using Dzus fasteners and hides the discreet headlamp. 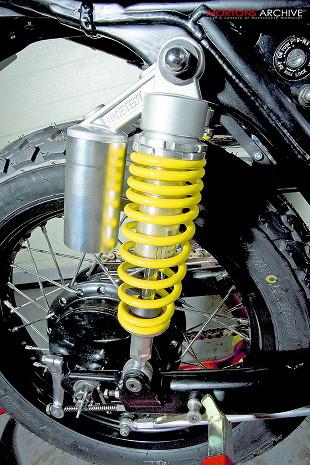 I’m sure if any of our readers have tried to build a project bike they’ll know it almost always takes far more time and money than was planned. Sean’s bike took just five weeks from buying the bike to finishing it. He said: “The powder coating held things up, it sat in the office of a firm for a week, so I collected it and took it to Shirebrook Motorcycles instead.” The project wasn’t cheap either, with items like the 19in rear Dunlop K180 having to be sourced from America, at a cost of £250; the bike ended up costing over £6000.

The paintwork looks superb and really sets the bike off. Sean told us: “It’s Gulf…ish, I always liked the colours and it had to be something noticeable, to catch people’s attention. It was done by Dream Machine. The word doué is French for special or gifted.”

With the paintwork barely dry and the snowmobile carbs still in need of re-jetting I was lucky enough to have a ride on the bike. It growls and barks through the custom pipes, and although the engine is still a little boggy due to the carburation, it pulls well (the replacement jets had only just arrived on the day of the photoshoot). The bike has a lazy feel to it; the wide bars and riding position are comfortable and it turns heads everywhere it goes. This bike and its builder are doué for sure.