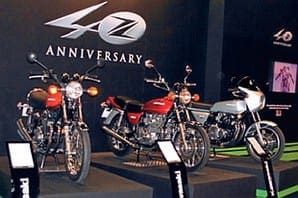 Many CMM readers will remember it all started in 1972 with the now iconic 903cc Z1 Super Four motorcycle being launched in Europe at the IFMA show in Germany to widespread public acclaim.

Run in partnership with the Z1 Owners Club, the six machines in the anniversary display ranged from an immaculate original 1972 Z1 to the first fuel-injected 1000cc Kawasaki and the landmark six-cylinder Z1300. All the bikes displayed were privately owned and many still ridden daily.

Martin Lambert of Kawasaki Motors UK says: “The year-long celebration of the 40th year of the Kawasaki Z family is coming to a close but, for us at Kawasaki Motors UK, there are still opportunities to highlight some of the many significant models that have appeared over four decades.

“With a display of six machines on a special Z40 stand at Motorcycle Live, we had a unique chance to speak to show visitors about machines from the original Z1 to a Z1000 concept bike that many have requested be put into production.

“With the cooperation of the Z1 Owners Club who have manned the stand, we have spoken to, enthused and engaged with hundreds of former, current and aspiring Z owners and sold a good few hundred Z40 posters in aid of charity. One thing is for sure, there is still a huge groundswell of interest for heritage machinery and we have been delighted with the interest shown in the Z40 stand.”