Few highlights in a career of performance testing motorcycles stand out as vividly as when we were forced by the limitations of space on MIRA’s timing straight to take Kawasaki’s GPZ1100 – completely redesigned and tuned to be the world’s fastest roadster – to the Midland facility’s mile-long straights.

On that last day of August 1983, this Kawasaki was one of a new breed. When the GPZ1100 reached the lights it was still accelerating, even though according to the rev counter it was still way beyond the power peak at 8750rpm.

I needed more space – so we switched to the mile-long straights. There wasn’t any timing gear, but by calibrating the rev counter on the timing straight I could work out the speed to the nearest mph with a degree of confidence.

Stretched out over the long red tank, riding the GPZ1100 was intoxicating even at modest speeds. The fairing and bodywork had been redesigned to accentuate the image of speed and the lowered forged-alloy handlebars allowed you to tuck inside the fairing comfortably to avoid the wind. 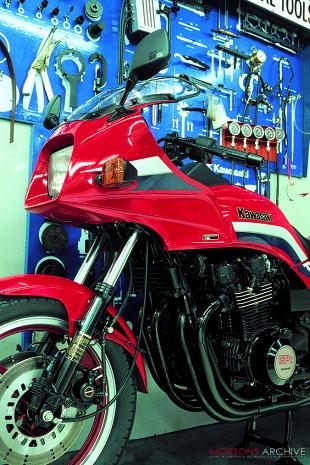 Below, the wailing 1089cc twin-cam fuel-injected four-cylinder engine made easy work of rushing the bike through the gears to fifth. Rubber-mounted at the front, the engine felt smooth, willing and eager, Kawasaki’s engineers having tuned it to punch out 120bhp at 8750rpm, more than any four-cylinder motorcycle engine.

Chinning the tank, I could see the rev counter passing the 9600rpm in top gear it had peaked at on the timing straight, clocking more than 146mph. I wondered how mechanically safe the engine was. Revving through the gears is one thing, but holding it at those revs for what seems like an age is another matter.

OK, it wasn’t a properly timed speed, but as far as I was concerned the GPZ1100A1 was the first road bike I’d tested at more than 150mph at MIRA.

Even more remarkable – and a testament to the progress that had been made with aerodynamics at Kawasaki – was that through the timing lights I had clocked an average of more than 139mph sitting normally without making any effort to tuck in. This was one strong motorcycle.

But the price of this performance – in addition to the £2999 dealer tag in 1983 – was a peaky engine that was less responsive at low revs than its 1100cc competitors from Suzuki and Honda and oil-tanker-like handling that only came into its own at high speeds. This only accentuated the image of what was a blisteringly potent machine which would be the final blast in a series of air-cooled four-cylinder Kawasakis that had made the factory the performance king since the Z1’s launch in 1972.

Completely revised
The first GPZ1100 came out in 1981 alongside the completely revised but still traditional-looking Z1000J which in itself was a tuned-up Z1 boasting 102bhp. The GPZ came with clever-looking instruments above a rectangular headlamp, more tunable suspension, a fiery red paint scheme, fuel injection and 109bhp, according to the spec sheet.

Fuel injection was a nod at future emissions regulations but still in its infancy and suffered no end of problems. EFI spelt the future, and was aimed at a rider market that might find the really sporty look of Kawasaki’s Z1000R Eddie Lawson Replica introduced in 1982 as a bit too hard-core. 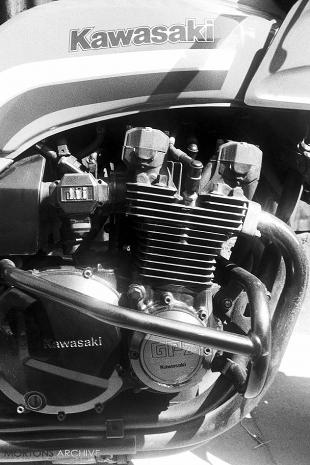 For all its technical one-upmanship, the GPZ1100 didn’t hit the spot with professional riders of the time. I found its handling wayward at speed despite the adjustability of the air-assisted front fork and rear shocks, and the rattly engine a mite too harsh, not coming into its sweet spot until above 4000rpm. The riding position, not much different from the Z1000J, was perhaps a bit too tall for really high-speed riding. But then who rides above the ton on a naked bike these days?

The 1982 version of the GPz1100 came with a mini fairing for the headlamp and digital fuel injection linked to the ignition system. Again, it was a harsh beast, and suffered alongside Suzuki’s revised GSX1100E, now with an engine boasting 111bhp, when I tested both bikes at MIRA in August 1982.

Although the Kawasaki peaked out with a best one-way speed of 139.59mph on the timing straights, its average was 135mph, slightly down on the Suzuki’s 136.2mph.

A grabby clutch on the Kawasaki also stunted the quarter-mile performance, with an average two-way figure of 12.22 seconds at a terminal of 112.73mph, almost half a second down on the Suzuki’s 11.65 seconds at 114.6mph. Some might say this is quibbling, but it was the manner in which the Suzuki could reel off the figures so much more easily that made it impressive.

Stopping the beasts from speeds close to 120mph repeatedly in quick succession was an eye-opening experience as well. Both their front dual discs turned blue with heat and they felt spongy after a few runs, but the Suzuki’s anti-dive valving on the fork reduced the drama. The more powerful brakes on the Kawasaki were easier to lock up and the way in which the front fork bottomed under braking did nothing to help the bike’s stability, which was already marginal at over 120mph.

The next incarnation of the GPz1100 was available for testing towards the end of the summer of 1983. The new bike, with its long wheelbase and swoopy styling, looked great but I collected it with a cautionary message; it had strange handling habits – the least of them were steering wobbles exiting fast curves – that had been attributed to loose head bearings, a suspicion that was mistaken.

Two miles a minute
Not wishing to dump the bike at more than two miles-a-minute my solution was to correct the rear tyre pressure, crank up the damping rates on the fork and single rear shock and generally tauten up the chassis. It wasn’t completely satisfactory of course, because this was a machine made for high speeds. At anything below stellar speeds it felt like a barge, not helped by the wheezy nature of the engine at lower revs. 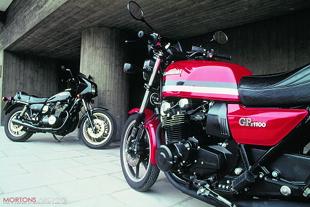 On the mile-long straights the bike clocked 9600 in one direction and 9950 in the other. That equated by my reckoning to a best of 152mph, which indeed was the calculated speed give or take an mph. Either way the bike was a genuine 150mph topper, and that feat alone it earns its place in the history books.